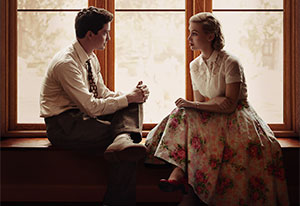 James Schamus — acclaimed screenwriter (The Ice Storm; Crouching Tiger, Hidden Dragon) and producer (Happiness, Brokeback Mountain) — makes his directorial debut with this painterly and insightful adaptation of Philip Roth’s 2008 novel, a look at a young Jewish man from New Jersey who heads to a small Midwest town. Indignation had its world premiere at the 2016 Sundance Film Festival to major critical acclaim.

Amidst the conformity and political conservatism of 1950s America, Marcus Messner avoids the Korean War draft and joins a Christian college in Ohio instead, but finds himself at odds with everyone from classmates to the dean, especially in matters of religion, or lack of it.

A relationship with a troubled, provocative blond promises at least a sexual awakening, but even something as physical as that connection only leads to more intellectual doubt, and possibly something even more challenging.

Schamus, who defined the American independent film scene of the 1990s and 2000s, brings the same grasp of human frailty and interpersonal dynamics that his award-winning script for The Ice Storm demonstrated, balanced with a veteran’s feel for cinema brought from a lifetime producing some of indie film’s most prestigious, elegant works.