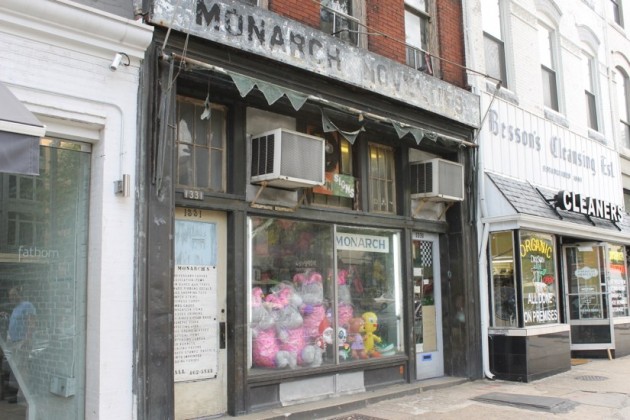 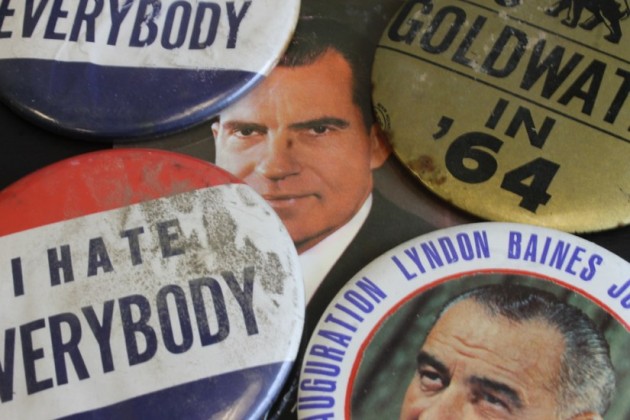 To some locals, the run-down shop is an eyesore.

“I can’t wrap my head around how it’s stayed open,” wrote a PoPville forum user last June. “Are any of [these buildings] slated to get torn down and rebuilt into new condos? Or will this block lag behind the rest of 14th for all time?”

But inside the shabby shop overshadowed by luxury condos and flanked by trendy bars lies a wealth of history and an assortment of odd items that are hard to find elsewhere in D.C.

Douglas Robinson, Monarch’s owner, is always the first person patrons see upon entering. From behind a small table cluttered with pads of paper, a rotary phone and a worn-down cash register, Robinson buzzes in customers, then watches them with an unwavering gaze. From time to time, he rises from his chair to follow shoppers as they browse, presumably to make sure they’re not pilfering raffle ticket rolls, plastic party hats, old postcards, finger traps or vintage political buttons inscribed with slogans like “I Hate Everybody,” and “Go Go Goldwater in ’64.”

The eclectic assortment of wares often prompts patrons to ask whether they’ve wandered into a store or a private residence. But Robinson, who actually does live above the store, always replies the same way: “You can shop here, as long as you have green currency.”

Many of the store’s wares come from garage sales, roadside stands, and going-out-of-business bargains. And those items are likely cheaper than you’d find elsewhere. Vintage buttons, for instance, sell for between $2 and $5 apiece. Postcards decorated with the portrait of President Nixon are fifty cents.

On a street where a night of cocktails might cost as much as a new pair of shoes, that’s quite a bargain.

Robinson, who’s lived in D.C. for 64 years,  also likes to dispense historical knowledge. “President Johnson used to go to mass at the National City Christian Church,” he says softly to a patron holding a Lyndon B. Johnson inauguration button. “This city has gone through its ups and downs. Lots of changes.”

Of course, Robinson has his quirks. For instance, photography is strictly forbidden in the store. He also has a unique and quiet way of speaking, so it’s not always easy to understand what he says.

Fathom Creative founder Drew Mitchell has lived and worked in the building next to Monarch Novelties since 2009, and has gotten to know Robinson well.

“He’s a little like cotton candy that’s been sitting in the sun for a little too long,” says Mitchell with a laugh. “Kind of hard on the outside, but really warm and approachable when you get to know him.”

“He knows every bus route, every street, every building,” Mitchell says. “He’s explored every nook and cranny of the city. He has the memory of an elephant.”

But how can a store that sells plush animals and kazoos stay open? When asked, Robinson is tight-lipped. But Mitchell says he fields that question a lot.

“A lot of people think, with the rent on 14th Street, how in the world does this place exist?” says Mitchell. “His family owns the building outright, so [they can afford it].”

According to the D.C. Office of Tax and Revenue, the property is owned by Lilly Robinson, and is worth over $1 million.

“It’s one of those places that gives our neighborhood its urban texture,” says Mitchell. “It can’t be manufactured.”

“We’re the last novelty store like this left,” Robinson says with a smile. “We’re the only ones.”