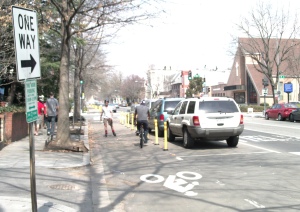 The 15th Street bike lane is on the west side between the curb-sidewalk and parked cars. (Borderstan)

The DC Department of Transportation (DDoT) has just put out an online survey on the 15th Street bike lane and traffic configuration. There are 48 questions and it will probably take about 10 minutes to complete the survey; there are also numerous places for written comments. The questions cover the bike lane as well as current traffic conditions and general safety on 15th Street, especially for pedestrians.

Paper copies are also being distributed to residents on live on or near 15th Street between Massachusetts Avenue and U Street NW.

The contraflow bike lane was installed last November after extensive studies about what to do with the 15th Street traffic pattern–one of the options was to make 15th Street two-way, adding southbound traffic.

END_OF_DOCUMENT_TOKEN_TO_BE_REPLACED

The 15th Street NW bike lane has been operational for a couple of weeks. What’s your opinion of it and its effect on this stretch of 15th Street? The bike lane is a pilot program, and the city says it will review the street’s new configuration after one year to see how it is working out.

Note: Read WashCycle’s take on the lane and other future options.

END_OF_DOCUMENT_TOKEN_TO_BE_REPLACED 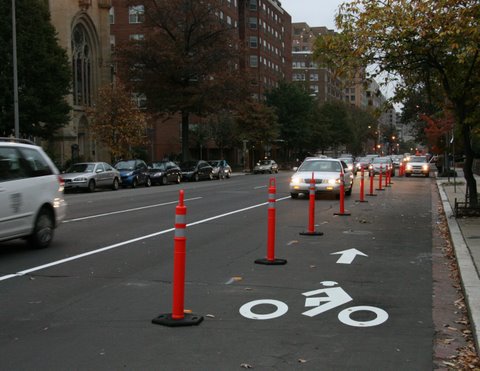 The rain is gone (for now) and DDoT was finally able to get started on the southbound bike lane on the west side of 15th Street NW. Yes, bikers will ride southbound on a one-way northbound street, between the curbed and parked cars–from Massachusetts Avenue to Florida Avenue NW. 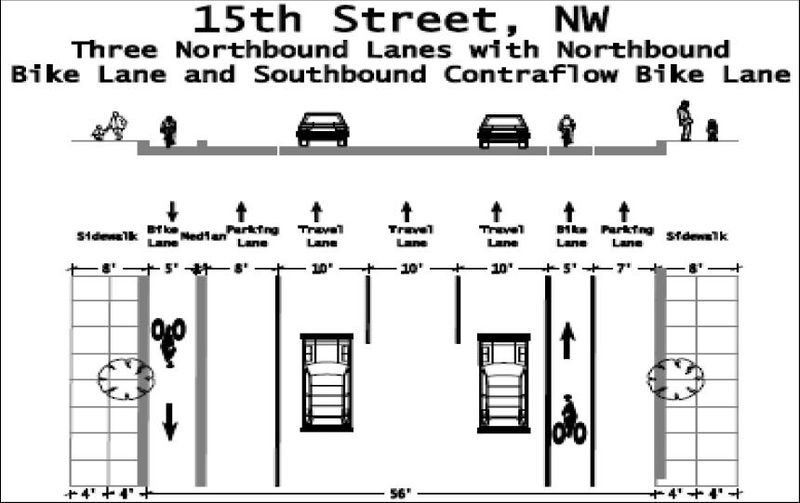 Starting Monday, Oct. 26, DDOT will install the south-bound bicycle lane on the west side of 15th Street NW between U Street and Massachusetts Avenue. It will be between the sidewalk-curb and parked cars. (Image: DDOT courtesy of TheWashCycle.com Web site.)

We were just talking about this… we had been wondering if/when the city was going to install the south-bound bicycle lane on the west side of 15th Street NW (which is one-way north-bound). This morning there was a message in the Logan Circle News group on Yahoo! Groups (below).

DC Department of Transportation (DDoT) will begin work on the bike lane–which will run from U Street to Massachusetts Avenue NW–this MONDAY, October 26, and be completed the following Monday. DDoT is distributing a flyer to 15th Street residents today.

About the Bike Lanes

For those of you not in-the-know, there was discussion (a lot of it) on whether to turn 15th Street north of Massachusetts Avenue into a two-way street (I personally would have preferred it, many neighbors did not and opinions varied). DDoT kicked around several different configurations for 15th Street and finally decided to implement Alternative 5.

ANC 2B/Dupont Circle is one of the largest in the city, with nine single-member districts. (Map: ANC 2B Web site.)

Well, if you plan to attend an ANC 2B/Dupont Circle meeting this year, I would pick the one next Wednesday. On the March 11 agenda are two notable items:

The full agenda is below. Remember that West Borderstan is part of Advisory Neighborhood Commission (ANC) 2B/Dupont Circle, while East Borderstan is in ANC 2F/Logan Circle. The meeting starts at 7 p.m. at the Jewish Community Center at 16th and Q NW.

END_OF_DOCUMENT_TOKEN_TO_BE_REPLACED

Borderstanians: I learned today that the city has decided on a traffic reconfiguration plan for 15th Street NW. It will have two-way bicycle lanes, but keep three northbound lanes of traffic (see “Reconfiguration of 15th St. NW: What We’re Getting.”)

On Jan. 31, I posted a poll here at Borderstan.com, asking readers, “Should 15th St. NW be a 2-way traffic street?” Below are the results (as of Feb. 19) of this extremely unscientific and unreliable public opinion poll. Remember that anyone can/did offer their opinion, regardless of where they live.