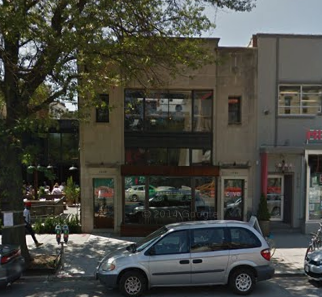 (Updated at 3:20 p.m.) A masked man was arrested last night while waving a knife and threatening patrons at popular 14th Street NW bar and restaurant Barcelona.

Police say Akintola Olowofoyeku was arrested around 12:41 a.m. this morning after he entered the eatery wearing a ski mask and holding a knife. It was unclear whether Olowofoyeku was attempting to rob patrons or the restaurant itself, say police.

Erick Sanchez says he was dining with friends at the restaurant after 11 p.m. when the masked man started pounding on the windows.

“This guy creeped up by the window in a ski mask and banged on the glass,” Sanchez says. “Our waitress started running toward the back and then the guy bolted in.”

Sanchez says the man then pulled out a knife and darted toward the bar and cash registers, but was apprehended by a bartender.

“He pulled out a knife when a bartender came from behind him and knocked him out [with a] clean blow the head,” says Sanchez.

Police say that two people held the alleged robber down while they waited for officers to arrive.

“It was definitely scary and a good amount of folks just fled the place,” Sanchez says.

Alex Curley, Barcelona’s area director, says the bartender who punched the would-be robber would rather not comment on what happened.

Though Curley didn’t witness the incident, he said he reviewed camera footage and spoke with employees who were there to get a sense of what happened.

“It was crazy,” Curely says. “We’ve never seen anything like this happen before. This is an awesome neighborhood, so it was like, what the hell is this?”

Some people are already calling the bartender a hero, Curley says.

“He acted on complete instinct. He saw that people were in danger, he saw that something was wrong, and he acted on his own personal instinct,” says Curley. “In that light … he is a hero. We averted what could have been bad.”

This afternoon, Sanchez started a “Give the Hero at Barcelona a Tip” IndieGoGo page to collect money for the bartender.

“I hope we can give him a nice little token of our appreciation,” Sanchez says.

“We chose DC because it is such an eclectic environment,” said Ria Rueda, director of marketing for Barteca Restaurant Group. “Restaurants in Washington are serving all different types of foods.”

The restaurant planned for 1622 14th Street NW, which has no set opening date or even approximation, will focus on the traditional cuisine of Spain.

“The focus will very much be on charcuterie, tapas, etc.,” said Rueda. “It will have an excellent wine program and excellent food.”

While Rueda did not have any specific details to share on the menu and wine list for the DC location, she did say that the format of the menu will be similar to Barcelona’s other locations. However, Rueda assured us that Barcelona is “not cookie cutter,” so not everything will be the same.

Other locations for Barcelona serve lunch, brunch and dinner, with a strong focus on dinner. Menu options include a variety of Spanish meats and cheeses, tapas (ranging from Kale Salad to Yellowtail Crudo, Sweetbreads a la Plancha and Spiced Beef Empanadas), paella and mixed-grill items for the table.

Plans for the 14th Street location are still in development, so information on design and space layout is not available. However, Borderstan has seen some action at the site, with a small crane and some cleaning up of the site.

“We’d rather be methodical and take our time to explore every detail,” said Rueda, who also told Borderstan that Barcelona does not have plans reach out to the press when they have a better idea of an opening date. “We’d much rather roll out slowly than stick to a hard date,” she said.

So until the mysterious opening day, we’ll be pacing outside.