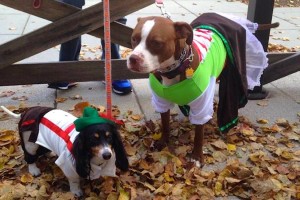 Lederhosen, dogs, German food and beer — lots and lots of beer — will abound at an annual celebration in Dupont Circle this weekend.

Glen’s Garden Market (2001 S St. NW) will host its second annual “Dogtoberfest” this Saturday from 3-7 p.m. The event was originally scheduled for last weekend, but uncertainty about the weather pushed it back.

Flying Dog Brewery is the market’s partner for the event and will bring three seasonal brews as well as collars and treats for the dogs.

The menu includes sweet and sour cabbage, cheddar bacon bratwurst and apple strudel. The market’s regular food service will also continue, but dogs are not allowed inside the store.

Patrons will use tickets to purchase food and beverages at Dogtoberfest. Tickets are sold on site and cost $2 each. Beers and food will cost two tickets, while larger plates will cost three.

“We are super excited about the weather forecast this weekend,” Glen’s Garden Market catering director Shana Muhammad said. “We’re hoping people will come by with a great attitude and ready to have fun.”

From Scott Leibowitz. Find Scott on Twitter @Lebodome, email him at [email protected].

Whether you think the city made a good or bad decision giving Living Social massive tax incentives to put their headquarters in our fair city is irrelevant. What is important is that this company keeps giving back to the city by bringing wonderful weekend beer tastings to the Bullpen next to Nationals Park.

Fellow writer, Lauren, and I had the pleasure of covering this event last year, and I can say hands down Living Social has figured this thing out and this year’s execution was spot on.

Thanks to gorgeous weather all weekend, the city’s underpaid 20 to 35-year-old’s enjoyed a wide range of ales, brews, and ciders from all over the world in the form of a small plastic cup. I myself was able to enjoy Smuttynose IPA, Lost Rhino pilsner, Duvel, Ommegang Hennepin, Angry Orchard, and Shocktop Summer. From that list, my top choices would have to be the Ommegang and the Lost Rhino as both had a great taste and weren’t too heavy.

Another great feature of this unlimited beer tasting is that some of the city’s finest food trucks are there (I wonder if heavy drinking leads to hunger?). Those steak tacos I had from Surfside hit the spot while listening to the fantastic cover band Kristen and the Noise sing classics like “What’s my age again” and “Forget You.”

Overall, this is just a great event. Only thing I’d say for next year is, if you want to go, go the second day as most of the crowd goes Saturday. It’s just easier to move around and drink on Sunday. Most Living Social emails are probably worth deleting, but next time you get that one that says beerfest, forward to your friends and get a game plan going. You won’t regret it.

When I attended GWU, I had the privilege of studying abroad one semester in a small town in southwest Germany called Freiburg. While I was able to enjoy many of the fun and interesting parts of German culture, due to scheduling and other circumstances, I was unable to attend what is high on my short list of world events I’d like to attend once in my life (World Cup, Wimbledon, Summer Olympics).

Sadly, I did not make it to Munich for Oktoberfest, a 16 day beer drinking festival. One day I hope to strap on some leiderhosen and attend this incredible event, but in the mean time I must settle for what’s in my backyard, and in DC last Saturday, LivingSocial hosted a craft beer and food truck festival at the Half Street Fairgrounds next to Nats Park.

I attended this beerfest with my girlfriend and had strong expectations for a fairly fun scene of debauchery and live music from a band I didn’t even think was real. What we experienced in the pregame area (the Bullpen) next to Nats Park was a large percentage of the city’s Yuppies mixed with patience and a dress code all over the spectrum. Here is what you missed:

Overall it was a fine Saturday afternoon in Navy Yard. If it comes back, I am bringing a bag of pretzels and my own mug.

The Nats are IN THE PLAYOFFS. Go buy a W hat already — there’s plenty of room on the Nats bandwagon. Playoffs begin next week; the matchup is to be determined, but, man, the Nats are lookin’ good!