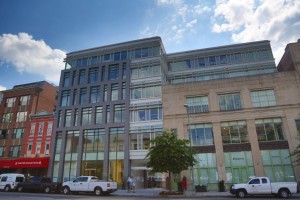 Cyclists will soon have a new place to park their bikes on 14th Street NW.

A District Department of Transportation (DDOT) spokesperson confirmed the department will install two new two-bicycle racks in front of the Whitman-Walker Health Center at 1525 14th Street NW “within a few weeks, permits pending.”

Yellow markers indicating where the bike racks will be installed were stenciled onto the sidewalk in front of the health center last week, noted one Twitter user.

“There’s about a hundred staff who work in the building, and at least a handful ride their bikes to work,” Jain says. “We also have some patients who’d want to be biking to the health center. We wanted to make sure there was a place for them to park their bikes.”

“Having bike racks in front of our health center fits in with the community health and wellness we want to promote,” Jain added. “Obviously, biking is a great physical activity, both for our patients and our employees.”