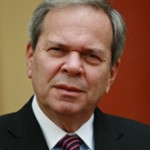 Mike Silverstein is an ANC 2B commissioner, an Alcoholic Beverage Control board member and a former journalist.

Last week, he wrote to us and shared a touching story about a series of events that occurred exactly ten years ago today. We thought the story, a tale about the rescue of a dog during the aftermath of Hurricane Katrina, was best told in the commissioner’s own words.

I found these items among my souvenirs — keepsakes of a story that happened ten years ago this week. It’s a story how three people from DC somehow joined together to save the life of a dog in New Orleans.

Hurricane Katrina had destroyed parts of the Gulf Coast more than a week earlier, and much of New Orleans was still under water.

I was at work at ABC News on DeSales Street when I got a call from my good friend Emmett Woolfrey, who had moved from D.C. to New Orleans several years earlier. Emmett had safely evacuated to Baton Rouge. He called to ask if there was any way to help his friend, a fellow hospital technician names James Coates. James had been forced to leave his dog Chanelle behind, with a maybe a week’s worth of food and some bowls full of water. James was terrified that the water was running out, and Chanelle would die of dehydration.

I had seen a story about animal rescues (this was twelve days after the storm hit), and tried to contact the group that was coordinating those efforts. I was unable to reach the woman in charge by phone, so I sent her an e-mail. It was, in retrospect, a bit melodramatic, but I wanted to get her attention. 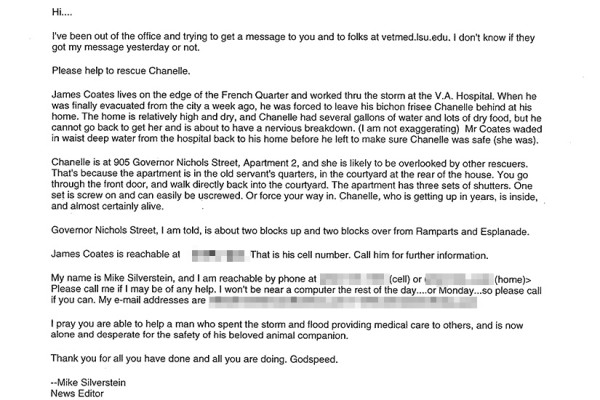 I never did hear from Ellen, but the results were even better. The next day, I got a phone call from a neighbor. It was Scotlund Haisley, from Georgetown, whom I knew both from Montrose Park and from the Washington Animal Rescue League. He said he was calling from New Orleans, from a boat, headed down a flooded street, and on his way to try to find Chanelle. He was asking for specific instructions on how to find James’ apartment. Fortunately, I had met James at Mardi Gras 2002, and had stopped by his apartment before one of the parades, so I could describe the house and the path back to James’ apartment. The directions were all that Scotlund needed. He said he’d get back to me after he found Chanelle.

An hour later, he called back, and said he had found her and she was in bad shape. She was near death from dehydration, and was unconscious and barely breathing. He said he was taking her to a hospital unit to get an IV into her. Later, he had her taken up to LSU in Baton Rouge, where veterinary doctors stabilized her, and put her on the road to recovery. Scotlund, meanwhile, went back to searching abandoned and ruined homes for animals to be rescued. 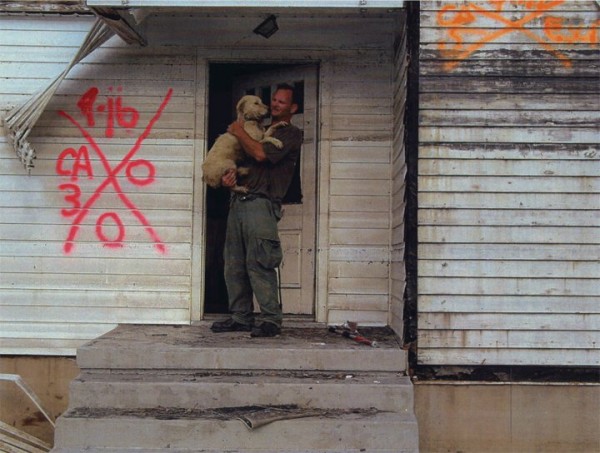 Scotlund called me about a week later, and told me Chanelle was well enough to be reunited with James. Eventually, James and Chanelle returned to New Orleans, and he sent me this picture, which speaks for itself. 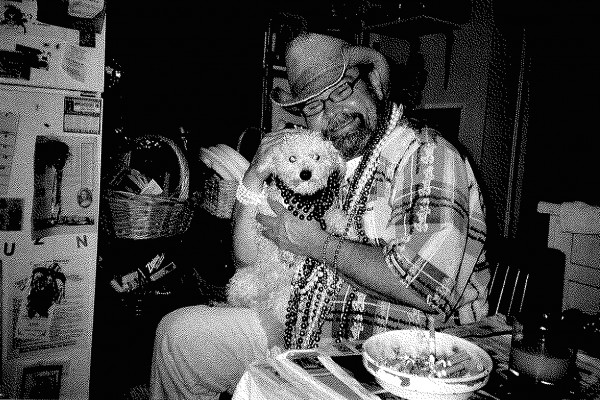 Chanelle lived to be 14 years old, and was James’ best friend and faithful companion. Her tongue was always too big for her mouth, and it always stuck out, especially when she was happy. Sadly, James died last year. Emmett now lives in Florida. And Scotund, who left the Animal Rescue League to work with the Humane Society, now works with the Animal Rescue Corps, a group that rescues animals after natural disasters and from abusive situations.

Very few good things came out of Katrina, but one was a change in the way animals are treated in disaster evacuations. We are no longer forced to choose either to stay behind with our pets or to evacuate and leave our animal companions behind. Our dogs and cats are members of our families. They can come with us, and their love and loyalty can help see us through whatever storms we must endure.

It’s a lesson I learned ten years ago this week, a lesson with a happy ending.

Photos courtesy of Mike Silverstein and ANC 2B 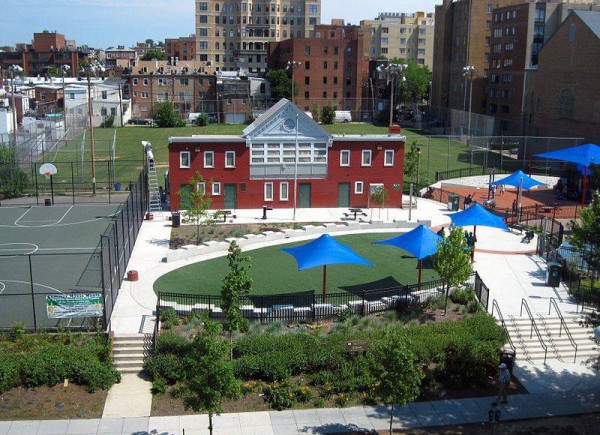 Kishan Putta is a former ANC Commissioner and current Vice President of Friends of Stead Park. He can be reached at [email protected] and @kishanputta on Twitter.

If you haven’t been to Stead Park yet, this fall will be great time to visit.

Until last fall, Stead was mostly known for its nice, but crowded playground at 1625 P Street NW. But the playing field was little-known and little-used by the local community; partly because it was hidden by buildings on P Street, 17th Street and 16th Street NW; the tall, prison-like fence and gate that was not reliably unlocked by citywide park rangers; and partly because the field itself was noteworthy only for its bumpy, patchy and barren condition.

All that changed last year when Friends of Stead Park (FOSP) and residents successfully advocated for a field revitalization that includes a jogging track, a spray park, a performance stage, soft turf with water-retention, trees and flowers and entrances from 17th street and 16th Street for the first time ever.

But many still walk by without having ventured in to see this new community treasure. FOSP hopes that will change this fall with a great lineup of events for all ages.

Their first fall event is a musical movie night on Saturday Sept. 19 at 7:00pm.

“Grease” will be screened and will feature singalongs and prizes for the best 1950s outfits.

A second, likely animated film is planned for Saturday, Oct. 3.

For the first time, FOSP will be hosting the parade’s after party at Stead Park on the new playing field with a concert, dance performance, games, and of course sweetstuff!

The fun will start at Logan Circle. Cheering on the long parade of cute costumes is popular with all ages. Many businesses and restaurants along P street get into it, so, even if you don’t have children, you can get a spot or a restaurant seat early and cheer the kids on as they strut by. It’s also fun to volunteer for a bit. It’s a blast for everyone.

According to the parade organizers, Joelle Myers and Evelyn Boyd Simmons, the parade has evolved with the neighborhood and entertainment will be fun for all, but targets kids up to 12 years old.

Following the parade, the last event before the cold sets in will be a fall festival on November 14.

Once it’s cold outside, Friends of Stead Park will be partnering with businesses and organizations such as Whole Foods on P Street and the Foundry United Methodist Church to hold events for children at their venues rather than at Stead’s old brick recreation center building. Currently, the park cannot meet the demand for FOSPs popular indoor programs, but a recreation center is actually one of FOSP’s top priorities for the future of the park.

Last year, we asked the city to open a cooperative daycare program at Stead. But they determined that the rec center was not safe enough for toddlers to use for this purpose.

Clearly the recreation center needs to be modernized. But, with so many families moving to the area — and staying here — this is a good opportunity to expand the public indoor space available to the community. If you would like to help us work toward this goal, please contact us.

Photo via Friends of Stead Park 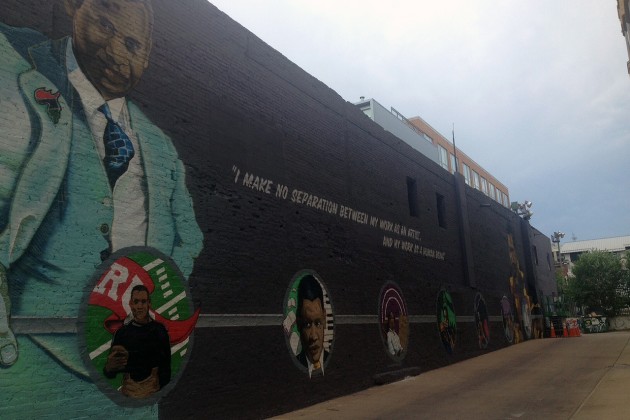 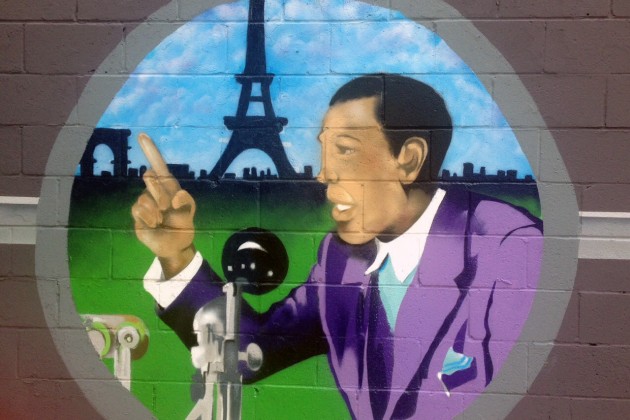 Have a great Thanksgiving Day from Borderstan.

At Borderstan we are thankful for many things. For example, we have had a great year covering the day-to-day of our community. We live in a diverse growing neighborhood where we can shop, enjoy restaurants and bars, galleries, theaters, great parks, sports and schools, all within walking distance.

Rachel is thankful for

Scott is thankful for

Scott is not thankful for

Michael is thankful for

Michael is not thankful for

Leslie is thankful for

Danny is thankful for

Danny is not thankful for

Chelsea is thankful for

Chelsea is not thankful for

Dafna is thankful for

Dafna is not thankful for

Nick is thankful for

Cecile is thankful for

Kim is thankful for

Kim is not thankful for

Luis is thankful for

Luis is not thankful for

Matt is thankful for

Matt is not thankful for

Aparna is thankful for

Aparna is not thankful for

Alejandra is thankful for