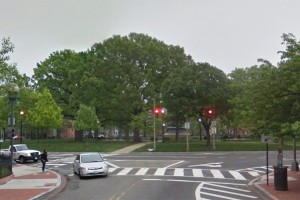 A group of four teenagers violently robbed a boy near Logan Circle yesterday.

The boy, who is in his early teens, was walking on R Street NW around 5:30 p.m. when one of the suspects approached him. The boy said, “Excuse me,” and then the suspect tackled him and attempted to rob him, police said.

The three other suspects then joined the attacker when the victim fled toward Logan Circle, authorities said.

The group caught up with the boy on the 1300 block of P Street NW. They then circled him, emptied his pockets and stole his property, police said.

Officers patrolled the area, found all four suspects and arrested them in connection with the robbery.

Total crime (both violent and property crimes) for the  month of July 2009 in the Borderstan crime area¹ was down when compared to July 2008. There were, though, more crimes in July 2009 than in July 2007 due to a higher number of property crimes. We provide you with historical numbers in order to get some sense of the direction of the crime rate in the neighborhood. It is possible to obtain crime statistics from the DC MPD online crime database for up to two years.

Note: For a look at how July 2009 crime compares to May and June 2009, read  “Borderstan: Violent Crime Up Slightly in July After June Dip.”