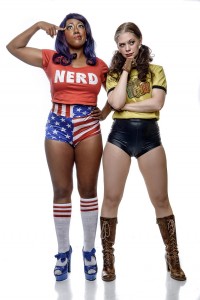 Cherie Sweetbottom, one of the event’s producers as well as one of its performers, said the women in the show would be doing routines in the style of Buffy the Vampire Slayer, Dollhouse, Cabin in the Woods, The Avengers, Marvel’s Agents of S.H.I.E.L.D., Firefly and Serenity and Dr. Horrible’s Sing-Along Blog.

“We have a duet, a couple of group numbers, a fantastic local musician, and a costume contest,” says Sweetbottom. “And we have a finale group number with live singing, live music, and a big finish.”

Sweetbottom adds that Whedom himself was also invited to the big night.

“We always put Joss on the guest list,” she says, “but I don’t think we’d want to know he was coming. It would be better to find out afterward that he’d been lurking in the back somewhere, possibly in a disguise to hide his identity from the worshipful fans.”

Those planning to go are encouraged to buy their tickets ahead of time, as the show usually sells out.