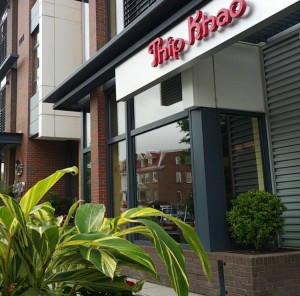 “We’re going to clean up and change a little bit of the interior,” Caminos says. “Nothing design-wise, just to make it feel a little roomier.”

Part of the reason the restaurant needs some touching up, says Caminos, has been its recent popularity. Earlier this month, the eatery was named among the Top 50 restaurants in the U.S. by Bon Appetit. Since then, Caminos says consistently huge crowds of diners have left the dining room with minor scrapes, bumps and dents.

“A lot of it comes down to touching up the paint job,” he adds.

Chef Seng Luangrath will use her time off to experiment and brainstorm ideas for a new fall menu, says Caminos.

“We’ll be experimenting with some new menu items, some new cocktail items,” he says. “But the core of the menu will still be there. Lao food is Lao food.”

And Caminos says there will be one change that customers likely can’t see: Luangrath’s son, Bobby Pradachith, will serve as the restaurant’s general manager when it reopens.