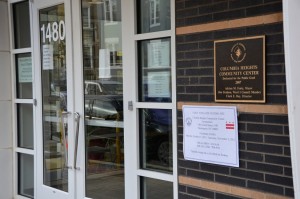 A new proposal from D.C. Mayor Muriel Bowser to help fight crime in the District would make the Columbia Heights Community Center a little brighter, reported HillNow this afternoon.

The community center, located at 1480 Girard St. NW, would receive additional lighting if the D.C. Council approves Bowser’s fiscal 2015 supplemental budget, which she released yesterday. The budget calls for $1.1 million to install additional lights at that center as well as at seven other recreation centers across the city.

The lighting “will ensure that these centers remain a safe place for residents to congregate” in neighborhoods with “heightened crime,” according to a summary of the plan.

The center was briefly locked down in July when two men shot at one another near the Girard Street Park playground.

D.C. Police have released a surveillance video of what appears to be the aftermath of a daylight shootout that cleared the Girard Street Park playground and temporarily locked down the Columbia Heights Community Center.

In the video, a man can be seen darting past a swing set and a group of fleeing children.

Police say that two men shot at one another in a crowded playground on July 7 around 11:29 a.m.

Nobody was hurt in the shootout, but police say several bullets struck property throughout the area.

“In the long term, I am working to ensure MPD has the resources they need to prevent these kinds of incidents, while applying constant pressure on MPD so that they leave no stone unturned in their efforts to keep Ward 1 safe,” Nadeau said in a July 7 statement.

(Updated at 5:11 p.m.) The Columbia Heights Community Center (1480 Girard Street NW) was temporarily closed earlier today due to reports of possible gunshots nearby at the intersection of 15th and Girard streets NW.

D.C. Parks and Recreation spokesperson Brian Armstead confirmed around 12:44 p.m. the building was locked down due to police activity in the area.

The building was reopened by 2:30 p.m., but summer camp was cancelled for the remainder of the day, said Armstead.

D.C. Police said the lockdown was likely procedural, and have not yet confirmed a gun was fired in the area.

“I can only imagine how upsetting this was for your families,” she wrote.

“As weather gets nice over the summer we’ve noticed an uptick in these incidents and are working closely with MPD to address them” Nadeau added.

“There is nothing I can say to make you feel better about what happened today, I’m sure,” continued Nadeau. “But I want you to know I’m taking it very seriously, as is DPR and MPD.”