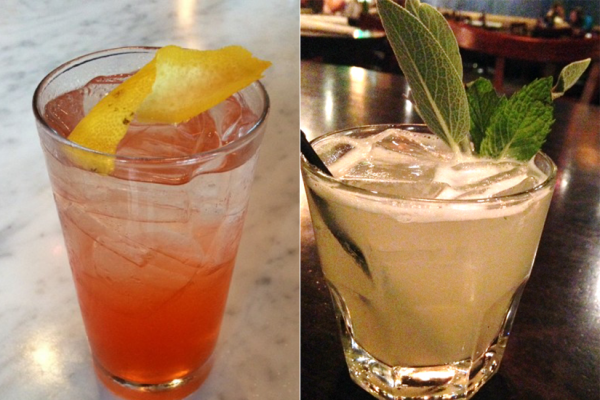 P Street hangouts and EatWellDC restaurants Commissary and Logan Tavern will each sell a Pride-themed cocktail this weekend.

Commissary’s Shut Up and Dance cocktail, a blend of pineapple-infused vodka, sage, mint, ginger, and lime will be sold all weekend for $8. Seven-drink pitchers of the cocktail will also be available for $48.

Logan Tavern will be serving a drink called the Stonewall Strawberry, an amalgam of strawberry infused vodka, mint, simple syrup, St. Germaine and soda. That cocktail will only be available on Saturday from 11 a.m. to midnight.

Both Logan Tavern and Commissary are located along this year’s Pride Parade route.

Next week we will have a roundup of Cinco de Mayo hotspots in the neighborhood. (Luis Gomez Photos)

From Matty Rhoades. Email him at matty[AT]borderstan.com.

We knew Cinco de Mayo was becoming a serious DC celebration when we got an early notice from a local eatery regarding their plans for the 5th of May (Commissary and sister restaurant The Heights have planned special menus, are even taking reservations, and Commissary has lined up Latin guitarist Ricardo Marlow, from 5 to 7:30 pm.)

BTW, not worry, we’ll have a wrap up for you next week on what local venues are planning for 2012 Cinco de Mayo. But before you start planning your festivities (fortunately the holiday falls on a Saturday this year), and contemplating shots of tequila, let’s take a minute to clear up some common misconceptions about Cinco de Mayo.

No, It’s Not Mexico’s Independence Day

First, Cinco de Mayo is not Mexico’s Independence Day.  In 1861, the French invaded Mexico to force repayment of debts. The 5th of May, 1862, commemorates the Mexican army’s unexpected victoryover French forces at the Battle of Puebla. However, even with the Mexican victory at the Battle of Puebla, the French were able to gain control of the country. French Emperor Napoleon III installed Maximilian I (an Austrian) as emperor of Mexico, which lasted until 1867 when the French Army was finally driven from the country.

See? We told you that Cinco de Mayo is something much different than what you probably assumed.

Grito de Dolores (“Cry of Dolores”) on September 16 is recognized in Mexico as Independence Day — on that day in 1810 the war for independence from Spain began. The day is also known as  El Grito de la Independencia (“Cry of Independence”) or El Dieciseis de septiembre.

So, what do Mexican-Americans think of Cinco de Mayo? Is it as important as the U.S. festivities might lead one to believe?

Borderstan Food Editor Alejandra Owens grew up in Arizona and her mother is Mexican-American. “While I’m hesitant to speak for a whole culture, I think you’d be hard pressed to find any Mexican-Americans that take the holiday seriously,” said Owens.

When asked if Americans understood Cinco de Mayo, Owens replied: “I think Americans are clueless about the holiday. Most would probably say it’s ‘Mexican Independence Day,’ but it’s not. It’s like St. Patrick’s Day — people just view it as a fun excuse to party. And maybe don some racially insensitive hats.” She added, “In Arizona, we were more likely to celebrate Rodeo Week.”

Local real estate agent Fernando Garcia was born in Texas and lived for a few years in Mexico with his family before moving back to Texas. “In our family, The Day of The Dead [Día de los Muertos] was celebrated and recognized more than Cinco de Mayo. We did celebrate El Dieciseis de Septiembre every year with fireworks and parties — not Cinco de Mayo,” said Garcia.

So, has Cinco de Mayo become “gringoized,” so to speak? “Very. This is very ‘Corporate America.’ Anything to make a buck and commercialize a holiday for profits,” said Garcia.

Danny Hernandez lives grew up in Texas and now lives in D.C. “When talking to my grandmother about Cinco de Mayo celebrations in Mexico, she said entire towns have events similar to a county fair. There are games, food, carnival attractions, dancing, a rodeo, a parade, and they elect a queen. It’s an all day celebration, but not something she found when she moved to the states, hence I didn’t grow up celebrating it in Texas,” said Hernandez.

How does Hernandez view the American version of the 5th of May? “When I moved to D.C. two years ago I was surprised at how many bars and restaraunts had Cinco de Mayo specials and events, despite the very small Mexican population here. My first Cinco de Mayo in the city, I texted the few Mexicans I knew, to ask how they would be celebrating. None of them had plans, even though many of my non-Mexican friends were going out,” said Hernandez.

Whatever your views about Cinco de Mayo — and how well you understand it — it’s a great day to have fun and remember that it signifies something important in Mexican history.

Give Well is seeking applications from local charities and organizations for future benefit events. (Image courtesy Give Well DC)

GiveWell DC is seeking community organizations and charities as potential beneficiaries for future Dine Out events. The quarterly fundraisers, hosted at EatWell’s four local restaurants, give 10% of the dinner proceeds on a given night to a selected charity or organization.

GiveWell DC is the charitable arm of EatWell DC, which is the parent company of three restaurants in the Dupont/Logan area: Commissary, Logan Tavern and Grillfish, plus The Heights in Columbia Heights. A fifth restaurant, The Pig, will open on 14th Street NW in Logan Circle in the spring.

According to Andy Phan of EatWell DC, “GiveWell DC chooses beneficiary partners based on two main criteria: a connection with our neighborhoods and guests, and a desire and ability to participate in the promotion of the event. GiveWell DC welcomes all interested neighborhood and charitable organizations to submit letters of interest for all future Dine Out Nights.”

An estimated $10,000 has been raised for local organizations since the Dine Out nights began a year ago. Past participating charities have been The Myositis Association, The Trevor Project, Food & Friends as well as Iraq and Afghanistan Veterans of America. The next event is scheduled for this December.

“There is no limit on how much a selected organization can receive, so the key to success for the partner charity is to actively participate by getting their network to dine in the restaurants on the selected evening, help promote the event and have ambassadors at the restaurants on the night of the event to inform the diners of the organizations’ cause and solicit additional donations,” explained Phan.

If you are a local charity or organization interested in becoming part of EatWell DC’s Dine Out Nights, contact Phan at [email protected].

From Alejandra Owens at One Bite At A Time

Dining out for a cause isn’t exactly a new thing ’round these parts, but sometimes the cause, the deal and the restaurant involved come together in a perfect storm that’s both tasty and inspirational.

Tonight only (January 31) if you dine at Commissary, Logan Tavern, or The Heights, 10% of all proceeds will benefit the “It Gets Better Project.” All three restaurants are owned by the EatWell group which runs a charitable division called GiveWell.

To RSVP to the event via Facebook, donate to It Gets Better Project, share your story or watch the infamous videos visit this site.

Here are some suggestions of things to do during the weekend in Borderstan, really close by or in the city. Remember that Arts on Foot is this Saturday in Penn Quarter (7th & F NW) and that it is Adams Morgan Day on Sunday.

Commissary, located at 1443 P Street NW, has become a great neighborhood restaurant with excellent prices. Inside it has a wonderful casual atmosphere and is a perfect place for any occasion. Commissary offers an incredible brunch during the weekends. The outdoor patio facing P Street NW is always a good spot to watch people during the summertime.

La Frontera Cantina at 1633 17th Street NW is your basic Tex-Mex restaurant with all your favorites. It will never disappoint you unless you are looking for a real Mexican flavor. It has had very mixed reviews; some people consider it wonderful, others quite poor.

Cafe Salsa Grill at 1712 14th Street NW is a new addition to the neighborhood and is always a good bet. Their food is inventive and keeps its Latin roots. We have eaten there twice: once for dinner and it was great; and recently for breakfast with an even better.

END_OF_DOCUMENT_TOKEN_TO_BE_REPLACED

A statue of Civil War General John A. Logan graces Logan Circle NW. He was later an Illinois governor and U.S. senator.

The Logan Circle Citizens Association (LCCA) has announced a series of happy hours/ receptions at local restaurants. The first one is February 19 at Commissary at 1443 P Street NW.

From Logan Circle News (you can sign up for the listserv):

LCCA will host monthly neighborhood happy hours/receptions at neighborhood restaurants and businesses.  We are hopeful that these events will provide an informal way for residents to connect with each other, and with businesses in their neighborhood.  Here are the details:

END_OF_DOCUMENT_TOKEN_TO_BE_REPLACED

Those of you–like us–who have mourned the passing of neighborhood Latin American fusion eatery Merkado (and their blueberry mojitos) will soon have reason to perk up, or at least a reason to stop by the place. “Commissary” will be opening its doors next Tuesday, September 9 (although a “soft opening” before then wouldn’t surprise).