(Correction: The victim was a woman, not a man as previously reported; Updated at 5:49 p.m.)

A woman was shot in the arm after an argument that occurred on the 1200 block of Connecticut Avenue NW around 10:28 p.m. yesterday evening, said D.C. Police Lieutenant Jerome Merrill.

Though information regarding the shooting was sparse late last night, Merrill provided more details on the Second District listserv this afternoon:

“There was a argument between the suspect and the victim,” Merrill said.

“The victim and suspect know each other,” he added. “The suspect shot the victim in the arm. This appears to be a isolated incident and there is no threat to the public at this time.” 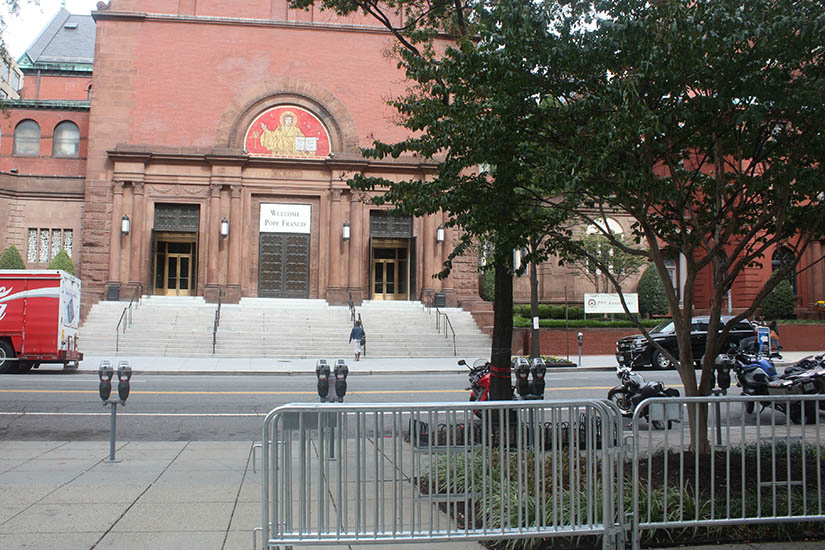 Several business near St. Matthew’s Cathedral are bracing for arrival of Pope Francis.

The pope will bring his entourage of road closures, beefed-up security and onlookers to the Dupont Circle area tomorrow morning as he visits with bishops at the Cathedral of St. Matthew the Apostle. The owners of several businesses that share the 1700 block of Rhode Island Avenue NW with the church are preparing for street closures and large crowds, but few are planning to close for the day.

At Jack’s Fresh, a restaurant across the street from the cathedral, owner Susan Yin said that she plans to stay open tomorrow. Yin added that several customers have asked, noting that that eatery’s windows directly face the front steps of the cathedral.

“I was surprised no police came to check security yet,” Yin said. “But I hope the pope can find time to come over here to enjoy lunch.”

The owner of Marbi’s News Stand, which is next door to Jack’s Fresh, said he doesn’t expect customers to be able to reach his store from Rhode Island Avenue, but said his entrance within the OFC building will remain open.

On the other side of the OFC building, on M Street, businesses aren’t dealing with as many physical barriers, but are still bracing for crowds and traffic problems.

The owners of Suki Asia restaurant say that they will prepare boxed lunches ahead of time so they can better serve the expected crowds of pope-watchers.

Across M Street, employees at Avis car rental say their storefront will remain open, but because there will be so many road closures in the area, they’re encouraging customers to go to their other locations at Union Station and National Airport.

Mike Caruso, vice president of Caruso Florist on M Street NW says he’s not sure what to expect tomorrow. He expects crowds in the area around the pope’s visit but with so many people in the area working from home, he thinks the area might be empty for much of the afternoon.

Caruso’s business provided several flower arrangements to the cathedral for their services, and he hopes that they help create a festive atmosphere in and outside of the church.

“A lot of people aren’t working so I think it’s going to be like a snow day most of the day. There will be people around the church, and I think it’ll get pretty festive.” 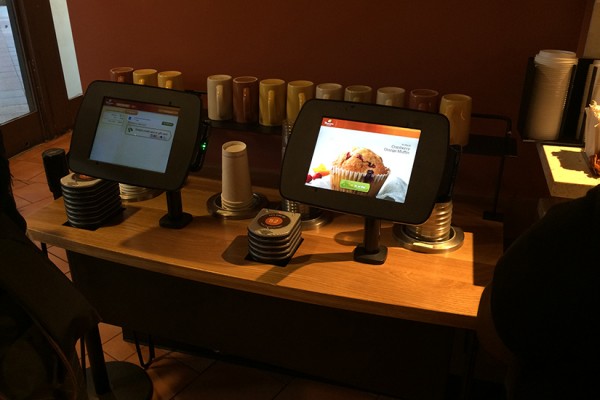 Human interaction is on the decline at a Dupont Circle Panera.

So far, the kiosks haven’t seemed to confuse the soup-and-sandwich shop’s clientele. Several customers were observed sleepily dragging their fingers across the ordering stations’ touchscreen monitors when Borderstan visited the store earlier this morning.

The new kiosks are in line with the national chain’s “Panera 2.0” effort launched last April.

But this isn’t a sign that Judgement Day is upon us. Customers can still order at cash registers manned by human employees, and Nicol said no cashiers made of flesh and blood were let go as a result of the installation.