I won’t attempt to explain… I will let dcist tell the story:

For a bigger picture, look at the January crime stats (detailed tables) for both PSA 307 and PSA 208.

END_OF_DOCUMENT_TOKEN_TO_BE_REPLACED

Good news, Borderstanians. It seems the stepped up police patrols are helping knock down crime, particularly in West Borderstan. Borderstan crime stats for August 2008 (with map) are below, with July numbers for comparison. First, a few observations:

July 2008 Crimes in Bordersan (click on map to enlarge) 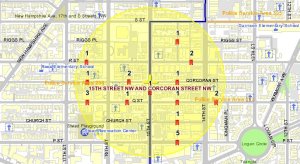 Borderstan Crime Statistics Report: 10-day period from August 5 through August 14. The second column is for the period in 2007 and the third column is for 2008. The final column shows the percentage change between 2007 and 2008. These stats are from the D.C. MPD Web site. The address used for the stats is 15th and Corcoran Streets NW (around 1620 15th Street), which is the geographic center of Borderstan.