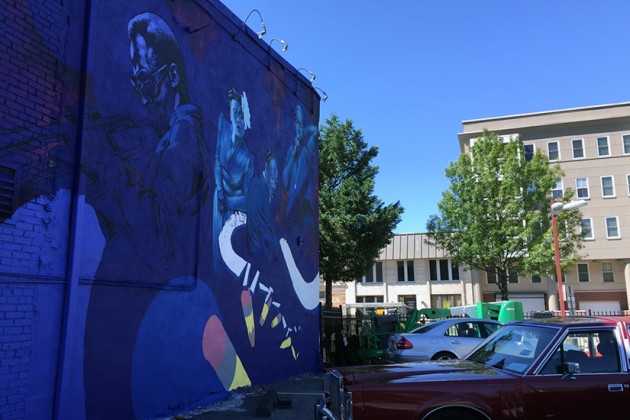 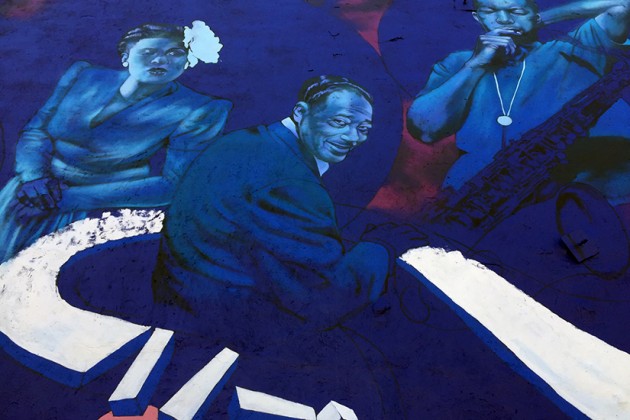 A building near the U Street Corridor is getting a mini makeover.

A new mural is being painted on the side of Bohemian Caverns (2001 11th St. NW) opposite U Street NW. The club says its old mural, which prominently depicted Miles Davis, was painted over on Wednesday.

Artist Aniekan Udofia is the man behind the mural. His artwork can be found on many walls across Northwest D.C. and include large-scale paintings in Shaw and Adams Morgan.

As of early Monday afternoon, the mural featured several musicians, many around a swirling, floating row of piano keys.

From Cecile Oreste of danceDC

Luis and I descended the stairs of Bohemian Caverns on U Street NW last Monday night not knowing what to expect. The music venue was cold and dark, but the space quickly warmed up with a full crowd of spectators and the music of the Bohemian Caverns Jazz Orchestra.

Learn about the incredible history of Bohemian Caverns, which first opened in 1926 then closed in 1968 and reopened 30 years later.

Directed by baritone saxophonist Brad Linde and trumpeter Joe Herrara, this 17-piece big band has been described as a “gem for the District” by the Washington City Paper. They perform every Monday from 8 to 11 pm at Bohemian Caverns at 11th and U NW.