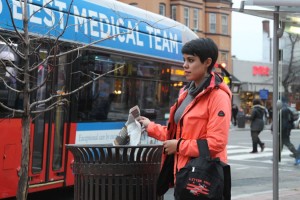 D.C. residents can ask members of the Department of Public Works and Metropolitan Police Department questions about keeping the District litter free from the comfort of their computers.

A live webcast will take place on the DPW’s website tomorrow from noon to 1 p.m.

Residents can submit questions to the DPW’s Interim Director Chris Shorter as well as a representative from the MPD’s Litter Enforcement team, as part of the DPW’s Litter Free D.C. campaign.

As the name implies, Litter Free D.C. is a program sponsored by the DPW that aims to eliminate litter from streets in the city.

“We’re always open for topic ideas and encourage residents to let us know what they would like to discuss,” Lyons said.

At about 11:50 pm, a victim was robbed at gunpoint in an alley near 18th Street and Florida Avenue NW by two suspects.

Shooting at 8th and N NW

At about 3:45 am on Sunday, April 21, MPD reported a shooting at 8th and N Streets NW. According to a post from police, an officer patrolling in the area heard the sound of gunshots and found a victim who had been shot in the lower leg. He was taken to the hospital for treatment. The suspect was described as a black male with a red shirt and was seen fleeing the scene on foot.

Earlier, on Saturday, police made an arrest in an attempted robbery near 14th and W Streets NW, according to a post. A suspect grabbed the victim around the neck and demanded money. He fled after the victim yelled for police and was apprehended a short time later by plainclothes officers. The suspect was arrested for assault with intent to rob.

Anyone with information in any of these cases is asked to call the Metropolitan Police Department at 202-727-9099.

DC Police Chief Cathy Lanier is the cover girl for Governing magazine for a story in which the publication highlights Lanier’s policing strategy. They say that many claim some  of her methods could change the District and the nation.

Lanier has made a name for herself on the national stage since being unexpectedly picked by former Mayor Adrian Fenty in 2005. By diverging from DC’s zero-tolerance crime policies, which were fashioned after New York’s hard-line crackdown on crime in the early 90’s, Lanier has eased tensions between high-crime neighborhoods and the police. This, Lanier says, is the key to winning the District’s long-term war on crime.

The article examines Lanier’s unusual path to the top, as well as how far the District and its police forces have come since she joined the force. There’s a good chance that if they haven’t already, Lanier’s policies will soon influence the national debate on crime. This makes her story one worth knowing.

Here are recent crimes of note in Police Service Areas (PSAs) 208, 307 and 305 for the October 17-23 period in the Dupont Circle, U Street and Logan Circle areas. Crimes of note are stolen autos, burglaries and violent crimes such as robberies and assaults.

This week, nothing but robberies to report–four of them with guns. END_OF_DOCUMENT_TOKEN_TO_BE_REPLACED

From the MPD Newsroom: 30th Annual Memorial Service for Officers Killed in the Line of Duty.

END_OF_DOCUMENT_TOKEN_TO_BE_REPLACED

Got this DC Police Alert yesterday evening. There was another gun robbery on 15th Street NW, near Meridan Hill Park. Very close to a similar robbery last Saturday evening at 15th and V NW at 7 p.m. This robbery–two guys with guns–occured at 7:20 p.m. on 15th between Belmont and Chapin Streets NW in Police Service Area (PSA) 304.

You can sign up online for DC Police Alerts.

Inspector Matthew Klein joined the Metropolitan Police Department in June 1989 and quickly rose through the ranks, achieving the rank of sergeant in 1993, lieutenant in 1994 and captain in 1997. In 2004, Klein was promoted to Inspector and placed in charge of the Internal Affairs Division. In that position, Inspector Klein oversaw all internal investigations for the department, to include serious uses of force, misconduct and corruption, and the agency’s compliance with the Memorandum of Agreement with the U.S. Department of Justice.

On Sunday, October 26, 2008, Klein was moved to the Second District as the acting commander.

Inspector Klein holds a Bachelor of Science degree in Criminal Justice from the University of Maryland and a Master’s degree in Public Policy from Princeton University’s Woodrow Wilson School of Public and International Affairs.

Find information about and from the D.C. MPD in the links section in the right-hand column.

Hey, Borderstanians, if you need information about or from the D.C. Metropolitan Police Department, check out the new links in the right-hand column here at Bordertan.com under DC Police Department.

The next Borderstan Neighbors public safety meeting is this Thursday, November 13, at 6:30 p.m. Location is the Fifteenth Street Presbyterian Church at the northeast corner of 15th and R Streets NW.

This is a follow up to the first Borderstan meeting on August 6 — meeting postings here and here. Ward 2 Council Member Jack Evans and representatives of the Washington MPD will atend, includng Assistant Chief Diane Groomes.

Remember that Borderstan is split between two MPD districts and two PSAs:

The community safety meeting held on Wednesday was a great success.

Mr. Evans, Asst. Chief Groomes, Jack Jacobson, and Charles Reed offered the opening remarks for the meeting, and Julie Pock, gave a brief background regarding the inception of Borderstan.

Asst. Chief Groomes discussed her personal history with our neighborhood. She had worked here as a Lieutenant here and spent a lot of time working with the community to clean up the area of drug traffickers and other criminals.Asst. Chief Groomes is aware of the challenges faced in Borderstan and knows that they can be overcome with the joint efforts of the community and MPD.

Lt. Miller patrols the 2nd MPD. He discussed his strong commitment to the Borderstan area.He mentioned that the second police district currently has 3 officers dedicated to patrol Borderstan, and that there is a proposed addition of 2 more officers to come.Lt. Miller indicated that he has asked to foot patrol officers responsible for the 17th Street corridor to expand this patrol to include 16th Street.Lt. Miller also discussed the creation of regular weekly meetings between Police Service Areas 208 and 307 for the purposes of exchanging information regarding activities and operations in the area.

Inspector Delgado, of the 3rd MPD indicated that there is ongoing undercover police activity, as well as the involvement of the Crime Suppression Unit, currently in place focusing on the drug activity around the 1400 block of R Street.

Both the Second and Third District police representatives indicated that they have used light towers in our area to successfully deter crime.

The floor was opened up to questions and concerns from the community. The majority of the discussion

<span revolved around the many issues facing the community – drug activity, thefts from automobiles, robberies, homeless issues such as public sleeping, urination, and drug use, and illegal parking.

Following the question from the community, a list of goals for the Borderstan Community was read , and it was requested that specific actions to be taken and commitments be made regarding these issues.