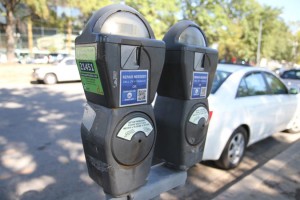 (Updated at 4:41 p.m.) People who park in Adams Morgan and on U Street will have to feed parking meters for two more hours, but not for a while, it seems.

Though the D.C. budget approved earlier this year called for parking meter enforcement in some areas of the city to occur from 7 a.m. to midnight, a new story by WTOP says the change in hours likely won’t take effect until next year.

When the changes do take effect, Adams Morgan and U Street will be among eight “premium demand zones,” that will have longer hours of parking enforcement and more costly meters than most other parts of the District.

The zones, which also include the National Mall, Georgetown and Penn Quarter, have meters that charge $2 per hour. Outside of the areas, meters charge 75 cents per hour and operate from 7 a.m. to 6:30 p.m.

The city’s Pay by Phone parking app started showing up all over the Borderstan area recent weeks. (Luis Gomez Photos)

By Michelle Lancaster. You can follow her and  tell her your news on Twitter @MichLancaster. Email her at [email protected]

As we all learned in Borderstan etiquette class, there are many drivers/parkers in our area. Presumably, you are occasionally forced to leave the hood and/or pay for parking in it. So you may find We Love DC‘s review of DDOT’s Parkmobile app, which will allow drivers to use their mobile phones to make payment to the meters. Early reviews? Plenty of room for improvement.