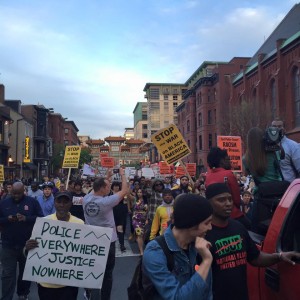 In a Facebook event page, the group said it was protesting “against racist, militarized policing in Washington, D.C. and across the nation.”

Dozens of protestors marched from in Mount Vernon Square Park to the Chinatown gate last night.

A press release from earlier this week says the protest was related to the now-infamous arrest in McKinney, Texas, in which a white officer pulled a gun on and shoved several black teenagers at a pool party.

The protest was also meant to coincide with the anniversary of the 1976 Soweto Uprising in South Africa, where hundreds of student protesters were gunned down and killed by apartheid police.

Read the full press release below:

Recent footage of an officer brutalizing and pulling a gun out on teenagers at a pool party in McKinney,Texas, have once again shed light on why Black Lives Matter protesters have referred to widespread police misconduct as “terror.” Widespread racially biased harassment, brutality and murder have all gotten plenty of media attention, but authorities have taken little action to end them.

On June 16, at 7:00pm, DCFerguson will be taking to the streets demanding an end to these practices.

Events like those in McKinney, Baltimore, Ferguson, Madison and elsewhere ring just as true in Washington, D.C. We have received reports of the militarized jump-out tactic being used by MPD to conduct unwarranted interrogations at gunpoint, seizures of money, and illegal searches, including public cavity searches. We have seen the video of Ralphael Briscoe gunned down in the back. We remember the execution of DeOnte Rawlings, shot in the back of the head by an off-duty D.C. police officer, who was later cleared of any criminal wrongdoing.

June 16 marks the anniversary of the Soweto Uprising in South Africa, where brave student protesters were shot down by police in what became a turning point in the struggle to bring down the brutal system of apartheid. We are in the midst of an uprising against pervasive, systemic racism right here in this country.

We want this summer to become a turning point where talk becomes action and injustice is confronted.

On June 16, we will gather at Mt. Vernon Square Park where we will rally then march through the streets of Washington D.C. to honor the freedom fighters that came before us and those who continue our fight today.