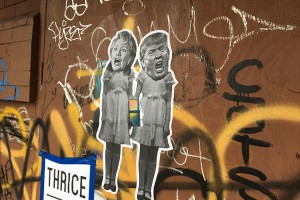 If you answered yes to both, here’s how and where to do that:

Cambria Hotel (899 O St. NW) will have the debate playing on TVs at its rooftop bar. Head there for a debate watch party from 6-10 p.m. with $4 domestic beers and $6 glasses of wine.

Ivy and Coney (1537 7th St. NW) will have an in-house commentator for the event.

Sudhouse’s (1340 U St. NW) happy hour is extended until 9 p.m. in honor of the verbal competition.

The Looking Glass Lounge (3634 Georgia Ave. NW) has half-price burgers from 5-8 p.m., followed by debate bingo for a chance to win a free drink.

The Wilson Building is home to the D.C. City Council. (Photo from D.C. Council Web site.)

Candidates for two At-Large seats on the D.C. City Council will debate this Monday, October 20, at the Dupont Circle Candidates’s Forum.

Two of the four At-Large seats are being filled this year. The other two seats, plus the Council Chairman slot, are up for election in 2010.

Click on the candidate’s name to go to his or her campaign Web site.

You can post questions for the debate online at ANC 2B/Dupont Circle–just click here to submit your questions.