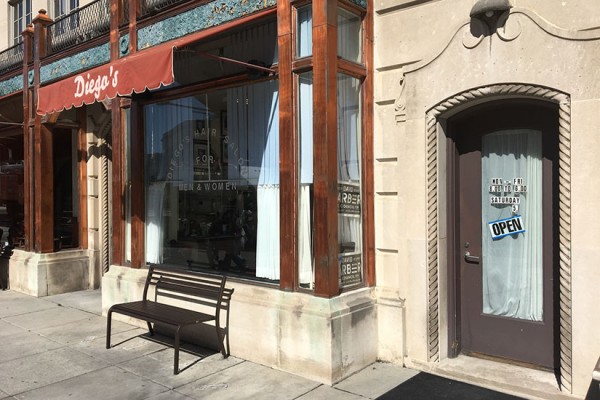 A Dupont Circle barber shop famous for charging Supreme Court justices, bigwig politicians and local celebrities just $20 for a haircut has been forced to raise its prices.

D’Ambrosio told Borderstan today that the shop had to charge more for a haircut due to an increase in its rent and other rising expenses.

“It’s not just the rent,” he said. “It’s the shampoo, the towel, the electric, everything.”

D’Ambrosio added that for 23 years, the business charged just $20 for a haircut.

From Mike Kohn. You can find Mike on twitter @mike_kohn or you can email him at mike[AT]borderstan.com.

When I was in college, I thought it would be a fun experiment to see how long my hair could grow, having had dreams of rocking a ponytail in my younger days. Combined with a European study abroad experience that only served to enable my questionable decision by showcasing how the Spaniards “pulled off” (in their eyes) the mullet look, I did succeed in growing my hair – though unfortunately, it grew out on both sides of my head, but not down in a way that actually made me look good.

My friends and family were generally unimpressed. Having looked back at pictures from that time in my life, I can see why: it was gross.

Luckily, I came to my senses and ultimately got my hair cut to a normal length and have proceeded to get it shorter and shorter in recent memory. The summer heat reaffirms that decision, reducing the already high level of sweat that comes with being outdoors in the District this time of year. To keep my hair length in check, I get a decent number of cuts. And talking with the rest of the Borderstan team, I found that our male contributors care just as much as I do about their coiffing habits, and have their regular places in the neighborhood, ranging from the classic barber shop to the trendy salon.

So where does our crew go?

Dan: “Diego’s [Hair Salon]. The best and friendliest place to go. They give you espresso for morning haircuts.” The place is really an institution. I mean, not only is the 1900 block of Q Street NW, where the salon is located, named after the owner, but the place has its own Wikipedia page. And at $20 for a men’s cut, it’s a good deal, too.

Khelan: “I go to Roberto at Blondie’s [Hair Salon and Studio]. He does a great job, it’s easy to get an appointment and at $40 he’s not very expensive.” Blondie’s is at 1910 18th Street NW, between T and Willard Streets.

Matty: “Zak at Salon Rouge on 17th. His cousin, Salim, owns the shop. Salim and the shop are both on the ballot in the Best of Gay DC voter poll!” A men’s cut at Salon Rouge is $35, so it’s not going to break the bank. You can find Zak and the rest of the gang at 1636 17th Street NW, between Corcoran and R Streets.

Luis: “Carl’s Barbershop on P Street NW, in between Transformer and the cleaners. $18 for a haircut. I have been going there for eight years. I have seen the place change with the neighborhood. Nothing fancy at all and they always have sports on the TV.” You can find the barbershop at 1406 P Street NW.

Just outside the neighborhood, Scott Leibowitz had this one to contribute as well: “Image Hair Studio in Adams Morgan. It was right around the corner from my apartment, and I still go there because one lady “knows” me. Also when it comes to haircuts, I want to sit down and let them cut. Forced awkward chit-chat is at a minimal in the Latino-run barbershop. That and they do a very nice job.” Image is at 1824 Columbia Road NW, between Biltmore Street and Mintwood Place. A men’s cut will run you $20.

As for me, I’ve also been going somewhere close to the ‘hood for a while now since it’s close to where I used to work and there’s something to be said for someone who knows exactly what you want. Selim at Charmed Salon in the Farragut Square area is that guy for me. He does a great job and gets me in and out in a snap for $40. You can find Charmed at 1134 19th Street NW, between L and M Streets.

Did we miss any good places to get a men’s cut? Let us know if you’ve got a good place to go that we missed!

“Diego D’Ambrosio” was taken by lightboxdc in the Borderstan Flickr pool.

If you don’t already have a Flickr account, you will need to sign up for one, and then join the Borderstan Reader Photos group. Already a Flickr member? Join the group and submit up to five photos per day in the pool. We are looking for photos from D.C.’s Dupont, Logan and U Street neighborhoods.