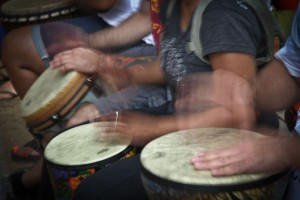 “Drum Circle” is by MichaelWalkerPhotos from the Borderstan flickr pool.