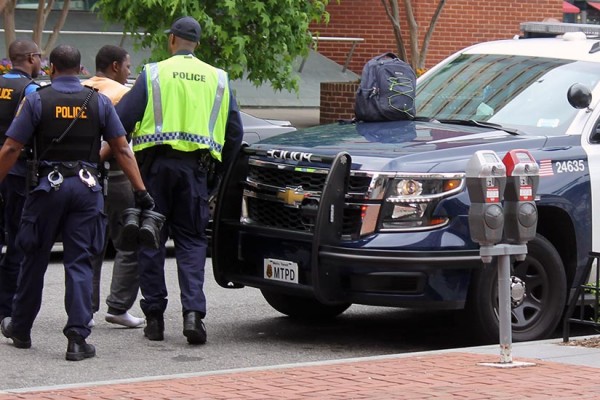 A Metro Transit Police Department officer used pepper spray on an uncooperative man who was drinking from a bottle of Courvoisier cognac inside the Dupont Circle Metro station this afternoon, a Washington Metropolitan Area Transit Authority spokeswoman told Borderstan.

The man, whose name hasn’t been released, was acting “disorderly” about 4 p.m., forcing the cop to discharge the pepper spray, WMATA spokeswoman Morgan Dye said.

He was arrested for assaulting a police officer, drinking in public and fare evasion.

The man was brought to a local hospital for treatment. Two other Metro users who were near the spraying were treated on the scene.

By Michelle Lancaster. Got news, a hot tip or want to complain about what is or isn’t in this? Let her know on Twitter @michlancaster or via email at [email protected]

DC: The New It Place for Programmers

Gone are the days that Tyson’s Corner ruled the tech world and computer geeks made their own computers in small Fairfax apartments. Or so the Post interview on the location and state of tech talent would have you believe. Firms are headed into the District in search of office locations and commutes attractive to their prospective talent pools. If you couple this with the recent trend of tech incubators popping up in DC as well, it’s less hard to believe.

In a narrow 4-3 decision, ABRA voted to fine Midtown $3,000 and to serve a three-day suspension after the bar was caught serving minors. Somewhat ironically* reported by the GW Hatchet, it seems the problem may stem from a promo group giving out ‘of age’ wristbands to underage club goers (the nightclub has an 18 and up policy, 21 to drink). A block over, Heritage India ran into a major fine after violence erupted at the club, which Heritage largely blamed on an outside promotion company. I’ll direct your attention to a Washington Examiner article that discusses the challenges of licensing what appear to be ‘pop up’ companies. (* I’m not saying it was GW students that were involved in the underage drinking, and there is no indication that GW students are anything but law abiding students, so please calm down.)

Sausage on U Street

Borderstan’s music venues are proving to be a boon for 13th Street Meats, a new sausage start up. They are serving at U Street Music Hall (pho dogs), Black Cat’s Food for Thought Cafe (half-smokes) and other area bars like Dodge City and Pharmacy Bar. The owner, Scott McIntosh, has made the most of his bartending connections in introducing the product, but the quality of the product is keeping it flying off bars. He’s a Columbia Heights resident, hence the 13th Street name, so we are claiming you, Scott! For more info on the hormone-free meats, where to find them and some drool-worthy pictures, check out DCist’s coverage.

WMATA: We Want to Lower Expectations

Done! Cross that one off your New Year’s resolution list. We kid, we kid. But in all seriousness, Metro told TBD the “reason” they estimated a full year for the repair of the two Dupont South escalators  was to lower expectations of riders, so they could hopefully beat the timeline for completing repairs. This is probably a pretty good strategy, but I think it only works when you don’t tell people that it’s a gambit. This is precisely the point of the TBD piece, which is (IMO) pretty well done. Thanks for talking to us more, Metro. We know those escalators have more fail in them than the Twitter Fail whale. Now quit yer yappin’ and show us some more men at work.

Melody Records in Dupont Circle is closing (story from Washington Business Journal). Georgetown’s Barnes and Noble has already closed, we learned from DCist. What do the two have in common? It appears, according to blog Urban Spaces and Places, quite a bit despite their different retail footprints. As commercial space is generally over-valued in DC, they argue, this leads to increased rents and even higher expectations of earnings at such retail locations. It may have little to do with the profit margin of the store, and much more to do with the market and new players with deep pockets, often in the food industry. If you started thinking about high-end burger concepts from out of town, well, that makes two of us.

But a New Opening in an Old(er) Space

Whiskey is back on the menu at the space that formerly housed Porter’s, a bar beloved by many Terp alumni and M Street bar crawlers. Irish Whiskey Public House is due to open this Friday and got a pretty nice renovation, from what we see on Urban Daddy. For anyone nostalgic enough to miss the dilapidated interior of the dive bar, you can still see small touches in the new photos but overall, this is a much more aesthetically pleasing place to grab a drink. Oh, and there are over 60 types of whiskey if you want to toast to the past, present or future of the 18th and M Street strip.

Taylor Gourmet junkies can feast their eyes on the first peek from the The Washington Post. The new 14th Street location is open for business in the former Ruff and Ready space. I’m guessing the cold kept most sandwich connoisseurs at bay today, but am a little surprised at the total lack of a line. Have we reached sandwich saturation?

I can’t resolve to complain less, because then you would have nothing snarky to read. But I did resolve to have more fun and take things less seriously. Step one: get thee to Riot Act Comedy Theater with me tonight to see the guys from Gaylarious take the stage. This time, Chris Doucette and Zach Toczynski can be snarky for me and I keep my resolution longer than the first one (ordering pizza on New Year’s Day and skipping the gym is probably not in compliance with “eat better and exercise more.”) (Full disclosure: the boys were kind enough to comp me after I said they were “sort of” hilarious.)