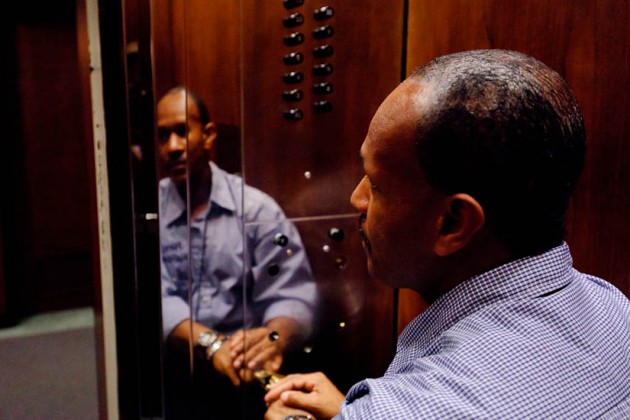 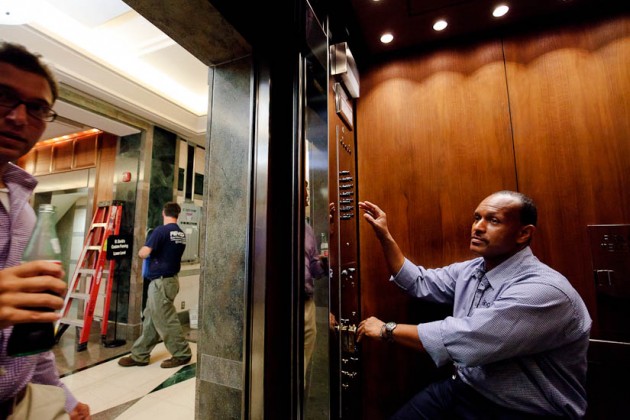 Step inside an elevator at the Ring Building south of Dupont Circle and you’ll find a relic of the past.

Each weekday, a small troupe of elevator operators transports more than a thousand people up and down a 12-floor office building.

It doesn’t take a local historian to know that elevator operators are rare in D.C. Most, if not all, of the other elevators in the city are operated by the users themselves.

But the Ring Building, built in 1947, may be the last public office building in D.C. that employs elevator operators, apart from the U.S. Capitol.

Would it be more cost-effective to use an automated system? Probably. But 49-year-old elevator operator Cleveland Johnson says his profession has more to do with sentimentality than efficiency.

According to Johnson, the man who built the building, Gustave Ring, made the job permanent as one of his final wishes.

“It was one of Mr. Ring’s wishes on his deathbed that the building always have elevator operators,” says Johnson while making eye-contact through his reflection on the polished door. “It makes it feel fancy.”

Operating the elevator is more complex than it would seem. To change floors, operators must press a floor button, then tug on a brass lever to close and open the elevator door. There are also three switches to control the light, ringer and air inside the elevator.

Ascending or descending inside the cars can sometimes feel like an amusement park ride.

“If [the elevator] was a car, it’d be stick, not automatic,” Johnson says.

Johnson adds that elevator operators at the Ring Building are actually licensed for the line of work, and that he was required to take a three-minute test about maximum weight capacity and occupancy. Still, Johnson says his job isn’t too involved.

“There’s nothing to it, really. It helps if you’re not claustrophobic,” he says with a laugh. “And good hand-eye coordination helps, I guess. That’s pretty much it. It’s not rocket science. The hard part is dealing with peoples’ personalities.”

A group of young men dressed in khakis and button-downs and loaded with carry-out food from a neighboring restaurant step inside the elevator. Johnson selects the seventh floor, closes the door and sends the elevator lurching up.

“I know a lot of people’s floor and I don’t know their name,” Johnson says. “It goes both ways. Sometimes people see us and sometimes they don’t. People get used to us being there and they just zone out.”

Johnson has worked at the Ring Building for seven years and said he makes about $1,700 per month after taxes. He estimates that he travels up and down the elevator shafts more than 200 times during each eight-hour shift.

Though there are rumblings that management plans to install new, automatic elevators in a couple of months, Johnson is confident he’ll have many more years to hone his button pressing and lever pulling.

“I don’t think they’re just gonna toss us out of here,” says Johnson.