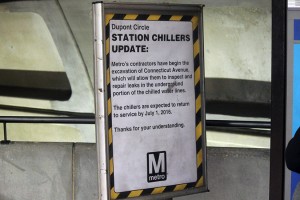 Cool air could flow through Metro’s Dupont Circle and Farragut North stations in a matter of days or not at all this year.

That’s the latest news from Metro, which earlier this week updated riders on the status of those sweltering stations’ “chillers.”

The chillers, which use water to help cool air pumped into the stations, stopped working last summer due to leaks in a 40-year-old pipe that feeds water into the system.

Metro originally estimated it would repair those leaks and turn on the chillers by July 1, then again by July 16 and beyond. As of this morning, the two Red Line stations were still much hotter than normal.

But relief might be on the way, Metro said.

“Additional parts have been ordered from overseas and we are currently awaiting delivery, ” the transit agency said in a statement Monday. “Once the parts arrive and are installed, crews will again attempt to pressure-test the pipe.”

If the test is successful, the stations could have cool air “within days,” Metro said. But if the tests fail, “crews will likely need to excavate Connecticut Avenue NW for further repairs.”

“In that eventuality, chilled air service will not be restored this year,” officials added.

When will chilled air flow in Metro’s Dupont Circle and Farragut North stations? Not any time soon, it seems.

That’s because the transit agency has again pushed back repairs of the “chillers” that help cool those Red Line stations.

“Metro’s contractor has completed pressure tests of the pipes under Connecticut Ave NW (off Metro property) that provide chilled air service to Dupont Circle and Farragut North stations,” Metro said in a statement last Friday. “The test results are currently being evaluated to determine next steps. Unfortunately, chilled air service has not yet been restored.”

The chillers stopped working last summer due to leaks in the 40-year-old pipe that feeds water into the system, officials said. Metro originally estimated it would repair those leaks by July 1, then again by July 16.

As for when those chillers might actually come online, Metro did not set a firm date.

“We are working with the contractor and other outside parties to resolve this issue as soon as possible,” the agency said. “In the meantime, tunnel fans will remain on at all times to provide air circulation to the two stations. We apologize for this inconvenience and thank you for your understanding.” 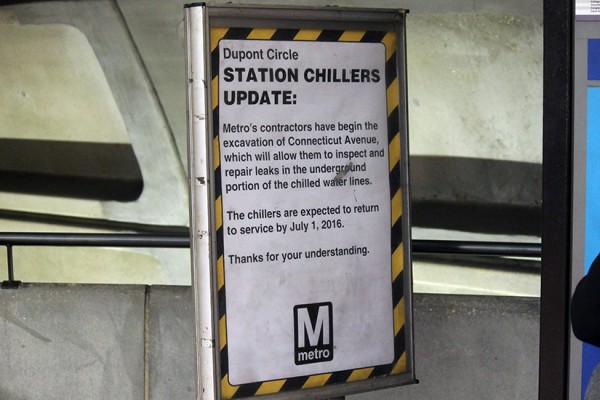 The Joan of Arc Statue in Meridan Hill Park is getting repairs, including a new sword. The statue was a gift from the “Ladies of France in Exile in New York” in 1922, according to Wikipedia. (One Photograph A Day)

Sometimes we venture outside our ‘hood when the news compels us. And the distribution of anti-Semitic posters to what appears to be targeted households in Cleveland Park, as per reports on the Cleveland Park listserv, compels us. In an account posted to the list serv, and confirmed by other members, a number of households had homemade flyers, covered in copy-pasting anti-Semitic language and references, delivered to their front doors. This kind of hate mail is bad enough, but is made worse by the fact that not all households received this little gift. On more than one street, it was only delivered to houses where Jewish families, or those that “looked Jewish,” lived. The flyers and incidents were reported to the police on Monday evening.

Joan of Arc Gets Waxed

The Joan of Arc statue in Meridian Hill Park is getting a little TLC. According to one observant reader (hat tip to Chris Siddall), the statue is getting a few new pieces, including the replacement of a sword. She is also getting some work done, including a new coat of patina and a wax. As you can see from her glamor shots in DC Memorials, this is a long overdue update for the French lady. I bet Carla Bruni approves.

Well, at least for now, as WMATA is focusing their attention on the Dupont Circle station. The Red Line, as we all know, has more than its fair share of issues and the Examiner reports that Farragut North has perhaps some of the most pressing. You know about the water leaks if you ride through the area and if you read any papers at all about a year ago, you know they found asbestos in the ceiling panels while beginning the renovation. While that remediation has recently ended, don’t expect a smooth ride through these two stations on the Red Line for awhile.