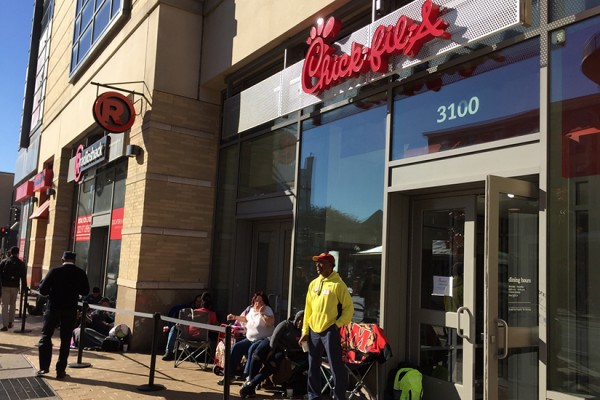 Although D.C.’s first Chick-fil-A opens tomorrow in Columbia Heights (3100 14th St. NW), about a dozen people were spotted lining up in front of the forthcoming eatery early this morning.

Why? Well, here’s one good incentive: The first 100 customers through the restaurant’s doors will win free chicken sandwiches for a year.

Still, to win the free food, you have to wait all day and night until tomorrow’s grand opening event. Is camping out on the cold sidewalk truly worth 52 free chicken sandwich meals?

Jeff Cousins, 60, said yes, it is. Cousins said he showed up with a blanket and a collapsible chair at 12:45 a.m. to be the first in line.

“I love Chick-fil-A. For us, it’s a family affair,” said Cousins, who added he took the day off and that being the first person in the fast food joint was on his “bucket list.”

Laura Bibbs, 34, also took the day off from her job to stand in line. “I’ve been waiting forever,” Bibbs said. “We’re really committed.”

Bibbs, who called herself “one of the biggest Chick-fil-A fans,” added she snagged the runner-up spot at 5:15 a.m.

But the prospect of standing around has already caused other early birds to chicken out, said several people waiting outside the eatery. Some who lined up earlier this morning reportedly left after they realized what they had to do to win the free food.