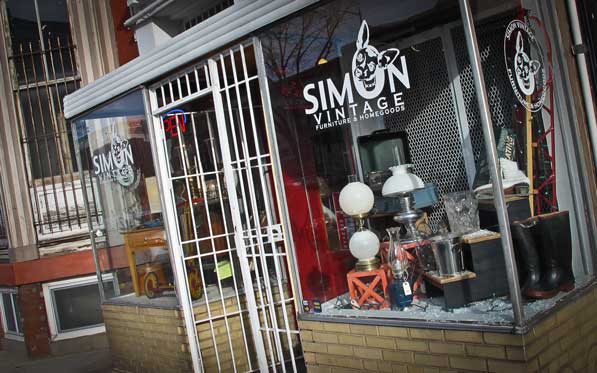 Shaw furniture and homegoods store Simon Vintage (1911 9th St. NW) will close on Oct. 24 to move to a new location in New Jersey.

The store will reopen in Neptune City, N.J., according to the company’s website.

“Steven, Sean and Simon want to say that we have very much enjoyed sharing our venture with you over the past three years,” the owners said in an email to customers over the weekend. “We will miss our little location on 9th Street and all of the great people that have come in to browse and shop with us.”

@JenCVB Neptune, NJ just south of #asburyPark but we will be loading up online store at https://t.co/g3gPNHbUKP so stick with us!!

Fans of the store’s eclectic furniture and decorations will still be able to shop online after the D.C. location closes at the end of the month.

14th and T Streets NW: Room & Board  officially opens Monday, June 14.  There was a preview opening this weekend. (Tom Hay)

Furniture retailer Room & Board opened the doors to its first DC store this weekend at 1840 14th Street NW, at the southeast corner of 14th and T. Based on the crowds in the store just an hour after opening, it appears 14th Street has a new landmark. Furnishings are in the classic contemporary style, which will have strong appeal among the young professionals who have moved into the area in recent years.

The Saturday and Sunday opening was a preview and the official grand opening of the 36,000-square-foot store is Monday, June 14. Jill Byrnes, Creative Director for Room & Board, said she expects several thousand to visit the store in the first few days.

Inside Room & Board. (Tom Hay)

First, some background on the building. The store is a complete renovation of the former R.L. Taylor building which was built in 1919. The location was a showroom for the Ford Motor Company.

In recent memory, the building was home to the Church of the Rapture which sold the property in 2005. Various plans came and went in the past five years, including condominiums and then a combination yoga studio-comedy club-restaurant.

The “Georgetown style” renovation of the once drab building is impressive inside and out. Many of the formerly bricked-up windows have been opened up, giving the store a welcoming facade and providing great daylight for the interior spaces.

Room & Board has received both praise and criticism in the local press and neighborhood blogs. Some argue that a national chain with a massive footprint such as R&B will harm independent retailers such as Vastu, Muléh, Urban Essentials and RCKNDY, which have operated in the 14th and U corridor in the past few years.

Supporters say that the Room & Board will anchor the area as a home furnishings shopping destination, in turn bringing more foot traffic and new customers to the area. Only time will tell, but if the crowds I saw this weekend on 14th Street are any indication I predict and hope this is a win-win for all.

Tom Hay is a business and general news contributor to Borderstan. A 23-year resident of the neighborhood, he is a law librarian by profession.

It appears that plans for turning the large building at the southwest corner of 14th and T NW–including a 24-hour diner, theater, yoga center and comedy club –may be dead. Seems a large furntiture retailer has come along and made an offer to the owner. Two accounts of the matter, at Greater Greater Washington and Washington City Paper.

Prospects for the Tryst/Diner/ comedy club /yoga studio/dance company plan for 14th and T, which has become a major campaign issue in 2B09 are looking dim. The City Paper found out that the owners have decided to sell to a big-box furniture store, Room and Board, instead.

The deal isn’t totally done, and some neighborhood activists including 2B09 candidate Doug Rogers are already pushing Room and Board to pull out of the deal (which they have the option to do).

We learned today that Dave Chappelle, yes the Dave Chappelle, has signed on as a potential investor with the Diner/Tryst/ comedy club planned for the old Church of the Reformer at 14th and T Streets NW, the development plan we wrote about in July.

The bad news? That plan is close to imploding. Sources close to the deal say that the earlier agreement to lease the space from the current owner fell through. Rather than let their dream die, Diner/Tryst/Open City owner Constantine Stavropoulos and DC-Improv and Riot Act comedy impresario John Xereas, along with a few others–including Chappelle, a Xereas acquaintance who has D.C. roots–worked to get a deal together to buy the building. The bid is in the neighborhood of $9 million. The problem? They’re not the only ones interested.