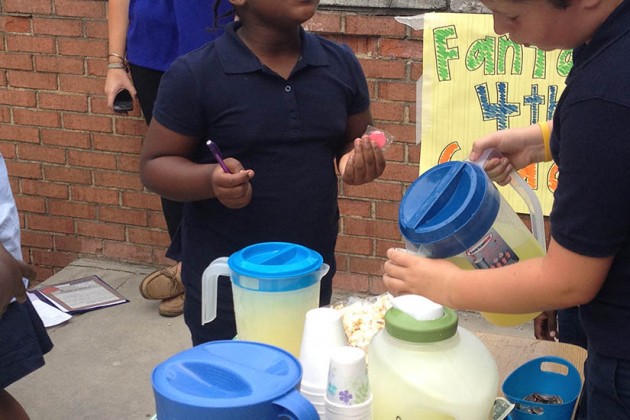 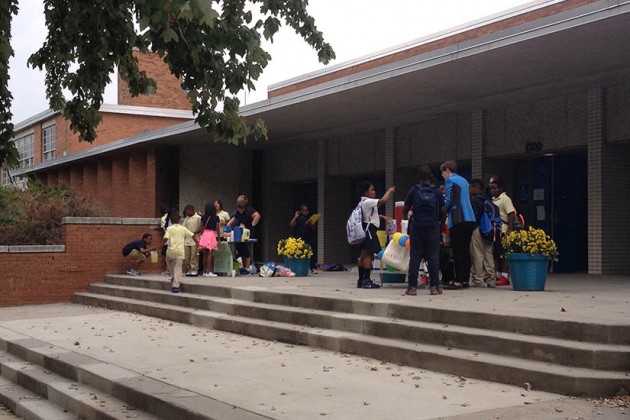 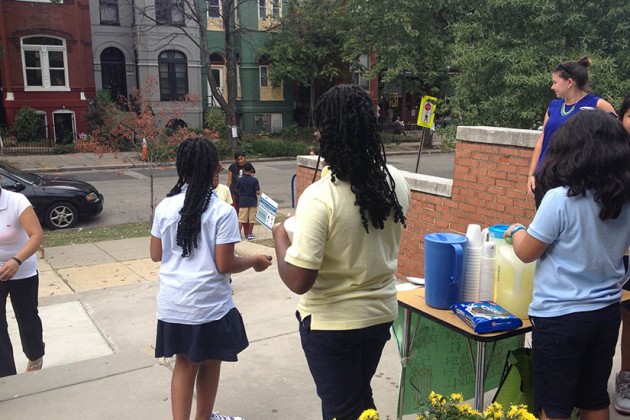 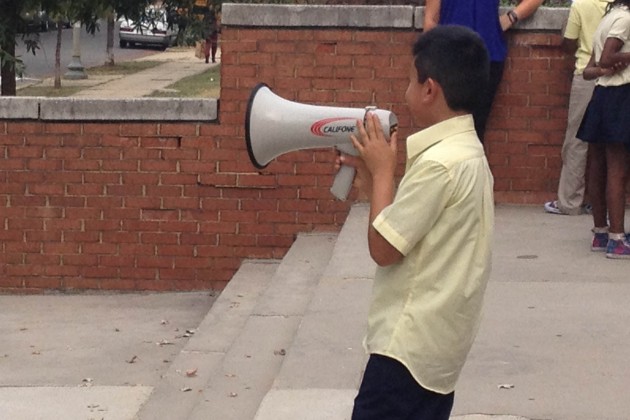 There may not be any troops at Garrison Elementary near Logan Circle, but this week there was a war.

The annual Garrison Elementary School Lemonade War pits fourth and fifth graders in the extended day before- and after-school program against each other to see who can sell the most lemonade.

The contest was inspired by the book “The Lemonade War” by Jacqueline Davies, which teaches business and economic concepts through a narrative about two siblings trying to out-sell each other in the competitive lemonade stand market.

The students in each grade were given $20 to buy supplies for their lemonade stands and were tasked with setting prices and selling the lemonade before and after school in front of Garrison Elementary at 1200 S St. NW.

The students also had to decide how much of their proceeds to re-invest in more lemonade and how much to keep. Whichever grade has the most money at the end of the week will be the winner, and both classes will get to decide how to spend the money they raised, according to Garrison principal Collin Hill.

Each grade took different strategies for their stands: The fourth graders went for variety, with small medium and large sized lemonade available, while the fifth graders adopted somewhat of a franchising strategy, stationing lemonade sellers in front of the school and at the playground behind the school.

A fourth grader who was pouring lemonade from a pitcher bigger than his head said on Wednesday that the class decided on the prices of the lemonade by taking a vote. Meanwhile, a fifth grader just feet away used a megaphone to assure passers-by that his grade’s lemonade was better.

Teachers were on hand to monitor the students but did not intervene with any business operations, leaving them to calculate change and serve customers themselves.

Who won and how much each grade has raised will be known on Friday, as the students had yet to count the cash filling their boxes. But it’s safe to assume the real victors of this crash course in capitalism were the paying customers. 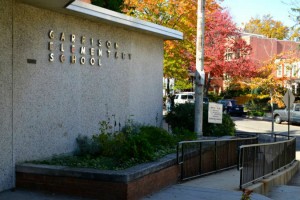 The yoga class will take place at the school (1200 S St. NW) from 9-10 a.m. The class is $20 and participants must register online by this Thursday to secure a spot. All those who reserve a spot will be entered to win five free classes from Shaw Yoga.

Attendants will also get free water and apple juice courtesy of Costco, granola courtesy of Michele’s Granola of Maryland, and lip balm from Fabulous Frannie.

Garrison’s Parent Teacher Organization hopes to use funds raised to support a Saturday art workshop that it plans to launch this school year in partnership with Wolf Trap. 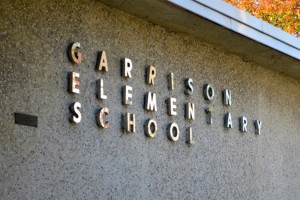 Garrison Elementary School is seeking supplies and volunteers to help usher in the new school year.

The school is currently accepting donations of pencils, erasers, glue, crayons and other supplies. Residents interested in donating supplies can drop them off at the school (1200 S St. NW) this Saturday between 9 a.m. and noon.

The school is also seeking members of the public to help with a community-led volunteer day this Friday and Saturday at 10 a.m.

Volunteers will help with sprucing up classrooms, installing bulletin boards and cleaning up the school’s common areas.

Now that Garrison Elementary will remain open, the administration is preparing for new students for the 2013-2014 school year.

In preparation for the public school process, Garrison will host four open houses over the next several weeks. At the open houses, attendees will meet the principal and the teachers, tour the classrooms, hear an overview of school policies and get an overview of the Head Start program. Attendees will also have the opportunity to ask questions.
The open house sessions are scheduled for the following dates and times:

On Thursday, DC Public School Chancellor Kaya Henderson announced revisions to the November proposed plan to close 20 public schools in the District. One of the schools in the proposal included Garrison Elementary School (1200 S Street NW).

“Garrison’s staying open is a community victory!” Ward 1 Councilmember Jim Graham said. “Parents, students, and hundreds of community volunteers worked hard to convince DCPS that Garrison had to stay open.  And in the end, the message prevailed.”

Ward 2 Councilmember Jack Evans agreed: “I’m pleased to see that the Chancellor made the right decision and kept Garrison and Francis-Stevens open”, Evans said. “This is a new opportunity, and I know parents and children will take advantage of it. I am hopeful that Chancellor Henderson will continue to work with the parents and neighbors going forward to ensure the long-term vibrancy of these schools. This is a great day for Ward 2.”

Garrison PTA released a statement, which included the following paragraph:

On Wednesday evening, December 5, the Garrison Community showed up in full-force at the DC Public Schools meeting on the School Consolidation Proposal. Hundreds of District residents attended, representing Garrison Elementary and other schools slated to close next year.

Ward 2 D.C. Council member Jack Evans addressed DC Public Schools Chancellor Kaya Henderson, and told her that he is against the city’s plan to close the Logan Circle school.

“I do not support closing Garrison,” said Evans at the meeting. “Garrison has become a focal point of the Logan Circle Community.”

Evans even tweeted live from the meeting with comments attendees were making, as well as photos of the crowd.

On November 13, Henderson announced a plan to consolidate the DC public school system. The plan includes a proposal to close Garrison Elementary and 19 other schools throughout the city.

On Wednesday, December 5, DC Public Schools (DCPS) will hold a community meeting on the proposed school consolidation and reorganization plan for Wards 1-4. The meeting, which will take place from 6 to 8 pm at Brightwood Education Campus (1300 Nicholson Street NW), will provide an opportunity for parents and community members to provide feedback on the proposed plans.

Prior to the community meeting, Garrison parents, community members and supporters will meet at Garrison between 4 and 5:30 pm to have a group discussion; a light supper will be served.

Childcare will be available for the evening’s meeting and Garrison PTA will provide buses between Garrison and the community meeting location.

Those who are interested in participating in the evening’s meeting and pre-meeting activities must RSVP online.

This week, DC Public Schools (DCPS) Chancellor Kaya Henderson announced a proposal to close 20 schools in six wards across the city. Two of the schools on the list – Garrison Elementary School (1200 S Street NW) and Shaw at Garnet-Patterson Middle School (2001 10th Street NW) – are expected to close for the 2013-2014 school year.

On Thursday, Nov. 14, Councilmember Jack Evans (D-Ward 2) sent an email to community members letting them know that he and Councilmember Jim Graham opposed to closing Garrison.

“Garrison, with its lively and involved support system consisting of parents, a strong PTA, and community support from the Logan Circle Citizens Association and the ANC, should remain open,” said Evans.

“If consolidation is needed, students can come from Seaton to Garrison. Garrison is at nearly 70 percent capacity – higher than almost any other school set to close.”

Council Chairman Phil Mendelson has scheduled an upcoming Council hearing for Nov. 19. Evans is requesting that the Chairman re-open the witness lists so that more community members can put submit views on the record.

The DCPS website lists several ways in which parents and the community can provide feedback, including:

“Please take advantage of all these forums to express your views,” said Evans, who plans on participating in the hearings and in a meeting with Teachers’ Union President Nathan Saunders.

Do you frequently use the outdoor spaces and athletic fields at Garrison Elementary?

If so, don’t miss your opportunity to meet with the school’s new architect and landscape design team to share thoughts and opinions on future layout options for the outdoor space.

This Wednesday, May 30, Garrison’s PTA invites all community members to a meeting with the architects from 6 to 8pm to share ideas for the soon-to-be improved grounds.

Refreshments will be served and the committee is working to set-up childcare services for the evening meeting.

From Tom Hay. Questions for Tom? Send him an email. You can follow him on Twitter @Tomonswann.

The library at Garrison Elementary School, located at 1200 S Street NW in Logan Circle, has won a complete makeover from Target and the Heart of America Foundation. In addition to a renovation of the physical space, the library will receive more than 2,000 new books and upgrades in technology.

Garrison was one of just 41 school libraries nationwide to benefit from the prize. Schools selected for the extensive rehabilitation were evaluated and chosen based on need, site visits and dedication exhibited by school staff to carry out the mission of the program. The transformation will take place over the summer so the new space will be ready for students at the start of the school year in fall 2011.

END_OF_DOCUMENT_TOKEN_TO_BE_REPLACED

From Tom Hay. Questions for Tom? Send him an email.

Anyone who has lived in Logan Circle for more than 10 years can attest to one of the most noticeable changes in the demographics of the neighborhood: the arrival of children. Baby strollers along 14th Street and high chairs in Logan Tavern on P Street are commonplace and no longer turn heads. As the popularity and convenience of Logan increases, couples aren’t automatically departing to the suburbs once children arrive.

Ann McLeod, president of the Parent-Teacher Association (PTA) at Garrison Elementary School at 12th and S Streets NW in Logan Circle, summed up the feelings of families with young children who choose to stay put: