Halo Lounge on P Street changed its name to Mova on New Year’s Day. The new name is a take on owner Babak Movahedi‘s name and part of the lounge’s rebranding.

Mova’s Facebook page explains the lounge’s evolution from Halo to Mova as well as planned design changes and a plan to become more environmentally friendly:

END_OF_DOCUMENT_TOKEN_TO_BE_REPLACED 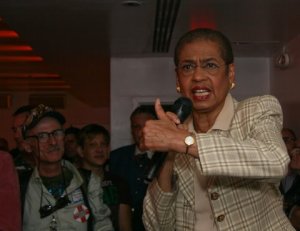 There were many political poobahs (yes, it’s a word I love) on hand; I spotted Councilmembers Jim Graham (Ward 1), Mary Cheh (Ward 3) and [I think I saw] Phil Mendelson (At-Large). At-Large Council candidate Clark Ray was there as was DC’s delegate to Congress, Eleanor Holmes Norton. END_OF_DOCUMENT_TOKEN_TO_BE_REPLACED

Luis and I went for a late supper last evening and ran into crew and cast from MTV’s “Real World: DC” on the sidewalk in front of Stoney’s and Halo Lounge. My only impression was that these were a bunch of kids who looked tired and bored. People around them seemed nonplussed. So much for the glamor and excitement of reality TV.

The setting for “The Real World: DC” will be this house at 2000 S Street NW. (Photo: Luis Gomez, Luis Gomez Photos.)

An update from this morning’s posting… Luis and I wandered over to 20th and S NW late this morning to get a photo of the rumored house-to-be for the DC version of “The Real World: DC.” We heard sounds of workmen inside and, just by chance, saw a couple of guys outside (not workmen). One had a camera and the other one was taking notes. Without identifying their affiliation, I will say that they confirmed that 2000 S Street NW will be the house for The Real World.

Moreover, at least one of the cast members will be a gay man and apparently one of the local venues for the drama-to-come will be Halo Lounge at 1435 P Street NW–across from Whole Foods and located right here in Borderstan. We will try to have more details for you later.

As noted before, I think DC needs some vapid drama with pretty kids doing faux-dramatic stuff in an unreal world setting. Way too many people here who want to save the world (but God bless them). We need some silly balance.