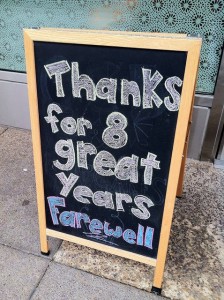 A cupcake store is leaving Dupont after eight years.

Hello Cupcake, which opened at 1361 Connecticut Ave. NW in 2007, announced its closure last week. A Borderstan reader tipped us off to the news last night.

“After 8 marvelous years in Dupont Circle, we are sad to announce the closing of Hello Cupcake,” reads the company’s announcement. “We wish to thank our wonderful customers, our supportive neighboring businesses, our fellow chefs and bakers in the D.C. food community, and our amazing staff, past and present.”

From Ashley Lusk. Check out her blog, Metropoetrylis. Find her on Twitter @arlusk or email her.

If you’re in the need of a sweet treat head to Hello Cupcake to pick up a new variety. Starting today, you can indulge in a sweet partnership between Hello Cupcake and Chocolate City Brewery — the DC Love Child. I got a taste of the Child at a preview Thursday night at Nellie’s Sports Bar on U Street NW.

The DC Love Child is a creation of Hello Cupcake and Chocolate City Beer. (Ashley Lusk)

This specialty cupcake is infused with Cerveza Nacional dark Vienna lager, covered in bourbon buttercream and topped with a chocolate-covered potato chip. Let’s be real, this is a silky, sugary dessert–and it is rich, but the malty hints make this the beer drinkers’ cupcake.

Hello Cupcake owner Penny Karas and Don Parker of Chocolate City Beer met at a Think Local First event and determined that their cupcakes and beer belonged together — thus DC Lovechild was born. Karas said she expects the alcohol-infused cupcake to do well, considering their Irish Carbomb flavor is already their best-selling specialty cupcake.

Hello Cupcake locations can be found in Dupont Circle and Capitol Hill. Chocolate City Beer is on tap at several locations in Borderstan, including Churchkey, Bar Pilar and the Boundary Stone among others.

Why not another food posting this morning? Personally, I don’t find D.C. to be the best place for bakeries, delis and diners. We lack all three… places to get good, affordable food when you’re in a hurry… either sit-down or takeout.

So the opening of a new bakery on Connecticut Avenue is cause for hope. My view of food is formed by my rural Midwestern roots and the fact that I lived in Chicago for 10 years. Chicago was populated by waves of immigrants from Poland, Sweden, Germany, Greece and Italy (and many other countries) and to this day they make the city a diner-bakery-deli heaven.

Hello Cupcake is opening August 25… at 1341 Connecticut Avenue. Read all about it.