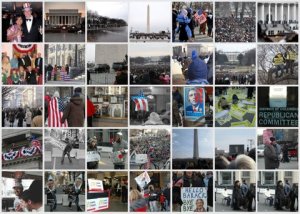 Click here to view the Inauguration Slide Show with 37 photos submitted by Borderstanians. The slide show is in Google Picasa.

Enjoy this slide show of Inauguration photographs submitted by Borderstanians James Andrews, Kathleen Carr, Steven Henry, Vince Hurteau, Devika Levy and Susan Volman. “Thank you” to all of you for these 37 photos, most of them from Inauguration Day plus a few from the days just prior to January 20.

END_OF_DOCUMENT_TOKEN_TO_BE_REPLACED

We asked readers who attended the Inaugural ceremonies on the National Mall to rate the event’s logistics. In an extremely unscientific and unreliable poll of Borderstan.com readers, 61 respondents (as of Jan. 31) said the following about Inaugural ceremony logistics:

Sorry, Borderstanians… I know that this has nothing to do with public safety or events in our neighborhood. But, I have had quite a few Inauguration 2009-related postings here, so that is my excuse for posting this photo: Ms. Franklin sang “My Country, Tis of Thee” (YouTube video) at the ceremony. Then, I saw this photo at the blog, Joe. My. God., and I had to post it. I have always loved Aretha Franklin. And this hat? Well, it’s worthy of passing along the photo. Apparently, the Detroit millener cannot keep up with orders for the hat.

Jan. 20, 2009–The Obamas at the Neighborhood Ball at the D.C. Convention Center. (Photo: Luis Gomez, One Photograph A Day.)

Happy post-Inauguration, Borderstanians. The hordes have left town and today I felt an eerie calm descend on the city. After gonig to the National Mall for the Inaugural ceremony, we had the good fortune to attend the Neighborhood Ball at the D.C. Convention Center last night. It was televised live by ABC and was an “official” ball… the first of 10 balls that President and Mrs. Obama attended.

END_OF_DOCUMENT_TOKEN_TO_BE_REPLACED

Keith Olbermann, left, host of “Countdown” on MSNBC, on the National Mall. (Photo: Luis Gomez, One Photograph A Day.)

We managed to make our way to the National Mall this evening to the MSNBC booth on 7th Street SW, just south of Constitution Avenue. Luis got this photo of me with “Countdown” host Keith Olbermann as he emerged from the MSNBC trailer.

END_OF_DOCUMENT_TOKEN_TO_BE_REPLACED

The “We Are One” Inaugural concert on the National Mall at the Lincoln Memorial on Sunday.

It’s beginning to look like the American people were simply the invited guests of HBO yesterday to the “We Are One” concert at the Lincoln Memorial on the National Mall.

I cannot say these stories are completely verified (from my online searches) and it will be interesting to see what HBO ends up saying (or doing) about the matter. It seems HBO did two things Sunday:

END_OF_DOCUMENT_TOKEN_TO_BE_REPLACED

National Guard troops at the corner of 15th and R NW on Monday afternoon.

UPDATE at 11:40 p.m.: Just back from walking the dog. I talked to two groups of the guardsman and the guys here in Borderstan are from Iowa.

I saw National Guard troops in Borderstan this afternoon. These guys were at the corner of 15th and R NW next to the Fifteenth Street Presbyterian Church; a few minutes later they joined a larger group at 14th and R NW. Anyone know their exact mission?

The Washington Post’s Going Out Gurus are blogging Inauguration 2009 festivities. By the way, exactly who are the “Going Out Gurus?”

Official Inauguration 2009 activities kick off at 2:30 p.m. today with the free “We Are One” concert at the Lincoln Memorial. HBO is also showing the concert today to all cable subscribers, even if you don’t have HBO. (Image: HBO Web site.)

UPDATE at 3:53 p.m.: Well, COMCAST is not providing HBO’s live feed of the concert for free. It was my mistaken understanding they would do so. Hope they show it at 7 tonight. But, the live online feed at HBO.com was great.

If you are heading down to the Inaugural Concert at the Lincoln Memorial, here’s some info from the D.C. Government’s official Inauguration 2009 Web site (below).

The line up of mega-stars includes Beyonce, Bruce Springsteen, Bono/U2 and Stevie Wonder. The rest of the lineup is just about as impressive.

END_OF_DOCUMENT_TOKEN_TO_BE_REPLACED

If you live less than two miles from the National Mall, officials recommend that you walk. (Image: The Washington Post.)

Wow. If you live less than two miles from the National Mall, officials recommend that you walk to Inaugural festivities. Good thing we live downtown in Borderstan and walk a lot, all the time.

This is from The Washington Post (the map is great):

The bad news: Witnessing this historic occasion in person will require a bit of a schlep. The good news: Officials say pedestrians will be allowed to go just about everywhere. So what about those who have to park their cars and venture over the Potomac and Anacostia rivers on foot for the first time? Put on your sturdy shoes, grab a wind-resistant jacket and climb down into this guide to walking over the 10 bridges into the District of Columbia.

Go to article with map.