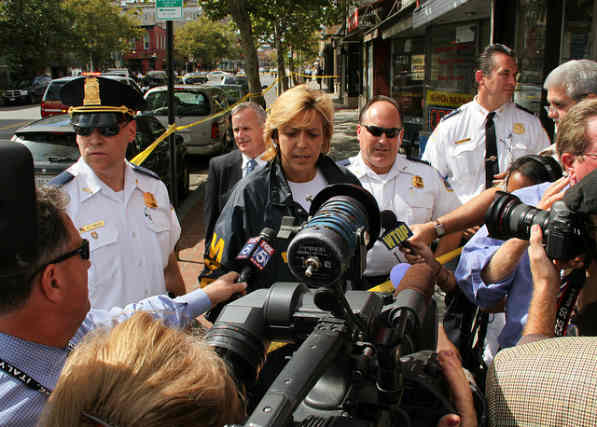 ANC 2F will will host a crime prevention meeting on July 9 at the Marriott Marquis, located at 901 Massachusetts Ave NW.

The meeting, which starts at 6:30 p.m., is intended for D.C. residents in Logan Circle, Thomas Circle, Blagden Alley, Franklin Square and parts of Shaw.

During the meeting, attendees will learn tips on preventing robberies, bike thefts and auto thefts, as well as hear advice related to installing security cameras.

The meeting will conclude with a Q&A.

Welcome to another of our occasional profiles of Borderstan People — interesting and sometimes even well-known people who happen to work or live in the Dupont-Logan-U Street area. Today’s profile Q&A is with Jacob Kishter, Third District Commander for the Metropolitan Police Department (MPD).

This is the second in our series of profiles of MPD personnel who work in Borderstan. Our first police profile was of Diane Groomes, Assistant Chief in charge of the Patrol Services and School Security Bureau. The MPD’s Third District includes three local Police Service Areas (PSAs) in the Borderstan area (301, 305, 307) and a part of 308 (see map below).

Borderstan: First, a little bit about your personal background. Where did you grow up? When did you decide you wanted to be a police officer?

Kishter: I am husband of 20 years with two wonderful daughters. My father was in the military so I spent most of my childhood traveling the world to his different duty assignments. My parents settled in Frederick, Maryland, once my father retired. I had always wanted to be a police officer. It runs in my family’s blood. My grandfather and uncles have served as police officers.

Borderstan: When did you join the MPD? Were you an officer at another law enforcement agency?

Kishter: I joined the MPD in January of 1990. MPD has been my only law enforcement position.

Borderstan: What positions have you held in the MPD? How long have you served in the Borderstan area?

Kishter: I have served in various positions over the past 23 years which included patrol and plain clothes assignments. As a sergeant I worked in the Third District, and then I moved to the Office of Recruiting where I was promoted to lieutenant. As a lieutenant I was assigned to the First District. From there I was assigned to the Office of Professional Responsibility where I held positions with the Force Investigation Team and Internal Affairs. I was promoted to captain where I stayed at Internal Affairs for several more years.

Borderstan: What’s the most rewarding part of your job… your years as an officer in DC?

Kishter: The most rewarding part of my job is my service to the community. I get the opportunity to make a difference in someone’s life every day.

Borderstan: What’s the most challenging part of your job?

Kishter: The most challenging part of my job is coordinating my 24 hour work schedule and availability with my family life.

Borderstan: What does a “typical” day entail?

Borderstan: What recommendations or tips do you have for citizens to help them stay safe? What can citizens do to become more involved in MPD’s efforts?

Kishter: Please be aware of your surroundings. If something doesn’t feel right, it probably isn’t. If you “see something, say something.” Citizens can become more involved by providing information to us about their public safety issues, attending community meetings, and becoming invested in their communities by building strong neighborhood bonds with new and entrenched neighbors.

Borderstan: Anything else you would like to share with the readers of Borderstan about your life or working in MPD?

Kishter: I have the best job in the world. I get to meet new people every day with an opportunity to build life-long relationships all while offering solutions to public safety issues. I am very thankful for all of my opportunities that the police department has offered. I am proud to be a member of the finest police department in the world!

The news that MPD’s 3rd District was getting a new commander might have received more coverage had it not been for the weekend snowstorm and the ensuing Great Snowball Fight of 14th and U. (New Columbia Heights had a good posting on the 3D changes last week.)

On Sunday, 3D Inspector Jacob Kishter took over as commander of the 3rd District, replacing George Kucik, who was moved to a “future assignment” at the Forensic Sciences Services Division.

As Inspector, Kishter essentially held the number two spot at 3D and was in charge of the Substation in Columbia Heights. Inspector Angel Medina is now commander of the 3D Substation.

Kishter came to 3D in June (replacing Inspector Edward Delgado), after having served as the number two officer in MPD’s internal affairs bureau. He has 19 years with MPD.

The 3D is the smallest of the city’s seven police districts in area, but the most densely populated. It has seven Police Service Areas (PSAs) and includes a big chunk of Borderstan with 307 (Logan Circle) and 305 (U Street and Howard University). Other PSAs are 303 (Adams Morgan), 301 (Mount Pleasant), 304 (Columbia Heights), 302 (Columbia Heights-Park View) and 308 (Shaw). In addition, PSA 208 (Dupont Circle) used to be called 306 and was part of 3D.

The 3D includes all of Ward 1 (Jim Graham) and a chunk of Ward 2 (Jack Evans) with PSAs 307 and 308. It includes many of the city’s wealthy and hipster-gentrified areas, with expensive new condo buildings and a huge amount of new commercial development. It also has public housing projects and pockets of poverty. The district is racially diverse and has new residents interspersed with long-time Washingtonians.

In addition, the Logan Circle, U Street, 14th Street and Adams Morgan areas are home to numerous clubs and restaurants that attract people from other neighborhoods and the suburbs.

Following a pattern we have seen all year, certain types of crimes are actually up when compared to 2008 or 2007. For example, the number of gun crimes is down 8% from two years ago, but is actually up 12% from last year.