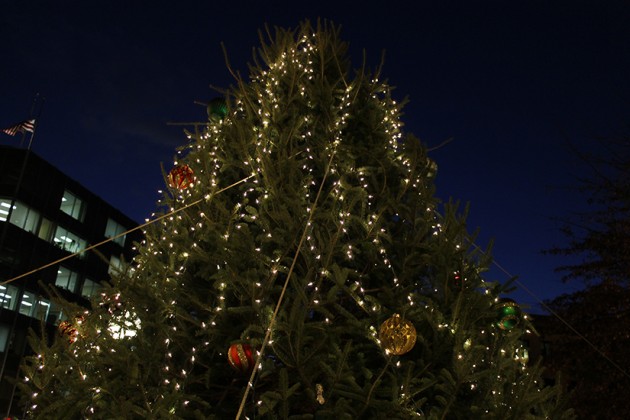 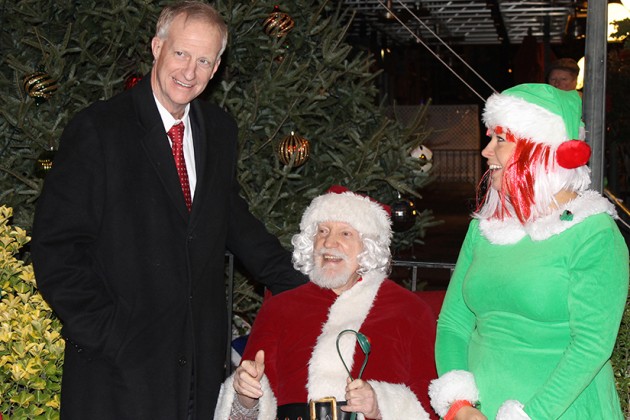 While President Obama prepared to light the National Christmas Tree at the White House yesterday evening, about two dozen Dupont residents gathered to light tree of their own.

Ward 2 D.C. Councilmember, several ANC 2B commissioners and Santa Claus himself helped neighbors usher in the holiday season by lighting a festive tree in front of La Tomate, located at 1701 Connecticut Avenue NW.

Residents munched on homemade cookies and sipped on pumpkin lattes as part of the annual celebration organized by Historic Dupont Circle Main Streets. After delivering a short speech, Evans then led the crowd in a countdown before lighting the tree.

The tree’s 1800 lights will shine each evening through the rest of the month. 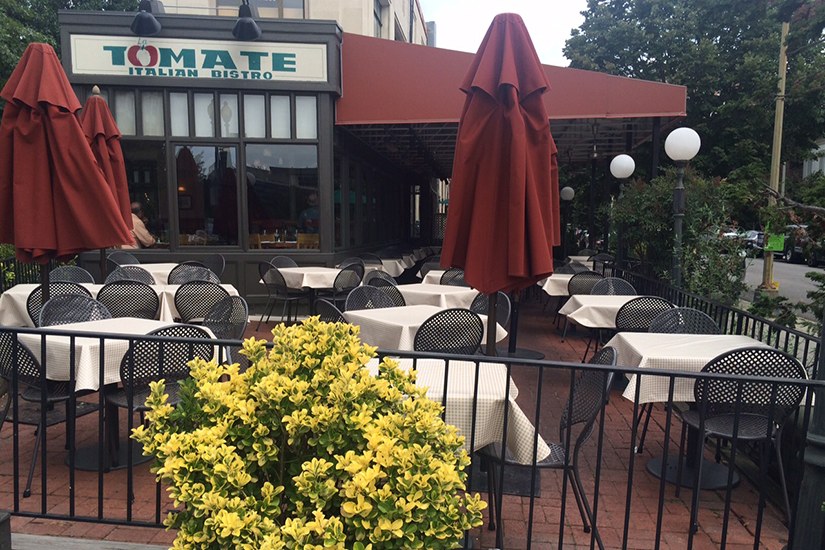 La Tomate Italian Bistro in Dupont Circle is celebrating 28 years in business with happy hour and dinner specials until Sept. 17.

The restaurant, located at 1701 Connecticut Ave. NW, has been serving Italian food since 1987.

For the next month, the bistro will host a $10 happy-hour appetizer buffet every day, which includes one drink. Diners will also be able to order a three course dinner for $28.

Jonathan ten Hoopen, who has served as general manager at La Tomate since 1993, says that the restaurant owes its longevity in part to its consistency over the years and its crowd of regulars who live or work in Dupont Circle.

“We’ve had a loyal following since we’ve opened,” he said. “We’ve always been very neighborhood-involved and active in the Dupont community and we’ve kept our price point the same.”

Although La Tomate has focused on consistency over the years, the neighborhood and city around them have changed a lot, especially in recent years.

“The most change has happened in the last five years where development [in the] east has really started to pull away a lot of the business,” ten Hoopen said. “The three big areas for dining and bars used to be Dupont, Georgetown and Cleveland Park, and we’re now three neighborhoods that are suffering a little in that regard due to growth elsewhere.”

As the cost of living in Dupont Circle has gone up, younger customers have moved east, and new restaurants have followed, ten Hoopen says. La Tomate is hoping to bring diners and drinkers back to Dupont with more affordable options and happy hour specials.

Last year, the bistro converted one of its dining rooms into La Tomate Caffe, which serves lighter, more affordable breakfast and lunch options.

“We’ve had a loyal following since we’ve opened, but what we’re looking for now is to create the next group of loyal customers,” he said. “That’s been a challenge because of where the younger generation is living and the number of new options people have.”

While ten Hoopen admits that Dupont is no longer the trendiest restaurant spot in town, he doesn’t worry about La Tomate’s longevity looking forward, describing the restaurant as an “old favorite” that people will always return to.

“There’s no doubt that we’ve felt the shift in the concentration of diners and drinkers because they have so many more options now,” he said. “But we benefit from being a neighborhood bistro for so long. It’s less of a trendy destination and more of a regular, comfortable place to be.”

The Italian joint on Connecticut Avenue always seemed to have a bit of a problem fitting in with the neighborhood, and after its last day (Wednesday) it’s still sort of hard to put a finger on “why?”

After all, La Tomate has been making ends meet in the neighborhood for years, offering many similar dishes with a less modern spin. Perhaps that was the problem, Connecticut Avenue already had Italian family style, if you are willing to count Buca Di Beppo and a red sauce joint.

I was a fan of the gelato cart and chef Amy Brandwein’s creations, and the Eater article indicates the owners agreed with at least one of those assessments.

Is this the end of NYC concepts coming to DC? The immediate comparison has to be Carmine’s, another Yankee transplant featuring giant portions of red sauce favorites.

Any reports on how business is in Chinatown? On my last visit there, I recall an over-sized menu, over-sized portions and underwhelming meals. But perhaps that plays better with tourists than the fancy salad lunch crowd around Dupont?

Here are my picks for things to do during the weekend in Borderstan, really close by or in the city… restaurants, galleries and theater.

Banana Leaves Asian Restaurant & Sushi Bar, at 2020 Florida Ave. NW. We have eaten there a couple of times and the food has always been wonderful and fresh, with a good variety of Chinese, Japanese and Thai. It is a good bet and reasonably priced. But, they have a somehow sketchy and confusing web page to order online. Take a close look at the menu online before calling for a delivery.

Azi’s Cafe, at 1336 9th Street NW. This is one of the pioneer business in the Shaw area. Their coffee is great and the service superb. They have a selection of sandwiches, soups and salads for the rest of the day. If you feel like a light meal, always a good spot.

David Sedaris, Wed. Oct 7, at the Lisner Auditorium, 730 21st Street, NW: “With sardonic wit and incisive social critiques, David Sedaris has become one of America’s pre-eminent humor writers. The great skill with which he slices through cultural euphemisms and political correctness proves that Sedaris is a master of satire and one of the most observant writers addressing the human condition today.” Sedairs is a favorite of many friends. END_OF_DOCUMENT_TOKEN_TO_BE_REPLACED