Click to enlarge:There were 2 violent crimes in April in the 14th Street area, both of them robberies without guns. (MPD Crime Database)

Detailed numbers are below the fold and are from the MPD Crime Database.

Declining property crime. The decrease in total crimes in April YOY in the 14th Street area was due primarily to the 26% in property crimes. These account for the huge bulk of all crime–91% of all reported crimes last month were property crimes, as opposed to violent crimes, which were 9% of the total.

The decrease in property crimes was due to the decreasing number of thefts from autos (“smash and grabs”), which declined to 7 last month compared to 16 in April 2009. But, the total number of property crimes in the 14th Street area is still higher than two years ago when there were 16 property crimes.

The 14th Street corridor crime reporting area (see map) covers a circular area that radiates 1,000 feet from 14th and QU NW–an area that roughly runs  from 15th Street on the west to Vermont Avenue/Logan Circle on the east and from S Street on the north to Rhode Island Avenue on the south.

END_OF_DOCUMENT_TOKEN_TO_BE_REPLACED 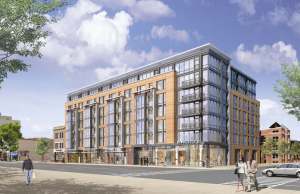 Artist rendering of the development planned for west side of 14th Street NW between S and Swann Streets. What kind of retail will grace the first floor? (Image: JGB Companies via DCmud.)

As of Tuesday evening, approximately 150 to 200 people had voted in the Borderstan poll, “14th St NW: What Do You Want More Of? This is an approximation as voters could select as many of the 12 choices as desired.

A total of 912 votes were cast for 11 choices plus Other to the question, What kind of stores and businesses do you want more of on the 14th Street NW corridor… between Thomas Circle and Florida Avenue NW? You can pick as many as you want.

My initial read on the results, below, of this very unscientific poll, is that respondents tend to want more food options in the affordable range (lower-priced restaurants and delis) along with places to hang (coffee houses). In addition, people would like to have more general shopping options, including clothing stores.

Noticeably, there was no excitement among respondents to this poll for more furniture stores, art galleries or clubs/lounges.

Here are the results: