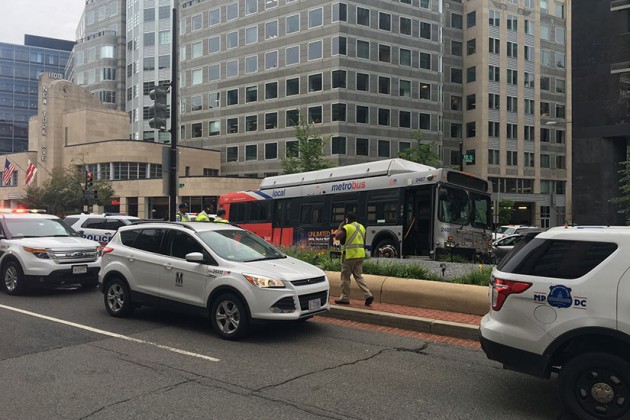 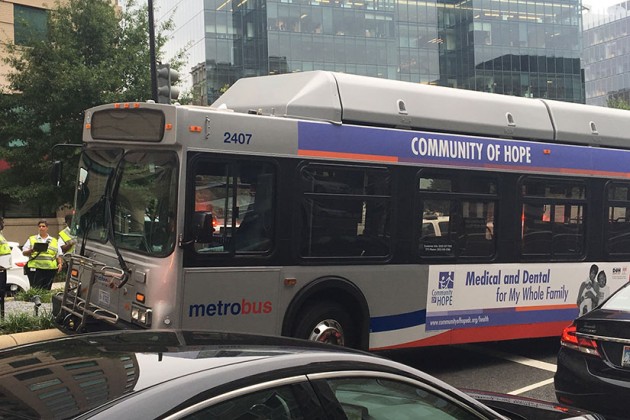 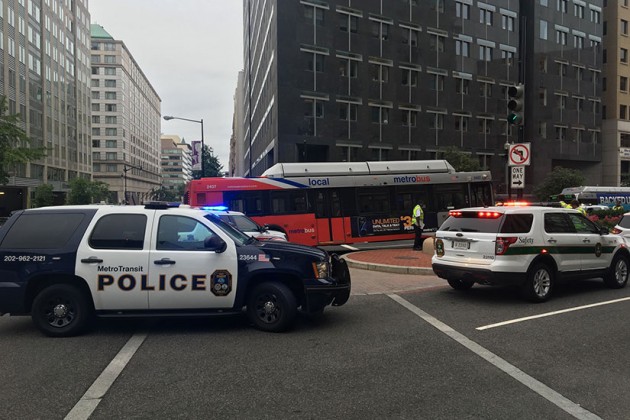 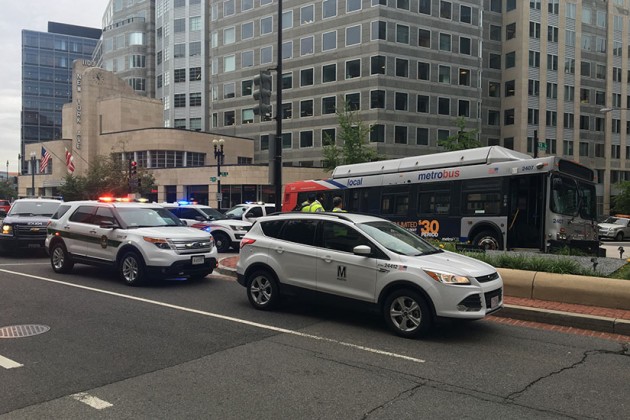 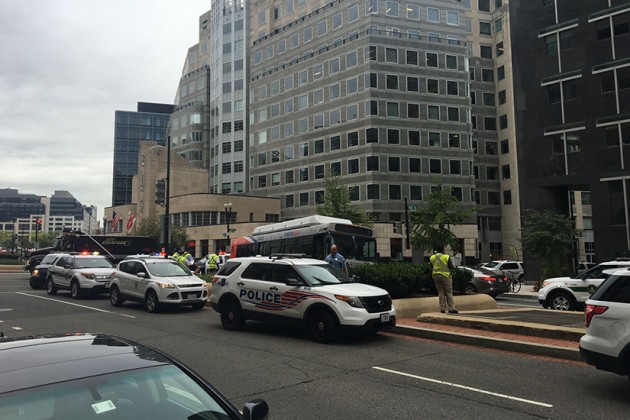 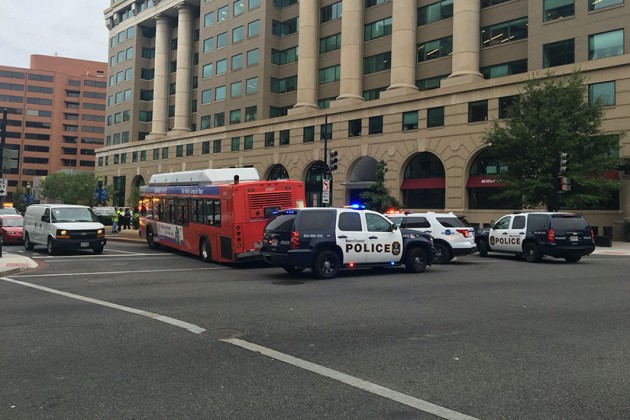 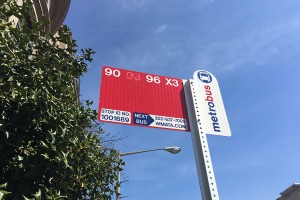 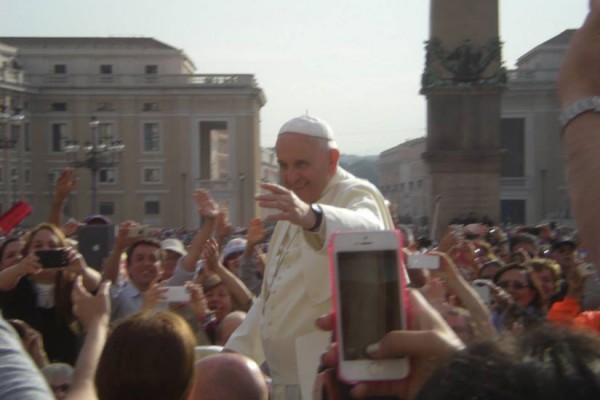 Metro might just offer a solution to the bus problem many residents are experiencing for the S2 and S4 buses on 16th Street NW.

Following up on complaints and a community meeting organized by ANC 2B04 Commissioner Kishan Putta, Metro will hold a meeting for the community next Wednesday, February 20 at The Chastleton Ballroom (1701 16th Street NW).

The purpose of the meeting will be for Metro to present its proposed solutions to the bus back-up to the public.

The routes on the 16th Street bus line have the highest ridership in DC, and many commuters are seeing buses pass by them due to overcrowding.

One possibility Metro previously discussed is a rush hour route that focuses on the morning problem strip: Columbia Road to downtown DC. But one obstacle is layover space — a bus route requires a location for the bus drivers to park, pause, and get ready for an on-time departure.

Wednesday’s meeting will begin at 7 pm and is open to the public.

How long are you waiting for the bus? (Luis Gomez Photos)

How long is your wait for the S2 or S4 on 16th Street NW? Residents in the area have been sharing their concerns about the long waits and how full the Metrobuses are (or are not) as they bypass bus stops during their morning commutes.

The routes on the 16th Street bus line have the highest ridership in the DC.

Kishan Putta, Advisory Neighborhood Commissioner for District 2B04, has invited residents of the area to a meeting with  Jim Hamre, director of Bus Planning for Metro today, January 28, at 7:30 pm at the DC Jewish Community Center (16th & Q Streets NW) to discuss this problem and any other transit issues residents may have (14th Street buses, too).

These are excerpts from emails sent by residents to Putta, whose district includes a swath of 16th Street NW:

“Just this week (Tues, Wed, and today, Thurs), it has taken me 45-50 minutes to get from 16th & V to 14th & I, and anywhere from 4 to 6 buses have passed the stop each morning because they are too crowded to accept any more passengers.  (Also, on Tuesday morning, 2 buses that had hardly anyone standing passed us by in the cold).  There are usually 15-20 people waiting at V St in the mornings.  Thanks again for the chance to provide input to Metro.”

“The bus issue is particularly aggravating for me.  The bus stops immediately outside my building and drops me off a block from my office, but it’s completely unusable.  S2/S4 buses are often full and do not stop, but a second issue is that during morning rush hour, it seems like the majority of the buses go to McPherson Square, not Federal Triangle, which does me (and I’d suspect many other commuters) little to no good at all.”

“It’s not fair that people who happen to live farther north are able to catch any bus that arrives, while we get passed by bus after bus – some days my commute is 15 minutes, sometime it’s 40 minutes.”

“Apps like NextBus are useless because even if I track buses and time my walk to catch them, they are usually full and won’t stop.  I often get frustrated by all the buses that refuse to stop that I will just give up and take a cab.”

“Sometimes the buses are so full that they drop people off, but STILL refuse to take new passengers – it’s a really depressing/frustrating/stressful start to my day.”

“I would note that a big part of the problem is that many buses do, in fact, have room but the drivers do not ask people to move back so it looks like they’re full from up front (nothing is more frustrating than watching a half-empty bus speed by or refuse to open its doors).”

Seriously, with this weather you should have been sipping drinks al fresco last night. Because it’s Friday and Mother Nature is feeling really lovey, she’s giving you a do-over with the weather this evening. It’s 70 degrees in February — why don’t you just start your happy hour now?

END_OF_DOCUMENT_TOKEN_TO_BE_REPLACED

The Logan Circle Whole Foods in the 1400 block of P Street NW announced that the renovation and expansion of the 10 year old store which we reported on in June is nearly complete.   There will be an unveiling of the new mezzanine level cafe on October 1. Check out the store calendar for details on the kickoff which includes entertainment, refreshments and giveaways.

If you’ve been to the store in the last few weeks you may have noticed the expansion of the wine department and addition of a bunch of express checkout lanes along the P Street window wall. While I welcome shorter lines at the grocery store, the new checkout system feels a bit like a DMV queue. Plus it eliminates the window side seating which was great for people watching.

Overall the system is working and I think the changes will be a big hit, especially with football season underway and the holidays quickly approaching.

Tunnel… But No Love

The Washington City Paper Housing Complex Blog reported that construction is set to begin in late October on a gigantic 1,165-room Marriott Marquis at the Northwest corner of 9th and Massachusetts NW.

The saga of building of a large hotel in close proximity to the DC Convention Center has dragged on for years, and while the legal battles have ended, not everyone is happy. The estimated 42-month-long construction is sure to disrupt residents and business owners.

Plans call for the hotel to have several restaurants, cafes and a tunnel under 9th Street.  Not good news for cafes and galleries north of the site who had hoped for increased foot traffic. The hotel will also be within the boundaries of the Arts District which is currently undertaking a branding and marketing effort.

Jogger Gets a Lesson in Safe Sex

Interesting Washington Post opinion piece by a female jogger whose run through the portion of Rock Creek Park known as P Street Beach became her introduction to the notorious hookup spot. After finding the area littered with condoms and condom wrappers, the writer contacted various law enforcement agencies for comment. Seems that patrolling of the area is somewhat lax because of jurisdictional issues between US Park Police and DC Police.

From Greater Greater Washington are some details on proposed changes to the 90-92-93 Metrobus lines that run from the Anancostia Station, along U Street NW, through Adams Morgan ending at the Ellington Bridge on Calvert Street. The recommendations by DDOT and WMATA call for the line to instead continue straight on westbound U Street to Florida Avenue NW, then left on Connecticut, continuing south toward Dupont Circle. The proposed change would create a direct bus link from the U Street Corridor to Dupont Circle.

Dcist has more on the September 3 incident in which a Metrobus struck jogger Amanda Mahnke.