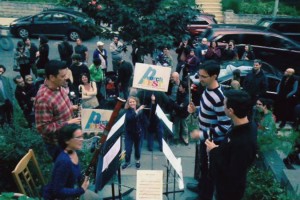 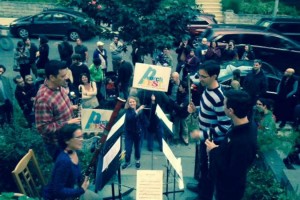 17th and R Streets NW: The Washington Blade held a party at Cobalt Thursday night to celebrate its new online photo archive and store. When completed it will have photos from four decades of coverage of the LGBT movement. (Matty Rhoades)

From Michelle Lancaster. Follow her and tell her your news on Twitter @MichLancaster or email her at [email protected]

The Washington Blade held a party at Cobalt Thursday night to celebrate its new online photo archive and store. The project is still underway with the first phase done. When completed the Blade’s archives will have photos from four decades of coverage of the LGBT movement. You can already view and purchase some photos. Founded in 1969, the Blade’s offices are in the neighborhood on the 1700 block of 14th Street NW.

There’s a Facebook picture going around — it’s a pencil and a cassette tape picture with the text, “Your children will not know why these go together.” It’s enough to make you feel old. Grillfish turning 15 should have a similar effect, but with a tastier payoff. On Monday, October 10, Grillfish will be celebrating their birthday with retro-pricing on most entrees. Hopefully it doesn’t come with a side of the Macarena, but at those prices, a line dance may end up being worth it.

U Street Metro This Weekend

So, it seems that weekend track work may cause some problems for those headed to the bar or shows on U Street. Luckily for you, the The Washington Post has three ways for you to get around the mess that is closing U Street, Shaw and Columbia Heights metro stations for the weekend. Our opinion? Walk from Dupont Circle if the weather is nice, if its not you should take a bus.

What’s Next For DC Cabs?

A new chair of the DC Taxicab Commission recently discussed surcharges at his confirmation hearing. Since a fare hike seems to be on the table, even if it comes with an upgrade in service, area residents have some concerns. Check out the story at The Washington Post; for the resident/rider perspective, check out Jack Jacobson’s group and their Facebook page. For those of you that don’t know, Jack is a local ANC member and a regular taxi cab patron.

The Washington City Paper regularly gets to the heart of DC things you hear about, think it’s interesting and yet know nothing about its origin or history. One of those things is the Sweet Tea Pumpkin Pie Festival, and  City Paper does one hell of a job getting into the head of its creator, Dave Mann. He’s putting on a show (or 125+ shows) again this weekend, and if you don’t want to go after reading Jonathan’s article, well, I give up.

You Didn’t Miss It, It is Real: Steve Jobs Did Die

The visionary that created the iPhone, iTunes, the personal computer and spawned an empire of Apple devotees passed away on Wednesday of cancer. Cancer sucks, but you know what doesn’t suck, not even a little bit? His commencement speech at Stanford in 2005. Too often, sincerity is mistook for glibness or gladhandling, and this speech is a bit of uncommon wisdom from an uncommon man. It is also clearly a man trying to explain his life and make sense of it all to lay down a legacy, but it is his enthusiasm and frankness that stand out, particularly from a private man running a very public company.