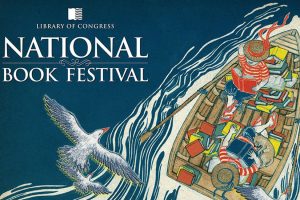 Each year, the National Book Festival brings hundreds of authors and thousands of literature lovers to the Walter E. Washington Convention Center (801 Mt Vernon Place NW) for a free celebration of books.

Organizers are scheduled to throw open the doors to this year’s event Saturday at 8:30 a.m. From 9 a.m. until 10 p.m., attendees are free to wander the convention center in search of fun activities and booths manned by their favorite authors.

Author Stephen King, writer and former basketball star Kareem Abdul-Jabbar and famed Washington Post journalist Bob Woodward are just some of the celebrity guests that will attend this year’s event.

Not sure what you should do and see this year? Here are a few highlights:

Of course, these are just a few more than 120 appearances and signings planned. Attendees can formulate their game plan by checking out the festival’s map or downloading its app.

Learn more about the festival in the press release below: