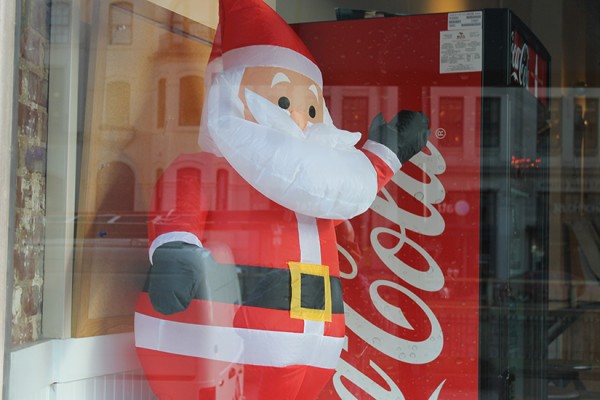 Thanksgiving is in two days, but the holiday season is basically here already.

Businesses are already airing out the jingle-jangly holiday playlists. Multicolored tinsel and oddly placed red bows are appearing on light poles. Everything tastes like peppermint now. The annual War On Christmas™ debate will soon reach its feverish climax.

Shaw gets a tree-lighting ceremony this Saturday and Columbia Heights has one next week. The zoo will light up on Friday. Snowy holiday window displays are popping up across the city. Holiday-themed improv shows and markets are coming together. Ice rinks are opening.

For some, this is the most wonderful time of the year. For others, it’s a saccharine capitalist drum beat of buy, eat, celebrate.

What do you think? Let us know in the poll below. And if you feel strongly either way, please yell at us in the comments.

The National Christmas Tree Lighting ceremony will take place tonight, Thursday, December ,6 from 4:15 until 7 pm on the Ellipse near the White House.

The ceremony will be hosted by Neil Patrick Harris and will include performances by Colbie Caillat, The Fray, Jason Mraz, James Taylor and more.

Unfortunately, the annual celebration does come with some rush hour road closures and alternate traffic patterns.

Starting at approximately 4:15 pm, no traffic will be allowed northbound or southbound on the following streets:

Miss Pixie’s Furnishings and Whatnot at 1626 14th Street NW. Yes, her pink Christmas Tree is up, too. (Luis Gomez Photos)

From Mike Kohn. Got some news for Mike? Find him on Twitter @mike_kohn or drop him a line at [email protected].

November 30 Update and Correction: “Black Cat Bill” is very much alive. The Washington City Paper‘s Ryan Little even paid a visit to William “Willy” Turner. Our original story is below. We regret that our information was incorrect — apologies all around, including to Mr. Turner. – The editors

We Love DC shared the sad news that Black Cat Bill . They said it best, Bill, “the unofficial doorman for the Black Cat on 14th Street NW… is an institution… for years and years, panhandling in front of the rock club, his signature call of ‘Black Cat, Black Cat, how bout a little change for the homeless,’ is familiar to anyone who ever caught a show at the Cat.”

The first sign of the impending winter holidays (which looks a lot closer on this side of Thanksgiving) is here! The National Christmas Tree is up, according to the National Park Service. This year’s tree replaces a previous Colorado blue spruce that was replanted on the Ellipse after the previous tree was damaged by a wind storm in February of this year. The lighting of the tree will take place on December 1 from 5 to 6 pm, and the Pathway, featuring trees to represent US states and territories, will run from December 6 to 23, daily from 11 am to 11 pm.

This year, the Guardian Angels were out in force, protecting citizens during the craziness that is Black Friday, according to Washington City Paper. Not only did they hand out safety tips, but they also escorted patrons from stores to cars and public transportation and identifying criminals in action, sometimes making citizens’ arrests! We’ll all look forward to seeing the stats from this year’s holiday season. An early thank you to anyone who participated!

Happy Presidents’ Day (or Washington’s Birthday, as Wikipedia refers to it)! Hopefully you’re reading The Weekend Roundup from the comfort of your own home as the federal government has declared this to be a holiday. Be nice to the Borderstanis who were not fortunate enough to get a day off to celebrate our country’s leaders.

Yes, it’s relatively far away from Borderstan, but we felt like it was newsworthy enough to bring out. State Senator James C. Rosapepe said that he would support legislation in favor of same-sex marriage when a vote comes to the Maryland Senate next week. Gov. Martin O’Malley has said he would sign off on the bill, if approved. Opponents could then petition for a referendum to overturn it, which would give voters the final say. The Baltimore Sun has the full story.