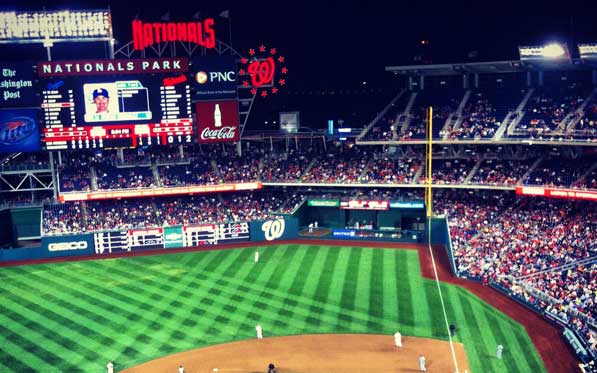 Ward 1 D.C. Councilmember Brianne Nadeau is seeking volunteers to join her in escorting senior citizens to and from Nationals Park for a baseball game next Tuesday, July 7.

All volunteers will receive a free ticket to the 7:05 p.m. game, during which the Nationals will face off against the Cincinnati Reds.

Volunteers will meet at the Columbia Heights Civic Plaza at the corner of of 14th Street and Park Road NW  for a quick orientation at 5:00pm before heading to the Georgia Avenue, Columbia Heights, U Street or Shaw Metro stations to pick up a senior.

“We’re telling seniors that they can come to any of those Metro stops,” says Tom Fazzini, spokesperson for Nadeau’s office. “They will be able to meet a volunteer of ours there, and then the volunteer will escort them to the ballpark.”

After the game is over, volunteers will lead the seniors back home.

Nadeau’s office is urging those who want to volunteer or seniors who want to attend the game to sign up online.

Instagram picture of The Nats Stadium by Willis Shawver

The basic necessities of life: food, shelter, clothing, and… Wi-Fi?

Before you roll your eyes, think back to the last time the Wi-Fi in your apartment stopped working. How about that time you visited your Aunt who still has dial-up? Gives me the chills just thinking about it.

Alright, so maybe Wi-Fi isn’t a basic necessity but it has become a service our society is increasingly dependent upon. Whether you’re at the corner coffee shop or your Aunt’s house, our modern-day world demands accessible and dependable Wi-Fi. Even at sporting events.

As reported by the Examiner, the Washington Nationals announced this week that they are investing in a major upgrade to their ballpark Wi-Fi services. Nationals Park has offered Wi-Fi access to fans since the stadium opened in 2008, but increased demand on bandwidth has left the current Wi-Fi service unable to keep up.

This increased Wi-Fi capacity will allow the Nationals to offer fans premium services like the ability to order concessions from their wireless devices. Fans could also check out in-game promotions, access exclusive Nationals videos, or get up-to-the-minute game statistics.

You’ll no longer have to flag down a vendor to order your $8 dollar beer. No more waiting in a long line for your overpriced nachos. With a few swipes of your finger, that cold beer and nachos can be all yours. No human contact involved!

How does the song go?

“Take me out to the ball game,

Take me out with my phone.

I don’t care if I never get back,

For it’s one, two, thr-… wait sorry, you have to see this Instagram I just took.”

Admittedly, there is a certain amount of frustration when you’re trying to use your smartphone in large stadiums. But is it really a bad thing to have unreliable internet service at sporting events? You might actually be forced to… you know… watch the game. Or even (shutter) talk to the person sitting beside you.

Next time you’re out in the neighborhood and in need of Wi-Fi access, use this interactive map to find free hotspots. There are also plenty of smartphone apps on the market to help you get your Wi-Fi fix.

The Diamond Box at Nats Park: The perfect place to watch the baseball game. (Scott Leibowitz)

Over the years I have been fortunate to have the opportunity and privilege to attend many live sporting events, especially baseball.  While ticket prices for games have steadily risen over the years, most stadiums keep their worst seats at an affordable rate for the regular folk and make attending a game an easy decision. Sure, there are field level, luxury box and, probably, deluxe seats I have never heard of but these concepts have always been pipe dreams for me… until last weekend.

Thanks to my amazing girlfriend and her company’s bank, we were given two tickets to last Saturday’s Mets-Nationals game in a PNC Diamond Club Box. Now maybe some of ya’ll have enjoyed this section of Nationals Park before, but it was a first for both of us and we both agreed, it was the best professional baseball game we had ever attended.

On the tickets it said there would be free food and drinks, so we had expectations for some goodies. But when we walked into the giant suite behind home plate, we were amazed at our discovery. The moment we stepped in, we were given disposable wristbands and were whisked into the 1%’s world of luxury and indulgence. Here are some of the highlights.

Food, The Glorious Free Food. This was like being at the cocktail hour of an A-List wedding. Food stations with fresh cut meat, a candy table with recently popped pop corn, and a hot dog making station with all the trimmings were waiting for us. If there hadn’t been TVs showing the game, I would have totally forgotten that there was one on and that that was why I came. On top of all this, the bar was open, wide open. I got my fill of draft Sam Summer and was a very happy spectator.

Waiter Service. Now, I have seen some sections where you have the option of ordering. In the PNC section, there is an army of stadium workers going back and forth with just about anything you want (for free of course), and this is included in the great open bar. When I wanted a hot dog and a beer in the 2nd inning, I certainly didn’t get up. I just ordered it and by the next inning, it was there.

The Crowd. As you can imagine, this whole experience made me a bit like a child in a candy shop as I enjoyed all the perks with a big smile on my face — not the style of a seasoned rich person. I can’t imagine these seats are owned by individuals but rather corporations who give them out often. The two Romney voters next to us were unimpressed by my excitement and wonder, and spent most of the game yelling at people in their view and talking about workout routines. Friendlier people sit in the upper-deck bleachers.

The actual seats were amazing, we saw the whole field and the pitcher before he throws. At the end of the game, the servers were walking around throwing bars of ice cream to everyone; it was grand! To top that, after the game there was a free Third Eye Blind concert at 2nd base which was pretty okay (let’s be honest, they aren’t the Beatles and only have three songs you remember, but those three songs sounded great). I am not sure if I will be able to enjoy normal seats at a game ever again after being spoiled like this.

FOOTBALL. Done with two of my four4 fantasy league drafts so far. Next week, we are talking football.

"Ball Game" is by Jen Morrissey from the Borderstan flickr pool.

Today’s photo, “Ball Game” was Jen Morrissey at the Nationals Park on May 3.

The Washington Nationals have played at Nationals Park since opening day in 2008. Prior to that, they played at RFK Stadium for three seasons. Located at 1500 South Capitol Street SE, it seats 41,000 fans. (Scott Liebowitz)

What is the best way to measure one U.S. city against another? Is it public transportation, homegrown culture, or nightlife? While sure these things are important, I’d venture to say that some of this country’s best cities are the ones home to great baseball teams. Thus, based on that gauge, D.C. is… well… pending a championship run, doomed for a life of “just okay.”

Let’s take a few steps back. D.C.’s last baseball team, the old Washington Senators, were so bad that their unofficial tag line was, “Washington Senators: First in War, First in Peace, and last in the American League.” (In 1960, the Senators moved to Minnesota where they currently have die-hard fans.) Where do the Nats come in? After years of nothing but Redskins football, in 2004, D.C. began an aggressive anti-Canadian campaign and stole the Montreal Expos  in the middle of the night (kidding, the league helped too). Baseball returned to the nation’s capital and here we are today.

END_OF_DOCUMENT_TOKEN_TO_BE_REPLACED

Ristorante Posto at 1515 14th Street, NW opened in December 2008 and is still a novelty in the area. They serve classic and modern Italian dishes, wood oven pizzas and focaccia. Its prices are in the upper mid range.

Cafe Saint-EX crowns the southeast side corner of 14th and T Streets NW. It is one of the pioneer businesses of its kind in Borderstan on 14th Street. They offer a delicious mix of American-Bistro style cuisine… always a good alternative in the area.

“Spring Awakening” is playing at the Kennedy Center, 2700 F Street NW. It opens in DC after receiving eight Tony Awards. Duncan Sheik and Steven Sater created the music, keeping most of the original dialogue, but creating a contemporary score.

“Dark Play or Stories for Boys” by Carlos Murillo premieres at DC’s Forum Theatre at 1365 H Street NE… with a plot about teenage loneliness in today’s world.