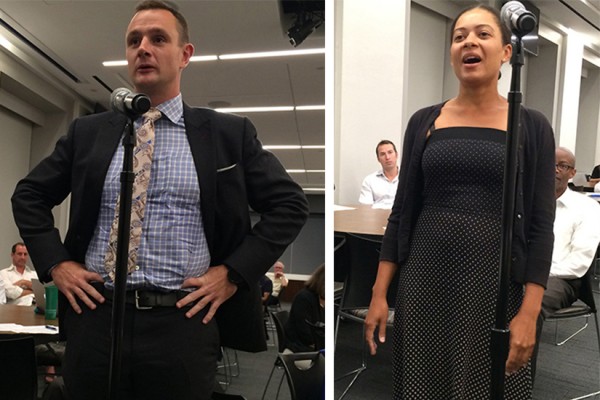 Expansion at 1451 S Street NW does not require zoning approval or variance of any kind. (Luis Gomez Photos)

ANC 2B voted unanimously at its monthly meeting on Wednesday, June 12, to ask DC’s Historic Preservation Review Board (HPRB) to delay consideration of the project until its July meeting, a one-month delay. This reverses the recommendation to green-light the project made the previous week by ANC 2B’s Zoning, Preservation and Development (ZPD) Committee.

The project does not require zoning approval or variance of any kind.

Trout Design Studio presented letters of support from neighbors at 1435 and 1461 S Street. They also presented a letter of support from 1515 Caroline Street. This address, Trout Design Studio claimed, abutted the house from the rear. However, ANC Commissioners pointed out the abutting house to the rear actually fronts onto Swann Street. Caroline Street is one block north and one block west, across 15th Street.

The residents of the abutting house to the west appeared before the committee. “Things have not gone well,” one of them said.

The first meeting with the architects concerning the expansion had only occurred the previous Sunday, he said. The neighbor said he was concerned about how the expansion would change the block.

“This will be replicated on every house,” he said.

It was also reported that Trout Design Studio had tried and failed the previous evening to obtain an endorsement for the project from Dupont Circle Conservancy. The Conservancy does not normally provide official rationales for its decisions. A representative of the Conservancy explained the Conservancy was concerned because the expansion resembled ones they had seen that eventually became multi-residence condominiums.

In the light of this new information, Commissioner Noah Smith, 2B-09, withdrew his original motion to endorse the expansion, and the ANC instead requested a one-month delay to get more input from the neighbors.

The area of the proposed liquor license moratorium for the 14th and U area.

The ANC 2B/Dupont liquor licensing affairs subcommittee will host a listening session Wednesday evening, April 17, on the proposed U Street liquor license moratorium. The location of the forum is the Chastleton Cooperative Ballroom, 1701 16th Street NW. Time is 7 to 9 pm.

It  will be an additional opportunity for commissioners to hear community opinion from 2B residents before the full ANC votes on the moratorium at its next meeting on May 8. The subcommittee will formulate a recommendation to the full ANC after this listening session.

The session is scheduled from 7 to 9 pm at the Chastleton Cooperative Ballroom, 1701 16th Street NW. The website of Commissioner Noah Smith, 2B-09, has more information.

Of the four ANCs within the proposed moratorium zone, three have already voted against it. DC’s Alcoholic Beverage Board is currently soliciting direct public comment in writing and inviting the public to testify at a hearing on May 22.

ANC 2B encompasses the Dupont Circle neighborhood. District 09 is in the northeast corner of the ANC, running to the southwest corner of 14th and U NW. (ANC 2B website, boundaries that are in effect for 2012 election)

The deadline for filing to run in the race for an Advisory Neighborhood Commission (ANC) seat is rapidly approaching, and this past weekend, one local resident announced his candidacy for the 2B-09 seat in Dupont Circle.

Noah Smith, who currently serves as a public safety liaison for ANC 2B, is running in the local election for the first time. Ramon Estrada, the five-term ANC incumbent for seat 2B-09, has not confirmed his plans to run in the November 6 election; he had not picked up nominating petitions as of Monday.

Smith, who describes himself as having “a passion for public service,” believes that one of the most important roles of an ANC Commissioner is to be an advocate for residents when dealing with the DC government.

“I hope to serve as a liaison between the alphabet soup of government agencies and my neighbors to bring critical information to our community faster and to help address concerns sooner,” said Smith, who has lived in DC for seven years and in the Dupont neighborhood for a year-and-a-half.

Smith is a volunteer EMT and a Federal highway safety official, and hopes to bring his experience in public safety to neighborhood government.

Noah Smith is running for ANC 2B-09 in this year’s election. (Photo courtesy of Noah Smith)

“I am running for ANC to build on my past work to improve the safety of our neighborhood’s roads, including for pedestrians and bicyclists, and to foster a collaborative approach to problem solving,” said Smith.

Smith is also campaigning on neighborhood development, promising to balance the (often times) delicate relationships between neighbors and businesses and work to find collaborative solutions that meet the needs of the community.

The deadline for filing to run for an ANC seat is Wednesday, August 8. Elections for ANC positions are on the November 6 ballot and are non-partisan. 300 seats throughout the city are up for reelection this year. Commissioners elected into the ANC will serve for two years.