The Nuclear Security Summit will be in town Thursday and Friday, and it might bring with it a mess for commuters.

END_OF_DOCUMENT_TOKEN_TO_BE_REPLACED 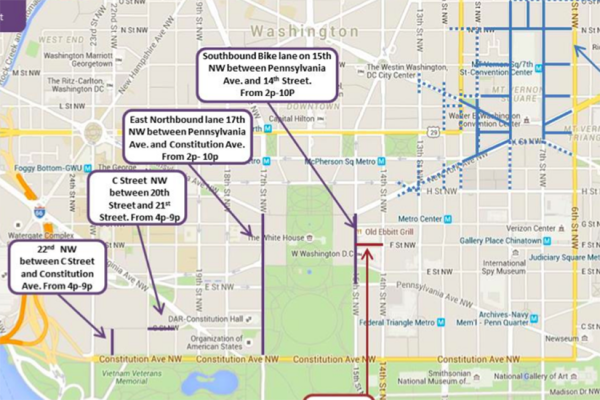 D.C. risks having a downtown traffic meltdown when the Nuclear Security Summit rolls into town next week.

International heads of state and government officials will convene at the Walter E. Washington Convention Center between March 31 and April 1 for the fourth and final Nuclear Security Summit, according to the White House.

Street closures around the White House and the Convention Center begin to take effect on March 29 and last until April 2. Additionally, the Mt. Vernon Square Metro stop will be closed between March 30 and April 1.

“The closure is necessary because Mt Vernon Square Station falls within the secure perimeter for the summit, a designated National Special Security Event that is expected to bring together heads of state from dozens of countries,” Metro writes in a press release.

END_OF_DOCUMENT_TOKEN_TO_BE_REPLACED

The International Nuclear Security Summit begins this morning and runs into Wednesday at the DC Convention Center. Extremely tight security measures and many travel restrictions have been in place since last night for sections of the city, especially the area around the Convention Center. President Obama is hosting the event and attending heads of state include Germany, France, Russia, China, India, Pakistan and Brazil. (Is Carla Bruni coming to town again?)

You can read the full list of measures put into place by the city, Homeland Security and other federal agencies. Remember that foot traffic is affected in addition to street traffic, which includes buses; you will not be able to walk through certain areas. Check the list before setting out for work.

With dozens of heads of state in town, it is a good bet that traffic will be affected in adjacent areas of the city as VIPs travel between their respective embassies and the Convention Center.

To find out what is going on in the city in terms of traffic problems, street closures and other issues, get alerts with Alert DC, which you can receive via email and cell phone. You can sign up online.

Another good option is to get updates from the DC Department of Transportation on Twitter (@DDOTDC) or DDoT‘s Facebook Page.

In addition, Department of Public Works is suspending street cleaning in a large area around the Convention Center, all the way west to 15th Street NW and north to Florida Avenue NW:

April 12-13: The International Nuclear Security Summit at the DC Convention Center on Monday and Tuesday will mean tight security plus numerous restrictions for residents and road closures and reroutings. (Luis Gomez Photos)

The International Nuclear Security Summit next Monday and Tuesday at the DC Convention Center will mean extremely tight security and many travel restrictions for the city, especially the area around the Convention Center. President Obama is hosting the event, which is designed “to enhance international cooperation in preventing nuclear terrorism, a danger he has identified as the most immediate and extreme threat to global security.” According to America.gov, the “Focus will be on keeping nuclear materials out of terrorists’ hands.”

The city, in conjunction with federal agencies, is putting the tight security measures into effect in the area around the Convention Center. There were undoubtedly be spillover from all the street closures, parking restrictions and bus line reroutings into the Borderstan area, particularly to the east and south; parts of 7th, 8th, 9th, 10th and O Streets NW will be closed. There are also parking restrictions in place for addtional streets, including a stretch of Rhode Island Avenue NW east of Logan Circle (see the list below the fold).

Road closures begin at 8 p.m. on Sunday while parking restrictions begin an hour earlier. According to information from Alert DC, “Pedestrian traffic inside the restricted areas will be limited to residents and owners/employees of local businesses that fall within the secure area. Government issued photo identification, such as a driver’s license, non-driver photo ID or passport will be required to gain access.”

The DC Department of Transportation (DDoT) has established a special email address for residents and commuters to get information about detours and restrictions related to the Nuclear Security Summit:

In an effort to further assist with traffic plans and detours, DDOT has established an e-mail address where the public can send questions, concerns, complaints or complements.  The e-mail address is [email protected]. The e-mail will be monitored during hours in which the DDOT Command Center is operational which are Monday, April 12 and Tuesday, April 13 between 6 a.m. and 10 p.m. and Wednesday, April 14 between 6 a.m. and 2 p.m.  Any e-mails received outside of these hours will be answered once the center reopens.  The e-mail is specific to this event and will be disabled at 2:30 p.m. on April 14.  DDOT encourages anyone who needs additional information to send in their requests.

Below the fold is a comprehensive list of restrictions, closures and information from DC Alerts.