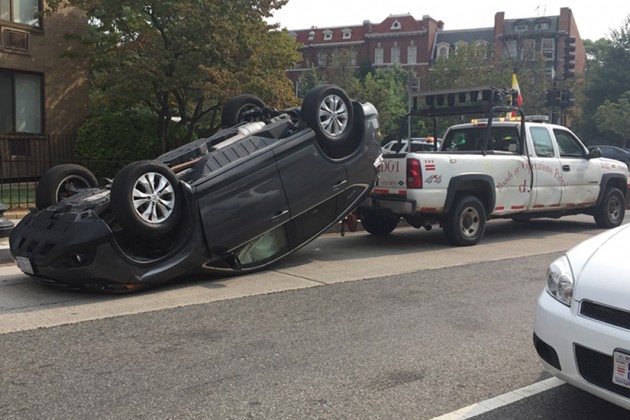 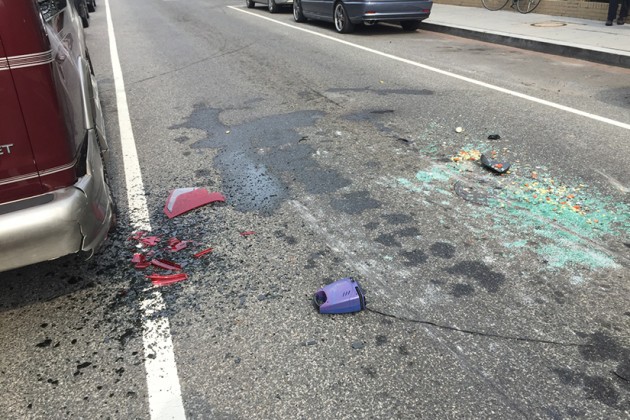 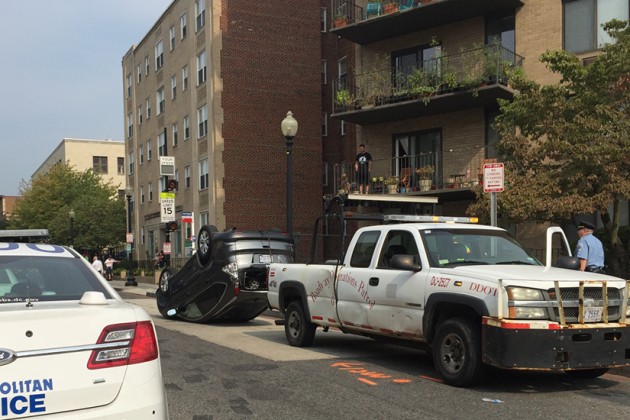 A woman was seriously injured after a car she was driving flipped over near the intersection of 16th Street and Park Road NW around 9:30 a.m., say D.C. Fire and EMS officials.

Witness Manuel Ramirez says the driver plowed into a lamp post before the car flipped and struck several vehicles, including his.

“I saw the car come flying down the road,” Ramirez said. “She hit a lamp post across the street, and I don’t know if the curb made the car flip, but she hit three cars, and stopped when she hit mine. I usually have my 10 month old son with me, but thank goodness I didn’t today.”

Police closed the 1600 block of Park Road NW to clear the scene.

D.C. Police are seeking a man they say sexually assaulted a woman while holding her at gunpoint early yesterday morning.

According to police, a woman was approached by a man on the 600 block of Park Road NW around 6:00 a.m. on Sunday. The man then sexually assaulted the woman at gunpoint, say police. The suspect was armed with a black handgun.

The suspect is described as being a Black man in his twenties, about 5’5” or 5’6”, “medium complexion” and muscular.  Police add that the suspect was wearing a blue and white plaid shirt, blue jeans, a blue or purple in color hat and black sunglasses.

Anyone who has information regarding this case should call police at 202-727-9099.  Additionally, information may be submitted to the TEXT TIP LINE by text messaging 50411.

DC Crime Solvers currently offers a reward of up to $1,000 to anyone who provides information that leads to the arrest and conviction of the person or persons responsible for an assault committed in the District of Columbia.

Police have arrested a man they say was caught red-handed by the owner of the Columbia Heights residence he was burglarizing.

Kevin W. Jones is suspected of entering a home on the 1100 block of Park Road NW through an unlocked window on July 16 around 11:21 p.m.

According to the police report, Jones allegedly climbed through the window and was immediately spotted by someone inside the residence. When the homeowner said he was calling the police, authorities say Jones then exited the home through the same window.

Jones was arrested in connection with the burglary on the 1100 block of Park Road NW yesterday around 8:10 p.m.