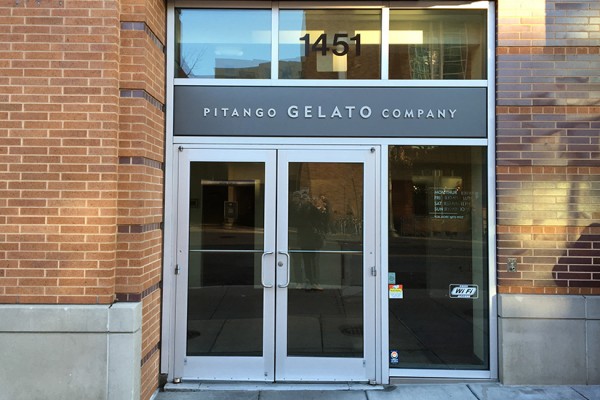 It may have cooled in recent weeks, but that’s no reason to forsake the refreshing goodness of an iced coffee. And here in Borderstan, few do it as well as the folks at Pitango Gelato, the Italian-style gelato shop in Logan Circle (1451 P Street NW) where baristas serve up hand poured iced coffee using the Japanese method. But don’t mistake it for a culture clash — the Japanese method iced coffee is a perfect complement to Pitango’s Italian gelato and espresso service.

…and for that we say, domo arigato.

I caught up with Pitango’s coffee manager, Luke Albao, to gain insight into what makes their iced coffee so delectable. He says the Japanese method stands out from alternatives like batch brewing and cold brew concentrates, the latter of which requires coffee to be fully immersed in room-temperature water for many hours. Albao says cold brewing masks the brightness found in Japanese method iced coffee.

“When it comes to iced coffee, there’s only one way to get a bright and aromatic drink that could be considered refreshing, and that is to brew it hot,” says Albao. “Heat is necessary to bring out the full complexity of a specialty coffee. Most cold-brewed coffee I’ve had is fairly monochromatic tasting, without any of the sparkle you might expect from a specialty coffee, so you feel you need to reach for the milk and sugar.”

The coffee Pitango uses is currently Haru, an Ethiopian blend from Counter Culture Coffee. Albao is a big fan of the Haru, particularly as an iced coffee, which he says highlights the best qualities of this coffee.

“The Haru is wonderfully aromatic, even when iced. Its flavor has a honey-like sweetness to it with citrusy high notes,” says Albao. “But to me, what is particularly special about this coffee is its delicate floral characteristics. Coffee blossoms smell a lot like jasmine. I find that it’s a bit like mint or tea in the sense that has a cooling effect on your palette.”

To get a better idea of how the Japanese method differs from conventional brewing, think about a typical electric brewer. These brewers flood the coffee grounds with water and allows the brewed coffee to drip down into a carafe or thermal pot. That brewing method doesn’t allow for much control of elements like rate of saturation, or perfectly distributed water over the coffee grounds.

By contrast, using specialized brewing equipment and proper pouring technique allow the baristas at Pitango to pour a thin stream of water steadily and with great precision to unlock subtle nuance in the coffee’s flavor. Pitango brews iced coffee with a glass brewer called a Chemex, which uses a special bonded filter to bring out delicate flavors in coffee.

The recipe, so to speak, is as follows:

Pitango brews iced coffee throughout the day, so the coffee you’ll enjoy is never older than a couple of hours. Want to learn more? Stop by the P Street location, open weekdays at 10:30 a.m., and 8 a.m. on the weekend. And, if you venture outside of Borderstan, the same iced coffee can be found at Pitango’s Penn Quarter store.

A Pitango Gelato shop will “open soon” at 1451 P Street NW in the Metropole building. (Photo: Luis Gomez, One Photograph A Day.)

Luis saw this sign today… a gelato shop, Pitango Gelato,  is coming “soon” to Borderstan in the Metropole building at 1451 P Street NW. The company is based in Baltimore and has multiple locations.