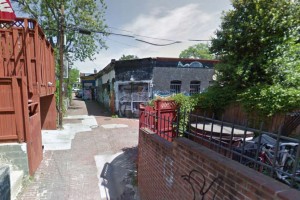 (Updated at 3:50 Friday) A Columbia Heights alleyway could soon be named in honor of a Pleasant Plains community leader and African-American trailblazer.

According to a statement released today by Nadeau’s office, Williams, who lived in Pleasant Plains before his death in the 1960s, was the first African-American to work for the CDC and worked to promote integrated basketball and softball leagues in the District. He and his family were also prominent community leaders in Pleasant Plains.

Naming the alley would also allow developers to move forward with a proposal to turn an unused building that borders the alley into a three-lot, two-story building with condos, and art and office space. Development company Seven Five Three Development has sought to develop the building, which does not border a street, for several years. The alley needs to have an official name for the company to build a multi-unit building inside the block.

Seven Five Three has agreed to provide alley lighting and additional traffic signs as part of its development plans, the press release reads.

“Mr. Williams is remembered fondly by the Pleasant Plains community for both his personal accomplishments and his work to knit the community together,” Nadeau said in the release. “At the same time, this bill will help move a project forward that will add lighting and other amenities to the alley and surrounding property.”

A man has been arrested and charged with second-degree murder in connection with a deadly fight that occurred in Pleasant Plains last weekend.

D.C. Police announced this afternoon that 24-year-old Milkiyas Bayisa of Adelphi, Md., was arrested and charged with second-degree murder for allegedly killing 35 year-old Kassahun Abebe Edo of Irving, Texas, during a fight.

Police responded to a report of a fight on the 700 block of Fairmont Street NW on Aug. 22 at approximately 3:00 a.m. When officers arrived, they found Edo on the ground and unconscious.

Police say that during the fight, Edo was assaulted, fell to the ground and hit his head on the curb.

Though Edo was transported from the scene to a hospital, he died the next day.

A man was killed during a fight that occurred near Pleasant Plains last weekend, say D.C. Police.

Police responded to a report of a fight on the 700 block of Fairmont Street NW on Saturday at approximately 3:00 am.  When officers arrived, they found 35 year-old Kassahun Abebe Edo of Irving, Texas, on the ground and unconscious.

Police say that during the fight, Edo was assaulted, fell to the ground and hit his head on the curb.

Edo was transported from the scene to a hospital, where he died on Sunday.

The Metropolitan Police Department currently offers a reward of up to $25,000 to anyone that provides information which leads to the arrest and conviction of the person or persons responsible for any homicide committed in the District of Columbia. Anyone with information about this case is asked to call the police at (202) 727-9099.

Additionally, anonymous information may be submitted to the department’s TEXT TIP LINE by text messaging 50411.