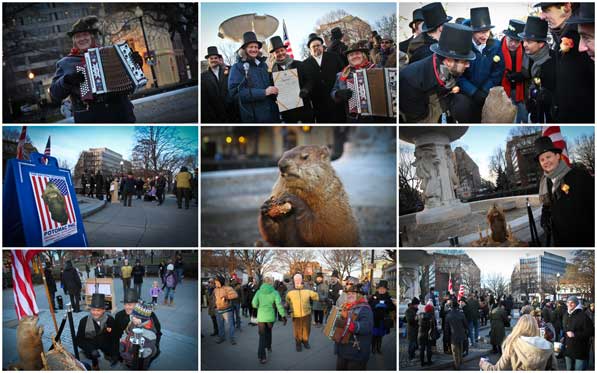 Early this morning in Dupont Circle, “Potomac Phil” the [stuffed] groundhog declared that DC would have an early spring and that there will be “six more weeks/months of political gridlock.” It was the second annual event, which is organized by Dupont Festival; Groundhog Day always falls on February 2.

Councilmember Jack Evans (D-Ward 2) was in charge of providing the interpretation of “Phil’s remarks” to the crowd that had gathered early in 18-degree weather. Also on hand were Advisory Neighborhood Commissioners from 2B: Chair Will Stephens (2B08), Kevin O’Connor (2B02), Kishan Putta (2B04), Mike Silverstein (2B06), Stephanie Maltz (2B03) and Noah Smith (2B09). (No sign of Bill Murray or Andie MacDowell.)

Organizer Aaron DeNu tried to procure a live groundhog last year, but most of them are hibernating for the winter, so the stand-in stuffed version made a repeat visit to Dupont Circle.

The proclamation of early spring and more political gridlock followed accordion performances of polkas, including one written specially for the event, by Accordionist Silvia Ebberly. Michael Seneco, the presiding bishop of the North American Old Catholic Church, gave the Groundhog Day blessing.

Groundhog Day is celebrated in the United States and Canada and, as Wikipedia notes, the largest “celebration is held in Punxsutawney, Pennsylvania,” with Punxsutawney Phil the Groundhog.