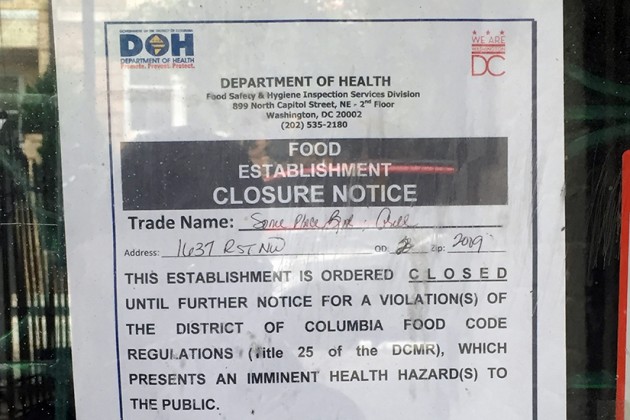 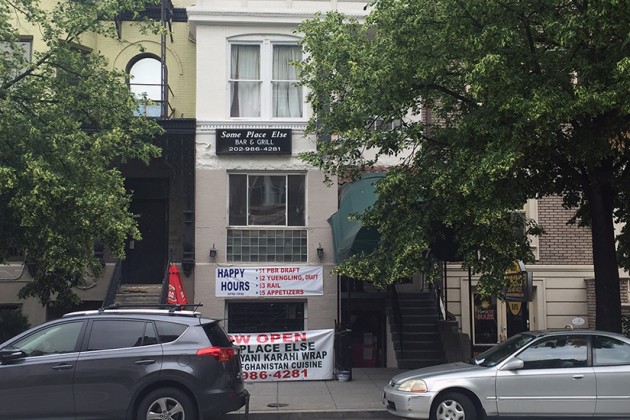 A D.C. food safety and hygiene inspector closed a bar and eatery in Dupont Circle Tuesday afternoon after finding that the business was “operating a food establishment with gross insanitary occurrence or condition that may endanger public health including but not limited to heavy infestation of vermin.”

Some Place Else, the bar located in the former Townhouse Tavern space at 1637 R St. NW, can’t serve locals “until further notice” because it “presents an imminent health hazard(s) to the public,” according to a notice from the D.C. Department of Health.

The agency didn’t immediately provide any further details about the closure.

“There were no pests,” said Some Place Else manager John Hall when reached for comment last night. Hall added that he thought the closure may have stemmed from an alleged dispute between some of the bar’s employees and neighboring business Body Rays Tanning.

But Michael Facciolo, the owner of Body Rays, said he had “no idea where this came from” in an email to Borderstan earlier today.

Full DOH reports on restaurant closures are typically released within a few days to a week of an inspection. 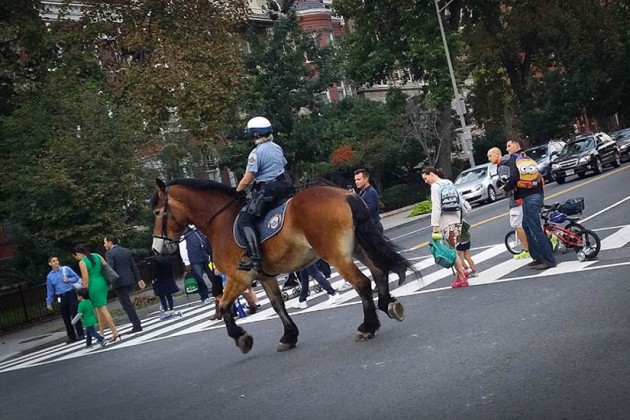 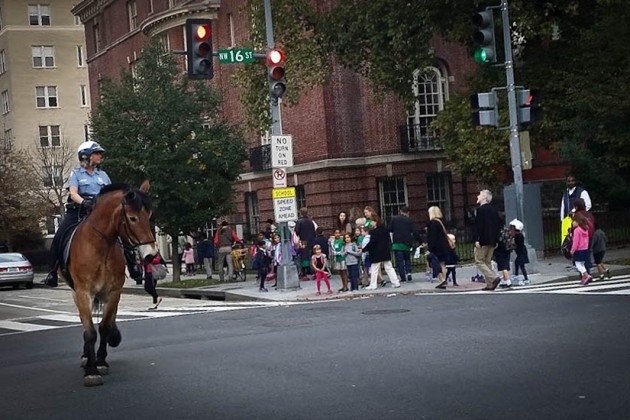 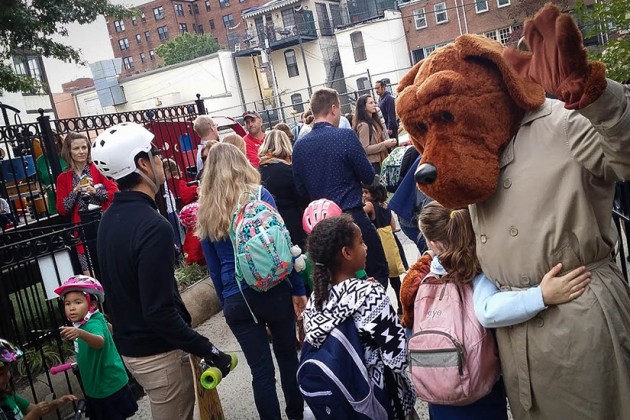 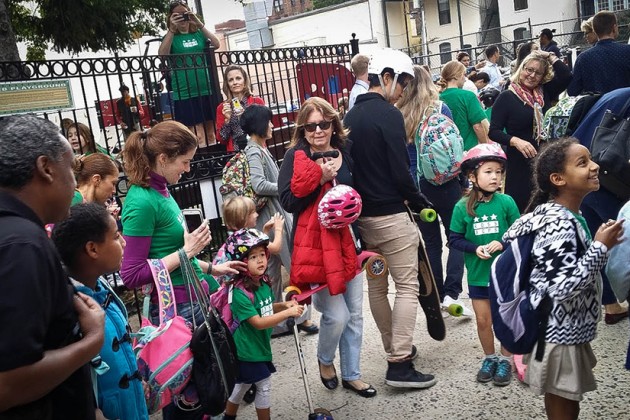 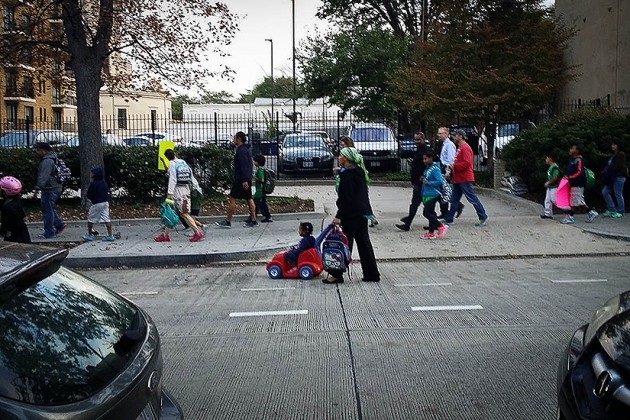 The school’s PTA organized the event for Walk and Bike to School Day, an annual occurrence that prompts students across the U.S. to do exactly that.

From 8-8:40 a.m., police on horseback watched over the students as they walked, biked, skateboarded and scooted to school. And the event even attracted a celebrity: Police mascot McGruff the Crime Dog made an appearance and doled out hugs.

Robbers surrounded three of the victims and repeatedly struck them until they surrendered their property, police said. Authorities could not disclosure whether the juvenile was one of three injured.

In a video released by police, a man is forcefully beaten on the ground as he clenched onto a bicycle. A group of men surround the victim as his attacker jumps on his body and kicks his head.

Police believe the video footage is directly related to the robbery on July 11.

At this time, police have not identified or arrested any suspects .

A suspicious car on the 1700 block of R Street NW on Monday afternoon. (Anna Carr and Luis Gomez Photos)

Yesterday at around 3 pm R Street was closed to traffic for several hours by DC Police from 16th Street to New Hampshire Avenue. A suspicious vehicle, a black Honda Civic, was parked across from Ross Elementary School on the 1700 block of R Street NW.

The man believed to be the driver was taken by the police in custody after they saw what appeared to be propane canisters inside the car. Police evacuated several buildings, including Ross Elementary School as a precaution.

The Honda Civic had stickers that read “Death to Capitalism.”

NBC-4 has more details and reported that “No hazardous materials were found in the car, according to D.C. police. The Secret Service is at the scene and may take over the investigation, D.C. police said.”

DC Police reported a robbery with the use of force and violence at 3:25 am, Sunday, January 20, on the 1600 block of R Street NW — just off the 17th Street business corridor. The lookout is for one man, according to the DC Police Twitter feed and Police Alert.

October 3 is the annual Walk to School Day at Ross Elementary School. There will be no left-side parking on R Street NW (between 17th Street NW and the main entrance of Ross) from 8 to 9 am on Wednesday morning.

Walk to School Day is an international effort organized by the Partnership for a Walkable America to promote health, sustainability and the need for more walkable communities.

"From Above" is by anokarina from the Borderstan flickr pool.

Today’s photo, “From Above” was taken by anokarina on May 20 on R Street NW.

“January Flowers on R Street NW” is by mattyillini from the Borderstan flickr pool.

Friday night was the Studio Gallery opening of “The Magic of the Melting Pot: Immigration-in-America.” Click above for the slide show. (Cecile Oreste)

Studio Gallery in Dupont Circle hosted an opening reception Friday night for “The Magic of the Melting Pot: Immigration in America.”

The new art exhibit runs until January 29. In addition, the gallery will host an author talk with Steve Roberts on January 12 at 7 pm, as well as artist panels on January 19 and January 20 at 7 pm. For more information about the exhibition, visit Studio Gallery’s website. The gallery is at 2108 R Street NW.

From Police Service Area (PSA) 208: “Robbery/Force and Violence which occurred on Saturday, June 6, 2009, at 5:00 a.m. in the 2100 block of N St. N.W. was reported to the MPD. The victim reported that while walking on the sidewalk he was approached by a 3 suspects who engage the victim in a verbal altercation. All 3 suspects then punched the victim in the face, knocking him to the ground. They then kicked him about the face and stole his book bag from his shoulder. They were last seen traveling in an auto southbound on 21st St. N.W. Stolen were personal items and $20 U.S. Currency. The first suspect is described as a White Male, 22-26 YOA, 5’0″, 160 lbs. The second and third suspect lookout matched that of the first suspect. The vehicle they were last seen in is described as a black, two-door Honda, nothing further.”

Got a Borderstan crime report this evening from EveryBlock Washington, DC. Here’s the report.

END_OF_DOCUMENT_TOKEN_TO_BE_REPLACED

From Alert DC, a robbery on the 1200-block of R Street NW on Saturday night/Sunday morning:

National Guard troops at the corner of 15th and R NW on Monday afternoon.

UPDATE at 11:40 p.m.: Just back from walking the dog. I talked to two groups of the guardsman and the guys here in Borderstan are from Iowa.

I saw National Guard troops in Borderstan this afternoon. These guys were at the corner of 15th and R NW next to the Fifteenth Street Presbyterian Church; a few minutes later they joined a larger group at 14th and R NW. Anyone know their exact mission?