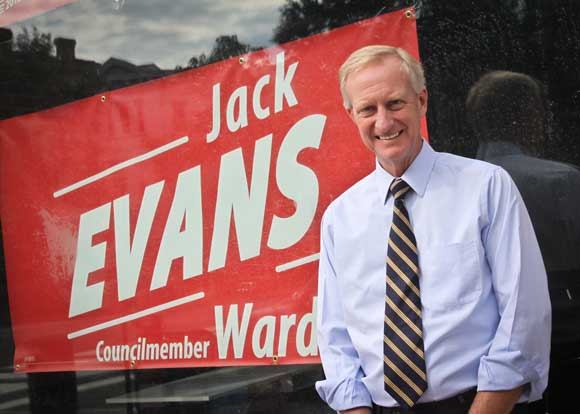 First it was baseball, now it’s the theater.

From now until next Tuesday, Evans will hand out up to two free tickets to Ward 2 residents on a first-come-first-serve basis.

Sherri Kimbel, the councilmember’s director of constituent services, said the free Shakespeare passes shouldn’t sell out quite as quickly as the Nationals tickets did last week.

“I could not believe how fast we went through the Nats tickets,” Kimbel said over e-mail. “We usually don’t go through the Shakespeare tickets as fast, so folks should be okay for a while.”

Ward 2 residents interested in picking up a pair of free theater tickets should email Amorde Brabham at [email protected].

Andrew Veenstra as Valentine and Natalie Mitchell as Silvia in the Shakespeare Theatre Company’s production of The Two Gentlemen of Verona, directed by PJ Paparelli. (Photo by Scott Suchman)

No one does teen rom-com dramady quite like Shakespeare. Even modern(ish) movies like 10 Things I Hate About You or She’s the Man try to recreate and capture the comedy, angst, passion and, yes, drama, of Shakespeare’s plays about young obsessive love.

So what better way to show this than: to lace Shakespeare with some boozing, deliver scene change narration through text message banner above the stage, self-mutilate via cutting, display dramatic threats of suicide, and use karaoke between two people who pretend  (unconvincingly) not to be in love?  Shakespeare Theatre Company’s most recent opening, Two Gentlemen of Verona, does all of this and more.

One of Shakespeare’s earliest and lesser-known plays, “Two Gentlemen” has the stuff of a true teen drama. Two friends argue about love; one (Proteus) is madly in love, the other (Valentine) swears he’ll never love. Spoiler alert: Valentine is wrong! But things really get crazy when Proteus forgets about his love (Julia), and decides that the only chick for him is Silvia, the girl Valentine loves.

And if teen dramady isn’t for you, how about rock opera? The play is peppered with rock tunes that keep the play moving along. You won’t even need to consult your synopsis to know what’s going on with this installment from the Bard!

Want the rest of the story? Two Gentlemen of Verona is at the Lansburgh Theatre now through March 4. Go to Shakespeare Theatre Company for tickets and show times.