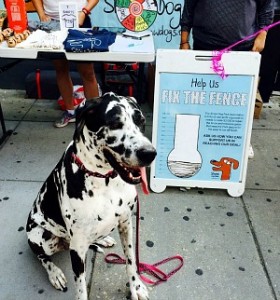 The winter Shaw Dog Park Cleanup Day is this Sunday, December 2, from 11 am to 12 noon. Shaw Dogs asks that you bring garden tools, wheelbarrows and rakes (and remember to wear gloves). Tasks will include picking up litter in and around the park, raking gravel, filing holes, tending the tree boxes and performing some basic repair work.

Caribou Coffee will provide hot cider and treats for all volunteers.

The park is on 11th Street NW between Rhode Island Avenue and R Street and is run by the Shaw Dog Park Association, a non-profit organization, which holds monthly meetings.

Shaw Dog Park is turning four this weekend… and the Shaw Dog Park Association is throwing a party to celebrate!

On Saturday, November 3, join in the festivities with your dog and neighbors. The party will start at 11 am and will include snacks, beverages, a raffle and the opportunity to purchase the new Shaw Dog Park t-shirts, featuring artwork by Branddave.

Shaw Dog Park is at 1673 11th Street NW. For more information on the event, visit the Facebook page.

George and his dogs at the Shaw Dog Park on 11th Street NW. (Luis Gomez Photos)

Today we talk to George Kassouf, best known for his role with Shaw Dogs and the Shaw Dog Park on the 1600 block of 11th Street NW.

Borderstan: Many area residents have you to thank for the Shaw Dog Park, at least as they currently know it. What prompted your turn from dog owner to community organizer for park improvements?

Kassouf: Frankly, I just got tired of getting kicked off of fields for letting my dog off-leash. I learned that there were other dog owners around the District organizing for legal dog parks, and I joined forces with them. As far as Shaw Dog Park goes, it really was a team effort of dog owners and non-dog-owners alike, the police, community groups, ANCs [Advisory Neighborhood Commissions], and at least one PTA, believe it or not. Perhaps, I was just the most dogged — I wouldn’t accept no as an answer. But it definitely wouldn’t have happened without the intervention of ANC 2C Commissioner Alex Padro, Councilmember Jack Evans [D-Ward 2} and then-Mayor Adrian Fenty.

Borderstan: Most people think DC is a bureaucratic nightmare, especially when it comes to grants and money decisions. After going through the grant process, do you agree? What advice do you have for other residents considering going after a grant?

Kassouf: Applying for the grant was a piece of cake. The nightmare came after the award letter, when you have to report to several agencies, not just one, both quarterly and annually. I had a very difficult time with the bureaucratic-speak.   But the recent improvements at the dog park that came from the Neighborhood Investment Fund grant definitely made it worth the hassle. I would encourage others to go after the grant but just be ready to enter a world of confusing jargon.

Borderstan: If you encountered a hypothetical concerned taxpayer, how would you assure them the grant money was well-spent in the dog park improvements?

Kassouf: I would invite them to the dog park on any evening to watch people who might never cross paths socializing and talking to one another. That’s what makes a neighborhood. The dog park is our own front porch, where we can gather after work to relax and spend time with our best friends and perhaps some new friends. And for those who might criticize spending money on dog parks, I’d argue, we spend gobs of money building soccer fields not for soccer balls but for soccer players; we construct tennis courts for tennis players, not tennis balls. The same applies to dog parks; it’s for the dog owners.

Borderstan: Dog park etiquette time — what’s the worst breach of it that you’ve seen? How should an owner respond?

Kassouf: That’s a hard question perhaps because “breach” is such a harsh word. I do get ticked off when owners aren’t watching their dogs and fail to notice when they poop and then you have to find the owner and notify him or her (who might be staring at his or her phone). My biggest beef though is when someone comes in with more than the three dogs. The law allows only three, and I know that having my two in the park completely occupies my attention. There is no way to effectively watch more than three.  More than three, to me, becomes a safety issue.  I’ve tried to stop several dog walkers from doing so several times, and have been verbally and physically assaulted.  If you see that, call the Urban Park Rangers — the enforcement arm of the Department of Parks and Recreation– to let them handle it.

Borderstan: What is necessary for a ‘good’ dog park, in terms of amenities? Or conversely, what should dog parks in DC avoid in the future? (Author’s note: I used to live directly by the 17th and S NW Dog Park.)

Kassouf: A dog park needs to be at least 10,000 square feet. Otherwise, it just gets too crowded and that can be a bad mix, despite everyone’s best efforts. There is really no one to prevent overcrowding — all the dog park rules are self-enforced — and creating a large enough fenced-in space can take that problem off the table. You have to have running water both for hydration for the dogs and for cleaning the surface. When it’s hot outside, the odor can be a bit overwhelming, so you need to be able to wash it.  To make the dog park even better, have plenty of benches and shade. It really does transform the public space.

Borderstan: You also run your own business in Shaw, as a personal trainer. How would you rate DC as a place to be a small business owner?

Kassouf: DC law and regulations made it relatively easy to start up my own business. Now, I have a one-person shop — it’s just me. I don’t know how simple it would be if you have employees and have to comply with additional worker-related laws.

Borderstan: You’re clearly committed to the neighborhood. How long have you been in Shaw? What prompted you to move to DC and to Shaw?

Kassouf: I moved to Shaw almost 10 years ago, and I chose this area because it was the only affordable house I could find and still be close to the things about this city that I like —  movies, restaurants, the Mall, parks, etc. And I wanted to buy a house so that I could have a dog again.  I missed that.

Borderstan: Best ‘new and improved’ changes in Shaw (you can’t count your own project!)? Least pleasant change or transition?

Kassouf: More people adopting dogs is one of the best changes!  In addition, I love seeing some of these old crumbling buildings get restored, get a second life.  Least pleasant change — less on-street residential parking.

Borderstan: What are the best places to go out in Shaw that correspond to your personal training business — and what are we allowed to order? Best doggie-friendly places in the area

Kassouf: You can find whatever healthy or unhealthy thing you’re looking for at any restaurant. I’m a vegetarian, so I can scan a menu fairly quickly to find what I want. With respect to my personal training business, I say “eat up, eat big” — it keeps me in business!  No, seriously, you can find yummy, healthy dishes at any local restaurant.

What we tend to overlook though when we eat out, which adds a lot of calories to a meal, is alcohol. With respect to dog-friendly places, I like the patio of Hotel Helix, the outside eating area of The Commissary, shopping in Logan Hardware and Pulp, and being able to take my dogs into TD and PNC Banks. Combining errands with dog-walking makes life a little smoother.

The Shaw Dog Park Association will hold its first annual meeting on Wednesday, January 18. Time is 7:30 to 9 pm at Helix Hotel, 1430 Rhode Island Avenue NW. The group asks that you register in advance for the meeting on Eventbrite.

The association recently obtained official non-profit status as a 501c(3) non-profit corporation, apart from MidCity Residents Association. Members will elect a board of directors on the 18th. If you are interested in serving on the board, please contact George Kassouf at [email protected]

The park is on 11th Street NW between Rhode Island Avenue and R Street NW.