Two more sidewalk robberies involving “force and violence” in the northern part of the Logan Circle neighborhood (Police Service Area 307), both on Memorial Day but at different times. However, the two robberies occurred about two blocks apart.

The first robbery was in the early morning hours, at 2:30 a.m., at 11th and Vermont NW. But, the other crime was in broad daylight at 8:53 a.m. on the 1700-block of 13th Street NW (near R Street). This second robbery is more disconcerting–this area is well-traveled are in the daytime, full of dog walkers, joggers and passing cars.

END_OF_DOCUMENT_TOKEN_TO_BE_REPLACED 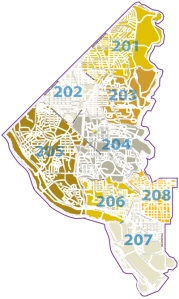 Over the past three days, the Second District experienced a series of street robberies in which victims were knocked to the ground and had purses or other property taken from them. I am happy to report that last night, we arrested 2 subjects that we strongly believe were responsible for the vast majority of those violent cases. The arrests were made after bringing in additional resources to the Georgetown and Dupont area in order to provide support to 2D units as well as provide high visibility to prevent further crimes. These subjects were apprehended as a result of excellent work by patrol officers, members assigned to our office of communications, and MPD detectives. – Commander Matt Klein, MPD Second District