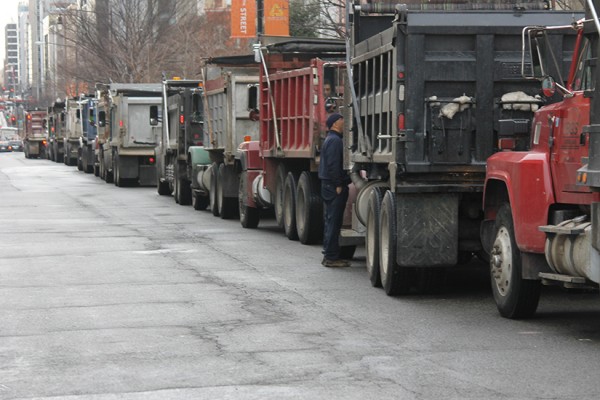 A fleet of dump trucks enlisted to haul away snow astounded and annoyed some people driving near Dupont Circle earlier today.

The haulers, hired by the District to transport slush and snow out of city streets, caused some traffic backups as they lined up on 18th and 19th streets NW, Connecticut Avenue NW and the road surrounding Dupont Circle.

Naturally, some locals took to Twitter to talk about the traffic. Here’s a snippet of what they said throughout the day: END_OF_DOCUMENT_TOKEN_TO_BE_REPLACED 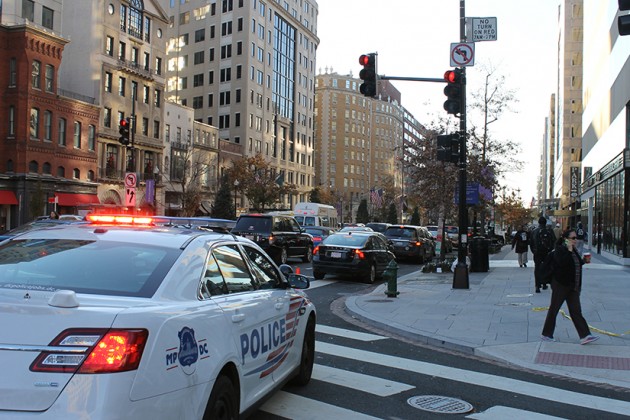 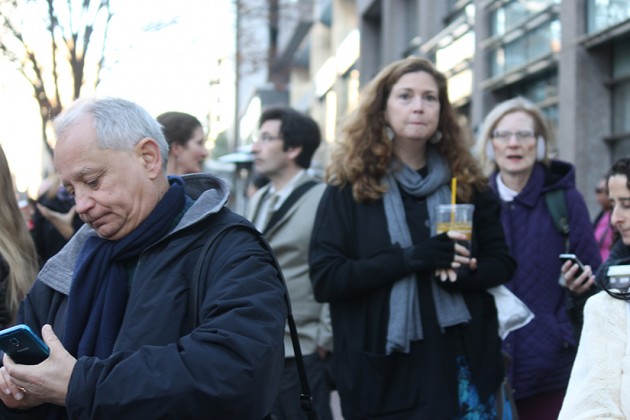 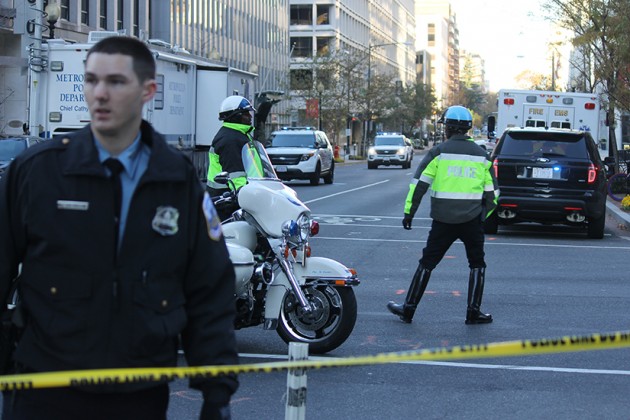 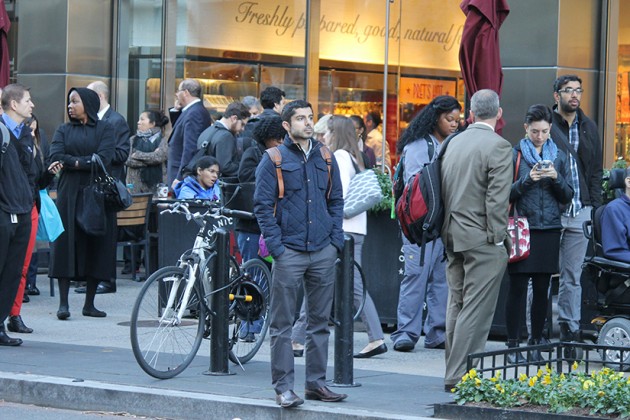 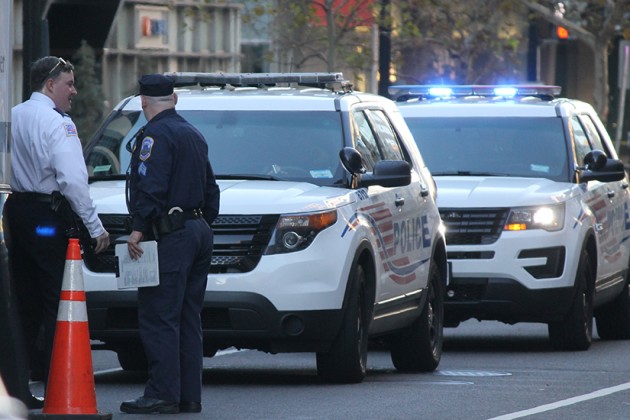 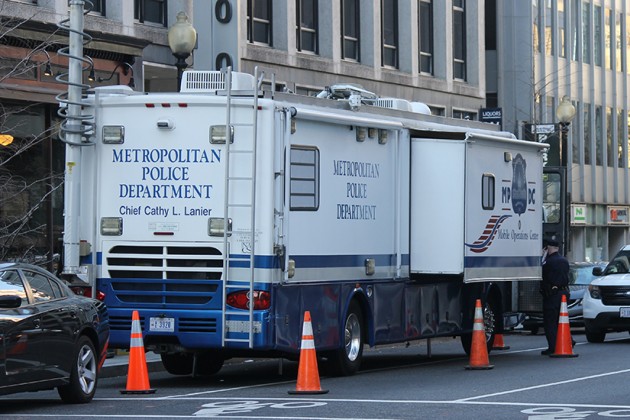 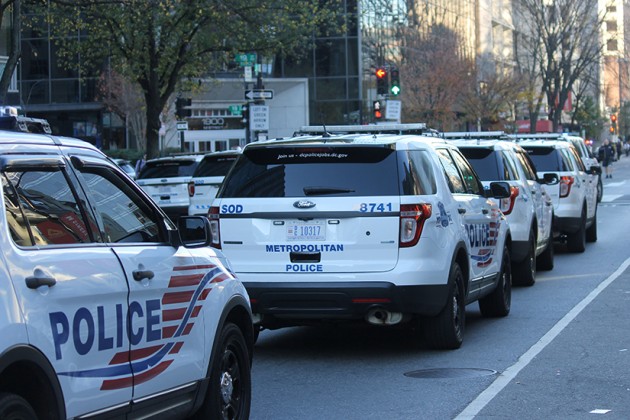 (Updated at 5:12 p.m.) D.C. Police have brought charges against a woman who barricaded herself in an office building, prompting an hours-long standoff that snarled traffic downtown and in Dupont earlier this morning.

Police said they were alerted to a woman who was threatening harm to herself and others near an office building on the 1900 block of K Street NW at approximately 12:19 a.m. this morning. When officers arrived, the woman fired a gunshot, and a “barricade situation was declared.”

The standoff that followed lasted for more than 10 hours and resulted in several road closures throughout the area.

Authorities took 31-year-old Sophia Dalke of Springfield, Va., into custody after she peacefully surrendered around 10:30 a.m. today. They later charged Dalke with assault on a police officer while armed.

Police tweeted earlier this morning that the incident was not an “active shooter situation,” and that the woman in crisis was “contained.” An officer at the scene said he believed no pedestrians were in danger and that the street closures were precautionary in nature.

Some commuters were even locked out of their office buildings this morning, and many were observed congregating near the intersection of 19th and L streets NW.

As one person in the crowd put it earlier this morning “this city looks like a parking lot right now.”

The 2012 Jingle All the Way Race. (Courtesy of Pacers)

Borderstan, it’s time to lace up your racing shoes (and pull-out your best santa costume, if you feel so inclined).

The 9th Annual Pacers Jingle All the Way 8K and Kid’s Dash is Sunday, December 9, and this year’s race benefits Habitat for Humanity for DC and its efforts to build affordable housing in the District.

The race begins at 9 am at Freedom Plaza/Pennsylvania Avenue. Registration is $35 and is available online.

Borderstanians: I learned today that the city has decided on a traffic reconfiguration plan for 15th Street NW. It will have two-way bicycle lanes, but keep three northbound lanes of traffic (see “Reconfiguration of 15th St. NW: What We’re Getting.”)

On Jan. 31, I posted a poll here at Borderstan.com, asking readers, “Should 15th St. NW be a 2-way traffic street?” Below are the results (as of Feb. 19) of this extremely unscientific and unreliable public opinion poll. Remember that anyone can/did offer their opinion, regardless of where they live.

The southwest corner of 15th and R NW. (Photo by WasWoWashington on Panoramio.)

Borderstanians: I received an email today from Christopher Ziemann at the DC Department of Transportation (DDOT) about the plans to reconfigure traffic on 15th Street NW (Borderstan’s Main Street).

DDOT has decided to implement Alternative 5, which was not part of the original four alternatives that were proposed for 15th Street. You can view Alternative 5 at DDOT’s Web site; go to page 2 of the PDF.

Here is what will happen to 15th Street under Alternative 5:

END_OF_DOCUMENT_TOKEN_TO_BE_REPLACED

For Borderstanians, 15th Street NW is essentially our Main Street. It cuts through the middle of Borderstan–dividing the area between two neighborhoods (Dupont and Logan), two police districts and two PSAs (208 and 307) and two Advisory Neighborhood Commissions (2B and 2F).

END_OF_DOCUMENT_TOKEN_TO_BE_REPLACED

As we wait for the D.C. Department of Transportation’s recommendation on what to do with 15th Street NW, here is an idea: a traffic circle at 15th / W/ New Hampshire / Florida. Saw this critique of the idea at Greater Greater Washington… original post at Monumentality:

Monumentality suggests a circle (technically a modern roundabout) for the intersection of 15th, New Hampshire, and Florida Avenues NW, at the bottom of Meridian Hill Park. The far-too-wide 15th meets these avenues in a giant intersection with too many lanes, long crossing distances for pedestrians, and hazardous bicycling. How about a circle?

You can see the alternatives being considered for 15th Street NW here at DDOT’s Web site.

Front page (PDF) of the August 13 Dupont Current… read about a proposal to remove the reversable traffic lane on upper 16th Street from Irving Street to Arkansas Avenue and install a median:

“At a Monday meeting to discuss the impact of the D.C. Department of Transportation’s pedestrian master plan on Ward 4, proposals to change the face of 16th Street provoked some residents’ concern. The plan, which was developed over 18 months, aims to make D.C. “a city where any trip can be taken on foot safely and comfortably and where roadways equally serve pedestrians, bicyclists, transit users and motorists,”