Controversy is brewing over the arrest of a trans-rights activist during a protest in Columbia Heights yesterday evening.

Local activist Jes Grobman was arrested after she and other demonstrators blocked the intersection of 14th and Irving streets NW last night to protest violence against trans people.

In the version of the video posted to Facebook, officers can be seen pulling, then dragging Grobman, pushing her against a police car and eventually handcuffing her. Several onlookers can be heard screaming and telling the officers to “let go of her” throughout the video.

According to the police report obtained today by Borderstan, Grobman “made several attempts to place herself in harm’s way by standing in the direct path of moving vehicles.” When an officer “advised [Grobman] … to move out of the path of the moving vehicles,” Grobman “chest bumped” the officer, said police.

But fellow trans-rights protestors tell a different story. In a MetroWeekly article about the arrest, several activists said they saw a police officer push Grobman before she was detained.

Others complained that officers failed to provide names or badge numbers when asked and failed to adequately warn Grobman before they arrested her.

Grobman, who reportedly spent the night in jail, was ultimately charged with assault on a police officer and failure to obey traffic, both misdemeanors.

The National LGBTQ Task Force, one of the non-profit organizations who helped organize last night’s protests, criticized the officers who arrested Grobman in a statement released today:

END_OF_DOCUMENT_TOKEN_TO_BE_REPLACED 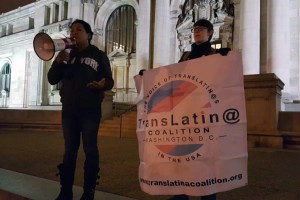